As rivals keep garnering low scores in polls, Prime Minister Benjamin Netanyahu portrays himself as a mega statesman and his opponents as lightweights. 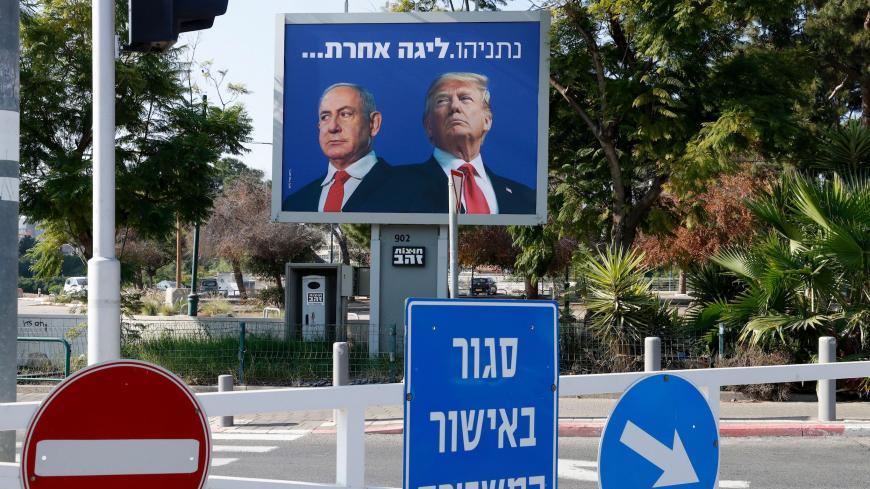 A billboard depicting Israel's Prime Minister Benjamin Netanyahu (L) and US President Donald Trump side by side with a slogan in Hebrew, which reads "Netanyahu, a different league," in the Israeli coastal city of Tel Aviv, on Jan. 10, 2021. - JACK GUEZ/AFP via Getty Images

This is Prime Minister Benjamin Netanyahu’s 10th election campaign for the premiership since 1996, but it will be the first time in which Netanyahu is competing against himself.

At least five party heads are in a race for the premiership in elections that will take place on March 23. But none of the five has succeeded in positioning himself as a leading alternative to Netanyahu.

According to recent polls, Netanyahu is getting stronger with about 30 mandates in his pocket. The next party in line is New Hope, headed by former high-level Likud member Gideon Saar; the polls allocate about 16 mandates to him. Under Saar is opposition chairman Yair Lapid and Yamina chairman Naftali Bennett, each group with only a small number of mandates. Netanyahu leads all of these by a significant margin, regarding the ability to govern the country as prime minister.

Like the mythical phoenix, Netanyahu rose above the others in the last two weeks, courtesy of the anti-COVID-19 vaccine project that he leads. Israel has crossed the 2 million-people vaccination bar (with a first dose) and is viewed as achieving a world record. However, COVID-19 has its own ways of surprising people. Just when Netanyahu and Israel’s public started to see the light at the end of the tunnel and Netanyahu announced in a leaked private conversation that “COVID-19 is finished,” the third wave began with great intensity.

In fact, it was the strongest wave since the eruption of the epidemic. Israel crossed the bar of 4,000 dead over the weekend. The hospitals are unusually swamped, including very ill young people and pregnant women. The economy and the educational system are under tight closure.

All of this constitutes Netanyahu’s weak spot just two months before elections — not the trial against him, not his relationship with President Donald Trump or the arguments against him for creating schisms in the population. The challenge faced by Netanyahu at the moment is Israel’s morbidity and economic crisis, together with the inability of the government he leads in enforcing closure in the ultra-Orthodox public that doesn’t follow orders. Netanyahu is viewed as having capitulated to the rabbis due to political considerations; this translates into great power for his opponents.

According to medical experts, the current harsh wave is the result of the British mutation that penetrated Israel in recent weeks. This version is much more contagious than the original virus. This, of course, is something that Netanyahu could not have predicted. He thought the vaccines would be a game changer that would stamp out COVID-19 and open the economy while the rest of the world licked its wounds. As it happens, his rivals are now conducting a tough campaign against what they call his resounding failure regarding the pandemic that has exacted many victims and brought catastrophe to the economy.

If not for the British mutation that took everyone by surprise, Netanyahu would have already continued to gallop forward and dwarf all of his opponents. That is also the strategy of this current campaign: masses of politicians, but only one leader. Netanyahu sells himself as a super statesman and leader who led his country to historic peace agreements and an unprecedented vaccination project. The campaign pictures show a large portrait of Netanyahu next to a group of small, undersized politicians. Netanyahu’s Twitter and Facebook pages show pictures and video clips of him visiting vaccine storehouses, with the wording “the million” and “the second million.” He also likes to extract compliments from media outlets throughout the world regarding the Israeli vaccine project. We will be the first state to get out of COVID-19, he promises the public.

There is another way in which this current campaign differs from all of its predecessors. This is the first time that elements of hope overcome those of fear. Netanyahu is known for his intimidation strategies, as a follower of Jewish-American polling/political consultant Arthur Finkelstein. Netanyahu’s past campaigns included the following elements: intimidation vis-a-vis the Iranian bomb, and intimidation vis-a-vis any territorial compromise with the Palestinians that would place Israel’s central cities under danger of missiles from Gaza.

Usually, however, Netanyahu ran against a center-left rival and it was easy for him to label such rivals as weak and also dangerous regarding the issues above. Now, however, two of his rivals are also right-wingers — Bennett and Saar — thus right-wing messages are superfluous. And so, instead of messages of warnings or threats, Netanyahu focuses his campaign on his own self vis-a-vis the other “lightweight” politicians. At this point in time, it is very difficult to prophesize how the elections will play out. What we can say is that 71-year-old Netanyahu, who was eulogized many times, gets up every morning with a fierce hunger to win. He ignores all his opponents and, unlike in the past, he does not wage head-to-head battles with them.

Netanyahu is the only one who succeeds in leading an agenda. Last week, he opened a campaign of canvassing for votes in the Arab sector, dragging everyone else to respond. He forced his rivals to praise him (half-heartedly) on his vaccine project. Despite COVID-19 limitations, Netanyahu still goes out to the field — mainly vaccine sites — or to the airport to personally receive vaccine deliveries, and to hold Zoom sessions with the public. This morning he tweeted, “Yesterday, 186,000 people were vaccinated in one day — a new record! 2.2 million Israelis are already vaccinated. We go forward, full steam ahead: We’ll open up our economy and get back our lives!”

The man does not rest. He is the first to realize that each of his competitors is a lightweight, but he is well aware that should they unite against him after the elections if he doesn’t receive 61 seats, then he would have to step down.

One of the Likud ministers spoke to Al-Monitor on condition of anonymity and described the situation thusly: “Netanyahu is waging war against himself. His battle is not against his competitors, but against the current reality: the British mutation and the economic crisis. I see him as an Olympic runner who has no competitor on his level; instead, his enemy is the clock, and he is running out of time to prove that he conducted the COVID-19 crisis well. Last week, things looked different with the vaccines, but suddenly the British mutation is erasing his success and his big achievement is slipping away.”