Prime Minister Benjamin Netanyahu's popularity is falling amid a spike in coronavirus cases. 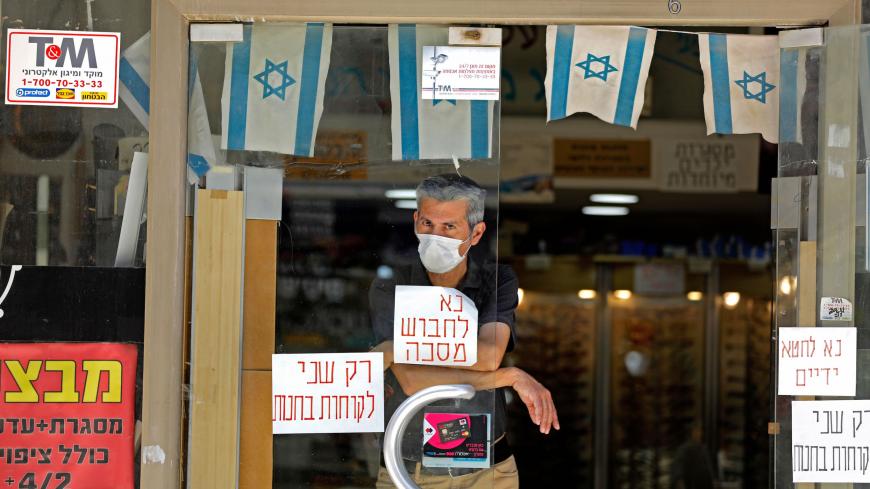 A man wearing a protective mask amid the COVID-19 pandemic stands in a shop with a sign on the window reading "Please wear a mask" in Hebrew Jerusalem on July 7, 2020. - MENAHEM KAHANA/AFP via Getty Images

Only a week ago, Prime Minister Benjamin Netanyahu was busy trying to salvage his annexation program and even toyed with the idea of dismantling the unity government and calling for new elections. The polls showed him reaching new heights with over 40 mandates despite the trial he faces and despite the expensive and bloated government he cobbled together when hundreds of thousands of citizens are unemployed.

But on June 6, at the very last minute, the prime minister stepped on the brake. Netanyahu convened the coronavirus cabinet in an emergency Zoom meeting and approved a list of stringent measures in an effort to halt the second wave of the disease, a round that looks even more severe than the first.

Israel is now seeing more than a thousand infected people a day — more than any European country. Israeli hospitals began to fill up with patients in serious condition as the economic status of hundreds of thousands continued to deteriorate. Israel, which had served as a global model for treating COVID-19, could be heading for another lockdown.

How bad is it? At the bleak meeting that went on for hours, Netanyahu warned against a loss of control that could lead to another full lockdown, saying, “The pandemic is spreading — that's as clear as day. It is rising steeply daily and it is dragging with it, contrary to what we had been told, a trail of critically ill patients. … If we don’t act now, we’ll find ourselves with hundreds, perhaps even more than a thousand seriously ill people in the coming weeks. And this can paralyze all our systems."

The harsh picture was effective. Without argument, the ministers approved a list of limitations to be imposed immediately on the public: the closing of event halls, physical fitness centers, gyms and swimming pools as well as limitations on the use of public transportation in a serious blow to the economy. Later that night, Netanyahu led an accelerated process in the Knesset to pass a law allowing the government to side-step the parliament to “fight COVID-19.” The unprecedented move led the opposition to cry out against a “black day" for Israeli democracy.

The members of Blue and White were uncomfortable, but Blue and White chair and current Defense Minister Benny Gantz got the message that Israel faces a real emergency and instructed his ministers to toe the line.

Only two weeks ago, Netanyahu was on top of the world. What happened to the man who succeeded in luring Blue and White into his government and decimating his only governmental alternative, all while being tried for corruption?

At first, things seemed under control. Netanyahu seemed unbeatable, celebrating his victory over COVID-19 at a press conference and encouraging civilians to go out and celebrate. He boasted that leaders from all over the world were calling to consult with him and promised that in August the skies would open up and Israelis would be able to vacation abroad. Once Israel’s COVID-19 curve had flattened, the government began to remove limitations on its citizens. There were no preparations for a possible second wave and Israelis left their homes to party.

But Netanyahu belatedly came to understand that the second COVID-19 wave was hitting the country hard and wiping out all his achievements in the first round. The big question is: Is it too late for Netanyahu’s political future and for the hundreds of thousands of citizens who are likely to find themselves unable to feed their families within the next few weeks and months?

Now there is fury and despair. Over the next few months, many businesses and households are predicted to find themselves heading toward bankruptcy, warned Sigal Yakobi, Israel's top official who handles bankruptcies.

Netanyahu did not have to wait for the Channel 12 poll released July 6 to realize that his popularity is going down on all counts. The public gives him low grades regarding his economic and health decisions in the COVID-19 crisis and the disapproval is reflected in the decrease in mandates: After reaching 41, the Likud has sunk to 37. However, Netanyahu is still Israel’s strongest leader and has tremendous advantages over all other contenders. For example, Gantz received only 11 mandates in the poll, and opposition chairman Yair Lapid only 15.

The drop means that neither Netanyahu nor Gantz can afford to dismantle their partnership. As he rose in the polls, Netanyahu was assumed to aiming for new elections. Now, however, it appears that he has lost his momentum. Netanyahu and Gantz are entirely dependent on one another, which is also why the annexation issue is likely to disappear in the near future. “They came to understand only recently that nothing is more important than dealing with the corona crisis properly; it is the only issue that can bury them both politically,” a senior member of Blue and White told Al-Monitor on condition of anonymity.

Netanyahu survived, even flourished politically in the last decade because of two things: Israel’s sturdy economy and the prosperity that jump-started the standard of living of the middle class. Millions of Israelis traveled abroad and consumer spending broke records. Unemployment was down and Israel won high world rankings in innovation and happiness. Netanyahu celebrated many of these achievements on the social networks, contributing to the general sense that under him, Israel is a good place to live.

The second element that contributed to a positive recent sense of welfare was the good security situation. Netanyahu avoided wars and took calculated risks vis-à-vis Syria, Iran and Hezbollah. Thus, except for infrequent terrorism within Israel, citizens enjoyed a high level of personal safety.

Now that Israel’s economic prosperity is declining, Netanyahu’s electoral power can be expected to take a hit, and he knows it. Yesterday he announced that he will present another economic aid program within 48 hours. Still, it is not at all sure that Netanyahu can extricate himself from an economic and political downward spiral.