On the eve of the second lockdown, Prime Minister Benjamin Netanyahu is blaming everyone but himself for Israel's failure to cope with the pandemic. 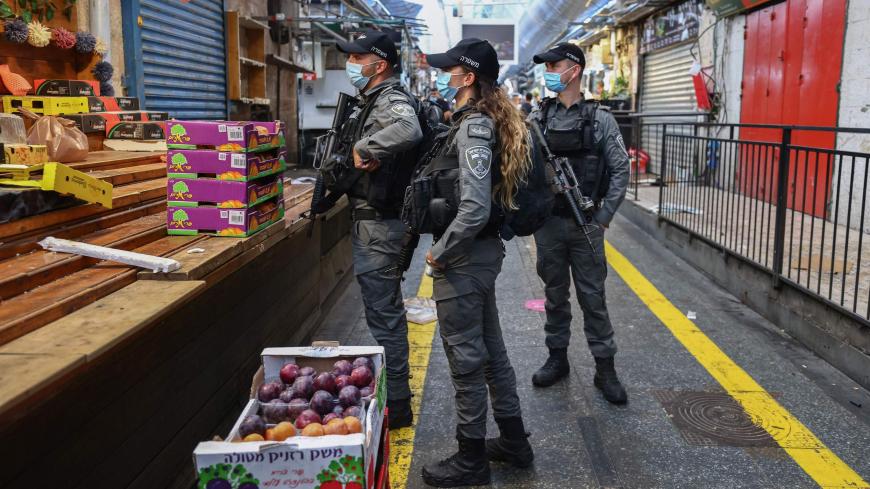 Israeli border police officers talk to a shopkeeper while on patrol in Jerusalem's main market during closure on Sept. 25, 2020, as a series of measures to strengthen a second COVID-19 lockdown imposed last week takes effect. - EMMANUEL DUNAND/AFP via Getty Images

Israel got the biggest and most destructive surprise in its history on Oct. 6, 1973. On the afternoon of Yom Kippur, as Jews were marking the holy day by fasting and praying to atone for their sins, the armies of Egypt and Syria launched a massive coordinated attack on Israeli troops in the Sinai Peninsula and Golan Heights. Thousands of tanks crossed the borders, setting off ear-piercing warning sirens throughout the country and signaling the start of the Yom Kippur War. The Israeli empire, which extended in those days from the shores of the Suez Canal in the south to the summit of Mount Hermon, a stone’s throw away from Damascus, in the north, found itself under existential threat.

The Israel Defense Forces, which just seven years earlier had speedily and easily defeated the Arab armies besieging the state’s narrow borders in the Six-Day War, was caught unaware as the enemy advanced. The Egyptian army crossed the Suez Canal, overrunning Israel’s fortifications, and inflicted heavy casualties on the Israeli troops. In the north, an armored Syrian force swept through the Golan Heights, threatening the Sea of Galilee and town of Tiberias below. Defense Minister Moshe Dayan, the iconic symbol of Israel’s Six-Day War victory, darkly warned of the impending demise of the Third Temple — essentially, Israel’s annihilation.

The IDF, with the help of a US weapons airlift, eventually blocked the enemy advance, turned the tide and ended the war at an advantage — small consolation for the families of the 2,800 dead, tens of thousands wounded and hundreds taken prisoner or missing in action. Israeli arrogance and smugness over the 1967 victory were replaced by a sense of defeat and despair. The Yom Kippur debacle shook the foundations of the young state, resulted in the eventual downfall of the Mapai Party that had run it unchallenged for 25 years and left an entire generation deeply traumatized to this day.

As Jews prepare to observe Yom Kippur starting at sunset Sept. 27, the climate is reminiscent of those dark days. This time, the enemy is not an Arab nation, but rather the coronavirus pandemic.  As it was 47 years ago, Israel of 2020 is again the victim of a critical intelligence and operational failure and criminal negligence by an obtuse leadership oblivious to the impending disaster. With over 1,300 dead and the highest infection rate in the world, Israel has become the sick man of the Mediterranean. With infection rates on a relentless upward trajectory, Israel entered a near total lockdown on Friday, Sept. 25.

Less than 24 hours before the lockdown, Prime Minister Benjamin Netanyahu addressed the nation on prime time television. He assumed no responsibility, admitted to no mistakes and did not engage in any soul searching. He blamed the public, the Knesset, the protests against him, various segments of society, the political opposition and, of course, the disease itself.

To date, his accusatory tirades have not helped Netanyahu extricate himself from the hole he has dug. His ratings have plunged to record lows and his Likud Party continues to decline in the polls. The public has lost trust in Netanyahu and every other instrument of government. Israel's defense minister and alternate prime minister, Benny Gantz, and his Blue and White Party are perceived as collaborators with Israel’s bloated and helpless government and faring no better. Chaos and civil disobedience appears to be sweeping the country. The vaunted high-tech nation is sinking, a state accustomed to its image as a winner now a loser.

The sense of helpless and anarchy is also eating away at the political system and changing the balance of power, according to the polls, in which the ruling coalition parties that now command 74 Knesset seats have lost 20. The sole winner of this mess is Yamina chair Naftali Bennett, the only political figure the public feels could vanquish the epidemic if Netanyahu would only give him the reins. During his brief stint as defense minister prior to the formation of the current government, Bennett displayed creativity and initiative in facing the first COVID-19 wave, which culminated in the Passover eve lockdown in mid-March. Bennett was a lonely voice in those days and despite his impressive activism, Netanyahu refused to appoint him coronavirus czar, likely fearing his popularity. After initially impressive results in quelling the first wave, Netanyahu rushed to bring life back to normal, exhorting Israelis to go ''have fun” in a triumphant May 26 broadcast.

Three months and much gross mismanagement later, the epidemic is back with a vengeance. Netanyahu seemed oblivious of the warning signs and mounting infection rates, preoccupied with his criminal indictment and his machinations to dismantle the government and call early elections to avoid his trial. When he finally acknowledged the overwhelming health and economic crisis facing Israel, it was too late.

Bennett is undoubtedly the winner, surging in the polls to over 20 Knesset seats compared to the seven his right-wing national-religious party now holds. Netanyahu’s Likud, on the other hand, polled at 29 seats in results aired on Sept. 23. The gap between the two is narrowing for the first time in years and the leader of the Israeli right is no longer a foregone conclusion. The playing field is now wide open.

The coronavirus is threatening Israel’s political map. If Bennett's party keeps surging and threatens the hegemony of the Likud, he could become kingmaker. Not only is Bennett no longer in Netanyahu’s pocket, the reverse may be true. In private conversations, Bennett, who is furious at Netanyahu for leaving Yamina out of the government after the March elections and is seeking revenge, talks about Netanyahu as a “has been” and “a clear and imminent danger to Israel’s national security.”

If the current polling is translated into electoral results, Bennett will face a tough decision. A strong showing that puts his party on a near equal footing with the Likud would likely win a power-sharing offer from Netanyahu. Should Bennett believe Netanyahu or opt for a salvage coalition with disparate parties (Yesh Atid, Blue and White, Yisrael Beitenu and others) with the goal of ousting Netanyahu? Unlike Gantz, who ignored warnings and believed Netanyahu’s promise to hand over the premiership to him in the second half of the government’s term, Bennett will not be so gullible. He could even get to go first in a power-sharing rotation deal with Netanyahu.

However, elections are not in the cards at this point. Given his polling figures, Netanyahu wouldn't dare risk new elections in December, the next exit point from his deal with Gantz. If Netanyahu remains with his current coalition, his rotation with Gantz will come in late 2021. The virus could turn out to be the only force strong enough to unseat the prime minister who has been running Israel for almost 20% of its history.