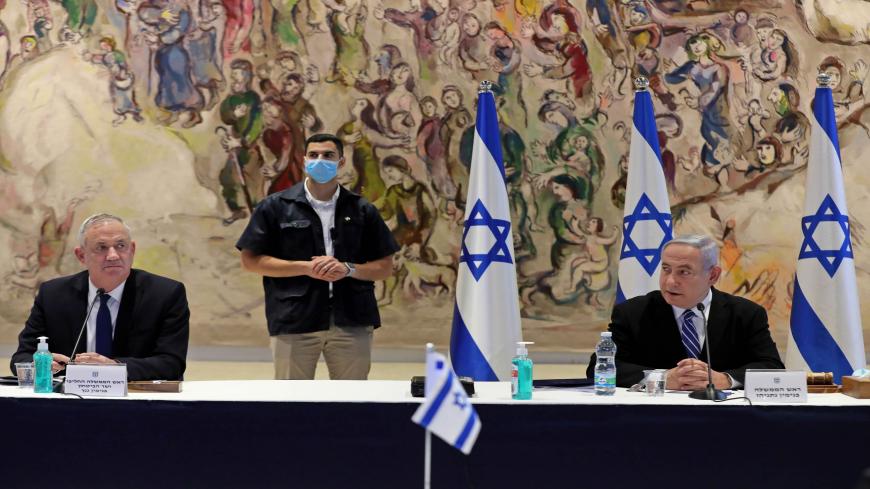 Blue and White Chairman Benny Gantz, who is Israel's alternate prime minister and defense minister, hoped that the series of interviews he gave to the country's three main TV stations July 15, from isolation in his home in Rosh HaAyin, would ameliorate his public relations failure — if only partially.

The interviews were prerecorded and supposed to be broadcast on prime-time evening TV, with the goal of creating a buzz. Gantz came prepared with a page of messages to the public and two headlines: One addressed the possibility that Israel would renew a countrywide lockdown, in light of the daily escalation in the spread of the virus that causes COVID-19. The second headline involved Gantz’s insistence on a two-year budget, as opposed to Prime Minister Benjamin Netanyahu who seeks a one-year budget. This last difference of opinion could, in an unlikely scenario, even lead to elections.

But while Gantz was preparing for his important interviews, Netanyahu and Finance Minister Israel Katz were busy putting the finishing touches on another whirlwind economic plan to be presented during a press conference. Netanyahu intended to take over the public agenda that day, just as Gantz was readying himself to do the same.

Over the last few days, Netanyahu has had to deal with a rising wave of protests and demonstrations; he needed an immediate “fix” to calm down the masses. The previous night, on July 14, a stormy demonstration had taken place opposite Netanyahu’s house on Jerusalem’s Balfour Street, which ended with dozens of arrests and a sense of loss of control. Similar to the decision of US President Donald Trump to dispense money to the public at the beginning of the coronavirus crisis, Netanyahu decided on an immediate dispensation of grants to all the country’s citizens.

Gantz was updated by Netanyahu and Katz on their intentions to divvy up 6 billion shekels ($1.75 billion), only several hours before the July 15 press conference.

Even though Gantz bears the title of alternate prime minister, Netanyahu and his people did not consult with him or take into consideration Gantz’s principled opposition to handing out money without distinguishing between those who truly need help and those who don’t. Gantz's approach is the one recommended by the highest levels of the Finance Ministry, headed by the governor of the Bank of Israel.

Netanyahu simply announced his decision to the alternate prime minister. True, the prime minister suggested that Gantz himself take part in the press conference, but even Gantz understood that this would cause him more harm than good, and refused to appear.

The bottom line is that Gantz’s interviews were overshadowed by the tremendous noise caused by the live press conference, resulting in hundreds of thousands of citizens glued to their TV screens. Once again, Netanyahu took control of the public agenda and, after several long weeks of “COVID-19 hibernation,” returned to the front lines. As expected, the Netanyahu-Katz proposal was attacked on all sides and still needs government approval. But it achieved its purpose: There is less talk on the streets about demonstrations and, should Gantz oppose the move, Netanyahu will still emerge as the figure who tried to assist and aid the public.

The event described here is another expression of the severe crisis of confidence between Netanyahu and Gantz — two people who promised the public to resolve the coronavirus crisis. But they have not succeeded in creating a mechanism for working together in harmony and partnership to resolve one of the greatest crises ever known by the State of Israel.

Almost everything becomes the subject of argument and tension between the sides: the budget, Netanyahu’s “war” on the legal system, opposing worldviews. To that we add “inflated egos” and the inflated number of ministers from both sides who are fighting to achieve "relevance" — at each other’s expense.

Gantz is sure that Netanyahu is preparing the ground for early elections, and has no intentions of vacating the prime minister’s office in another year and a half, as agreed in the unity deal between the Likud and the Blue and White parties. In this instance, this is not paranoia but a real possibility. Netanyahu, on his part, hates every moment in this government. He became used to ruling with an iron fist, almost alone without real opposition in the government. But now he has to take into account the opinions of the Blue and White ministers as he manages the crisis, and he encounters obstacles. On July 14, he tried to reclose the country’s swimming pools and gyms, and was blocked by the ministers; the issue made its way to the Knesset’s COVID-19 committee, which reversed his decision. The pools and gyms were not closed, causing citizens on the street to feel that something is not right about how the country is run.

“Netanyahu feels like Gulliver in the land of Lilliput. All kinds of young ministers from Blue and White preach to him in government meetings. He is suffering and, in my opinion, regrets that he did not call for elections when he was riding high in the polls,” said a Likud minister to Al-Monitor under condition of anonymity.

On the evening of July 14, on the backdrop of bad publicity regarding the overwhelming spread of the coronavirus, a highly placed Likud member harshly criticized Gantz — and his words were quoted in the media. The Likud member said that the prime minister is furious at Gantz and his party for foiling the steps needed to halt the spread of the infection, and that Blue and White did so for political reasons. “Gantz and Blue and White must put an immediate end to the political games they are playing with regard to COVID-19; this behavior puts the lives of Israeli citizens in danger. Since the unity government mandates that all decisions must be made in agreement between the Likud and Blue and White, they [Likud] torpedo all resolutions that are not in line with their populistic considerations,” the highly placed contact said, thus adding fuel to the fire.

Gantz had no doubt that the words of the Likud official came straight from Netanyahu’s office, and he fought back. A short time later, a Blue and White official accused Netanyahu of trying to place the blame for his own failed treatment of the COVID-19 crisis on Gantz — and that the prime minister is not allowing Gantz, as defense minister, to conduct the anti-COVID-19 fight himself. “This is not the time for politics or any type of [internal] battle — only battles to rehabilitate the economy, health system and society. … There are those who address these issues, and those who flee taking responsibility for them,” the Blue and White official, quoted as an anonymous source, told the press.

As of this morning, efforts were being made by both sides to douse the flames of civil war. Blue and White ministers were interviewed, including Foreign Minister Gabi Ashkenazi, who limited himself to low-key criticism of Netanyahu’s largesse to the nation. That’s what happens when two opposing sides are imprisoned in a nightmare government at the heights of a mega-crisis, and they have nowhere to run.

But the writing on the wall signals another upcoming political altercation, which is expected to erupt very soon. Netanyahu must bring his money-allocation program for approval of the government next week.