Prime Minister Benjamin Netanyahu’s constant machinations and tricks leave Blue and White in the dark as to whether he intends to push for new elections next week. 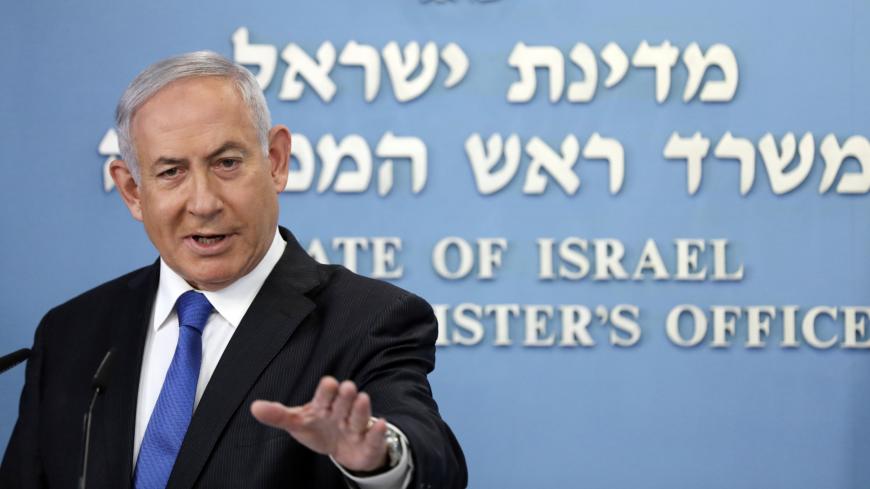 Israeli Prime Minister Benjamin Netanyahu gives a press conference in Jerusalem on Aug. 13, 2020, where he spoke about the Israeli-United Arab Emirates agreement to normalize relations in a landmark US-brokered deal, only the third such accord the Jewish state has struck with an Arab nation. - ABIR SULTAN/POOL/AFP via Getty Images)

On Aug. 19, Prime Minister Benjamin Netanyahu’s convoy pulled up outside Jerusalem’s Mahane Yehuda market, just a few minutes’ drive from his office. It was a sudden, allegedly spontaneous visit. Netanyahu decided that he wanted to hop over to a local vegan restaurant to grab a quick lunch. And if he was already there, this was a great chance to ask the owners of the restaurant whether they already received their coronavirus stipends. They said that they did and thanked him. Of course, there was nothing coincidental about any of this. Netanyahu’s spokespeople filmed the whole thing and posted it online. Netanyahu knew exactly where he was going, and whom he was about to meet. Inevitably, he was greeted with chants of, “Bibi, King of Israel!” After all, the market is considered his home court.

While all of this was going on, a senior Likud official was anonymously quoted as warning the Blue and White party, “This may be the last Wednesday of the 23rd Knesset. This isn’t working out. I had no high expectations from the outset, but I never thought it would be anything like this. It’s impossible to get any work done. Will we go to elections on Monday? That would be terrible, but continuing like this, given the current circumstances seems to me even worse.”

The “senior Likud official” was apparently no other than Netanyahu himself. Thus, given all of Netanyahu’s frenzied activities, the political system is now wondering whether he is already in the midst of a new election campaign or whether these are just more spurious exercises intended to apply pressure on governing partner Blue and White to allow him to amend the coalition agreement.

Most importantly, this frenzy could be part of an attempt by Netanyahu to gain some footing in the appointment of the state attorney. Attorney General Avichai Mandelblit is currently also the acting state attorney because Justice Minister Avi Nissenkorn, elected as part of the Blue and White coalition, has not appointed someone yet. Netanyahu, who believes that Mandelblit is going after him, wants to weaken the attorney general as much as he can. This becomes all the more urgent as Netanyahu’s trial advances, and the question of whether he can continue serving as prime minister is raised.

For weeks now, Netanyahu has been creating the false impression that he considers the approval of the state budget critical. He even picked a fight with the Blue and White party over it. But now, the moment of truth is approaching. Likud and Blue and White negotiating teams are working hard to bridge the differences between them. Still, while of all this is going on, Netanyahu seems to be piling more and more obstacles. Blue and White is ready to compromise on the budget, but even that is not enough for Netanyahu. He seems to enjoy taunting them, abusing them, and in the end, weakening them.

Netanyahu also recently took the opportunity to humiliate Blue and White leaders yet again. He went behind the backs of Defense Minister Benny Gantz and Foreign Minister Gabi Ashkenazi, both of them former Israel Defense Forces chiefs of staff, by signing the agreement normalizing relations with the United Arab Emirates last week. The reason he was so stealthy about it, or so he explained, was that he was worried that “people on the outside” would leak the news to the press.

While Gantz had no choice but to swallow his pride and ignore the insult, it certainly did nothing to improve his relationship with Netanyahu, a relationship that has already reached a crisis point. Netanyahu has identified Gantz’s weaknesses. The prime minister can see Gantz's desperate position in polls, so Netanyahu keeps putting on the pressure, in the hope that the Blue and White leader will fold.

We are now five days before the Knesset’s Aug. 25 deadline on the budget — a vote considered legally as a vote of confidence in the government. In other words, we are just five days before Israelis will learn if there will be a new round of elections, or if the unity government will survive the latest crisis round. Nevertheless, no one but Netanyahu has any idea what will happen at midnight Aug. 24. All that is certain is that failure to pass the budget will result in the Knesset being dissolved automatically, and another round of elections being held in November.

It would seem inconceivable that no one in the Likud or Blue and White knows what Netanyahu really wants. He may juggle with the agenda, but in the end, he is in control. Blue and White is helpless when dealing with Netanyahu’s maneuvers and manipulations, his fickleness and his ability to pick himself up again and again. The UAE agreement demonstrated that precisely. As victor, Netanyahu showed no magnanimity, giving no credit to his partners, when he announced his latest achievement at a press conference.

While this was going on, Gantz was in Tel Hashomer hospital, recuperating from serious back surgery. When he woke up, he was forced to contend with an incessant stream of political events. On Aug. 18, he returned to work, filled with a fighting spirit. He attacked Netanyahu head-on, saying that the prime minister was motivated by outside considerations. The problem was that Gantz was subjected to an incessant series of attacks from the Likud in return.

Ever since he returned to work, Gantz has participated in a series of consultations and brainstorming sessions. They are all part of a futile effort to figure out whether Netanyahu has finally decided whether he will move the elections up or not.

The night of Aug. 19, Gantz held a Zoom meeting with the members of his Knesset faction. He himself was in a hotel in Kfar Maccabiah, still recuperating from his surgery. Still, Gantz used the opportunity to warn his colleagues of impending elections, saying, “These are critical days. What Netanyahu is doing could lead to horrible elections for the State of Israel. Nothing necessitates a new round of elections. Blue and White is committed to stability. … Unlike others, we do not play poker at the expense of the citizens of Israel.”

The next morning, Blue and White continued to lash out at Netanyahu. Party ministers were instructed to give interviews to the various media outlets, at which they were to accuse Netanyahu of dragging the country to a new election for personal reasons. Still, this didn’t really change anything. The political state of affairs remains murky. One thing is certain. This will not be the first time that Netanyahu alone will decide when the next election is held. With more demonstrations expected this weekend outside the prime minister’s residence, Netanyahu and his family members are expected to make a decision.

Based on his behavior over the past few weeks, it seems clear that he is preparing for elections. He is exacerbating crises, he goes out to the street to connect with the public and he attends Knesset sessions to deliver campaign speeches. He has even sketched out the battle lines, and picked the rival who fits him. He relays to the public that the duel will involve himself and Yesh Atid leader Yair Lapid. Netanyahu knows that the public does not consider Lapid to be fit to take over as premier.

Netanyahu certainly knew for quite a long time that an agreement with the UAE was forthcoming. As far as he was concerned, it was an electoral tiebreaker. The people love it. It is a historic agreement that shows how vast the differences really are between him and any other candidate. Then there is the simple fact that Netanyahu suffers every minute he is forced to spend in a unity government, not least because it erodes his public support. As a result, the temptation to call a new election is huge.