Prime Minister Benjamin Netanyahu seems to be banking on getting all of Israel vaccinated against COVID-19 by March 23. 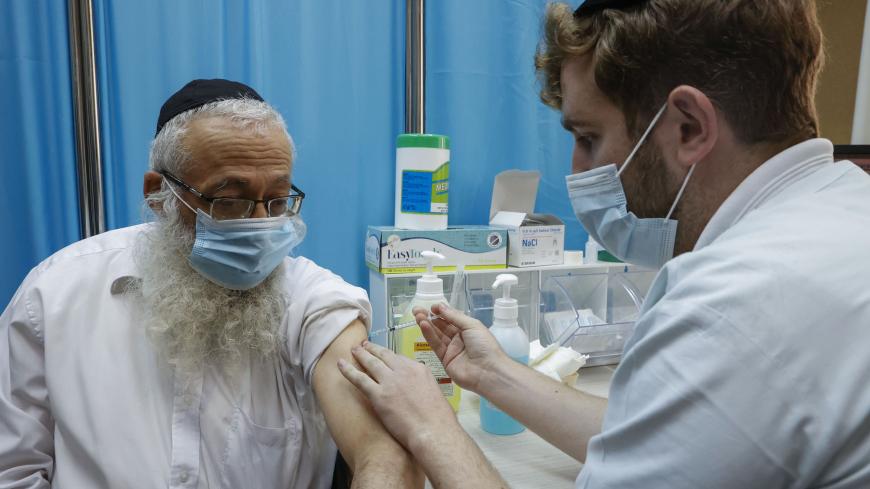 “Netanyahu understood months ago that the development of a vaccine was the only way that the world and Israel could resolve the COVID-19 crisis — and the only way he could win the elections and survive," a high-level political source who asked to remain anonymous told Al-Monitor. "He was so focused on this that it was scary: he did not let up, did not stop, was really obsessive. He didn’t even blink vis-à-vis the ultra-Orthodox camp about inoculating people on the Sabbath — and no one turned it into a crisis.”

The source, who was privy to Prime Minister Benjamin Netanyahu’s actions and behind-the-scenes lobbying, compared the prime minister to an “attack dog.” Netanyahu personally supervised the financial negotiations with the pharmaceutical companies, including late-night phone calls to the CEOs of the Pfizer and Moderna companies and to the relevant Israeli health and finance officials, working to cut through red tape and allocate the necessary budgets.

In his words, “Netanyahu viewed the vaccinations as the be-all and end-all. It was the most important thing to him. Anyone who knows him knows that Netanyahu always has something of high priority on his mind and everything else has to wait. And the vaccination issue is a good example. He studied everything about the disease, on a real scientific level, and stubbornly held on to those vaccinations like a drowning man — even when those around him did not believe that it would be possible to develop a vaccine in such a short time period.”

On Dec. 19, Netanyahu became the first Israeli citizen to be vaccinated against COVID-19 on camera, kicking off Israel’s admirable vaccination drive. As of this morning, Jan. 5, 1,370,000 Israelis had been inoculated — a record-setting number. And of course, Netanyahu gets the the credit.

There is a lot of talk today in Israel about national pride, national mobilization and hope. The public health clinics, which are handling most of the logistics, have operated like commando units, pushing themselves to the edge to reach Netanyahu's goals, numbers that had seemed unreal less than three weeks ago. The press — not only in Israel, but the entire world — has reported breathlessly on Israel’s vaccination project.

Israel is leading the world’s vaccination efforts by a significant margin. Meanwhile, the vaccination projects in Europe and the United States are limping along. On Tuesday morning, the Moderna company announced that its first vaccine package will reach Israel at the end of January, speeding up the schedule with millions of vaccines in addition to the Pfizer doses.

It comes as no surprise that the battle over credit has started. Netanyahu’s opponents tried to play down his role in the vaccination drive and argue that Israel’s HMOs are the real winners, but Netanyahu has already begun campaigning on the achievement.

On Nov. 16, opposition leader Yair Lapid released a video accusing Netanyahu of “a great vaccination bluff,” arguing that the vaccinations would not get to Israel as soon as the prime minister claimed. “Mr. Netanyahu, I’d like you to answer just one question. Why are you not telling the truth about the vaccines? We are adults. We can handle it, even if the truth is unpleasant. … We understand it’s difficult to get them. There is no reason to lie. … Israelis will be waiting for the vaccines to arrive in January, but the vaccines won’t arrive.”

Lapid was wrong. The vaccines arrived in the middle of December and by the end of 2020, almost a million citizens were inoculated. The video has become a laughingstock that Lapid surely regrets, especially after Netanyahu himself posted it to mock on Facebook.

Netanyahu is busy posing for photo ops at the vaccination sites, including in the Arab sector, and regularly reports on the progress over social media.

This success holds tremendous political significance. If the vaccination drive continues until election day, March 23, millions of Israelis will have received their second and final inoculation. If all goes according to plan, the economy as well as the educational system should be well on the way to recovery. The light at the end of the tunnel will shine for Netanyahu in particular, as he faces very complex political challenges in these elections. His opponents have grown and more parties have turned against him, diminishing his ability assemble a government even if he heads the largest party.

In addition, it is still not clear to what extent the economic fallout from the pandemic will affect Israeli voting patterns. Netanyahu clearly hopes that the vaccinations will cheer up bitter Israelis and that the voters will see his vaccination drive as the cure to the economic crisis. He's conducting a single-issue campaign rather than directly attacking his opponents, portraying himself as global leader.

According to Netanyahu’s campaign program, he intends to embark on shuttle diplomacy toward the middle of February or beginning of March, when millions of Israelis will have been vaccinated. The prime minister will visit the Arab countries with whom Israel has signed agreements, including the United Emirates, Bahrain and Morocco.

According to a high-placed minister who spoke to Al-Monitor on condition of anonymity, “Netanyahu kept the vaccine card close to his chest. He kept it a secret from the high-ranking Blue and White people and from [Blue and White leader] Benny Gantz, so no one would spoil the surprise or take credit for the achievement.”

Will it be enough? According to our source, Netanyahu will find it very difficult to create a right-wing-ultra-Orthodox coalition. But without the vaccine card, it would have been impossible. According to the minister, “The vaccines really trump all the other cards in the deck. It is a fact; success can be proved by the numbers and by comparing ourselves to the rest of the world. It’s like winning a war, and Netanyahu will take all that to the public in his campaign.”