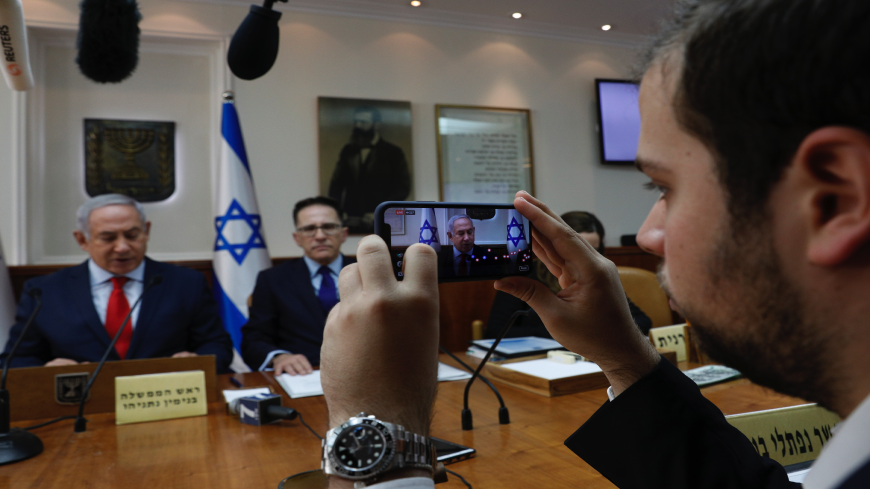 A media adviser of Israeli Prime Minister Benjamin Netanyahu makes a Facebook live broadcast as he opens the weekly Cabinet meeting at his Jerusalem office on Jan. 21, 2018. -

After Prime Minister Benjamin Netanyahu received his first of two COVID-19 Pfizer vaccines at Tel Hashomer Hospital, he took advantage of the location to film his first TikTok video. That was on Dec. 19, 2020, and Netanyahu — who bore the honorary degree of being the first person in Israel to be vaccinated — appeared feisty and spirited and said he felt great.

Just before the video was uploaded to TikTok, Netanyahu’s social media staff reported to the media that the prime minister had opened an account on the app. Since then, Netanyahu’s vaccine video got about 3 million hits, and he’s not stopping there. As of today, Netanyahu managed to upload another 11 upbeat videos, one minute for each (according to current limitations of the genre). It isn’t surprising that Netanyahu was the first Israeli politician who saw the potential in TikTok as a tool to serve him in the current election campaign.

Netanyahu is known for his worship of social networks ever since he revealed their tremendous power in the 2015 elections. Since then, he is racing on all the platforms and has already achieved digital superiority over all his competitors via his well-trained staff — and lots of funding.

Aside from Facebook and Twitter, Israel’s prime minister has over recent years also opened accounts on Telegram and Instagram. All in all, he has millions of followers despite the fact that in Israel, TikTok and other such genres are identified with kids and adolescent entertainment. Netanyahu’s activities in this sphere have surprised many people and also attracted a new public to his side.

Netanyahu does not stop at any means to accumulate political and media power, certainly when fateful elections loom in the near future. He has identified the potential that lies within TikTok, and it lies beyond his young followers there and their parents. All of his videos are shared on digital media and also on traditional channels, increasing the traffic. Despite his 71 years, Netanyahu’s figure on TikTok is very up-to-date; in his language, his nuances, his body language and his slang. He always seems to enjoy the opportunities to have fun, even in the midst of workdays that are crowded with important COVID-19 issues.

What can we find on Netanyahu’s TikTok? Practically everything.

The prime minister reports a warm telephone call he placed to the Moroccan king, then he makes an appeal to youths and children to read more. Netanyahu even shared “Bibi’s Diet” in a video he filmed after he received the second vaccine at Tel Hashomer Hospital. The story is: He went to the hospital’s cafeteria and stood in front of the selection of tasty pastries. Then he announced, “I am here, in the cafeteria of Sheba Hospital. I received my second round [of the vaccine], terrific. All of you out there, do the same. … But … one problem: There are ice creams here, and in the back, there’s a picture of bagels. I have lost a lot of weight now because I’m taking advantage of the lockdown to work out at home and lose a few kilos. So I’m encouraging you to take care of your health, too. Keep up social distancing, washing your hands and wearing masks. And the second thing, lose a little weight.”

Netanyahu then asked his followers on TikTok: “Write your responses to me here. What are you doing these days? I’ll tell you about 'Bibi’s diet,' and you’ll tell me about your diets.”

The person closest to Netanyahu these days is a young fellow less than 30 years old named Topaz Luk. Luk had served in the army with Netanyahu’s son Yair and was one of the architects behind the social media empire of the Israeli prime minister. In fact, Netanyahu doesn’t go anywhere without Luk closely behind him. Luk films and produces Netanyahu's videos and makes sure they are circulated properly. It was Luk who pushed for Netanyahu to open a TikTok account as part of the strategy to transform Netanyahu into a more humane, accessible human being.

Digital strategist Itay Tsamir explained to Al-Monitor why Netanyahu rushed to join the app. He claims that at the moment TikTok is the best tool with which to go viral. It is the easiest place to create organic engagement with people. The politicians, he says, have identified this trend and are flocking to open TikTok accounts. Netanyahu recruited 6,000 followers in TikTok within 24 hours, and today he’s almost at 200,000. Tsamir also notes the influence of TikTok on the elections in the United States as having catalyzed the growth of TikTok in Israeli politics.

Netanyahu’s entrance to the TikTok world was the sign for additional Israeli politicians to storm the Chinese app, whose growth rate has been the highest in the entire world over the past year.

Among the salient personalities involved is opposition chairman Yair Lapid who launched his account at the beginning of January 2021 in the “Challenge of the Fingers” video. Since then, he has produced 13 additional ones; all contain much self-directed humor and light-hearted messages. Additional politicians who are active in the app are Yamina Chairman Naftali Bennett, Defense Minister Benny Gantz, Likud Minister of Settlement Affairs Tzachi Hanegbi (who filmed a video in a boxing ring), former Minister Yizhar Shai from Blue and White, and many other Knesset members and ministers.

According to an internet report issued by Israel’s internet providers who examined the influence of COVID-19 on the network traffic, a 60% rise in Israeli use of TikTok has been registered from after the first wave of lockdown easements last summer.

According to Nir Hirshman, media adviser and CEO of Hirshman Communications, it was the COVID-19 epidemic that encouraged the politicians to join TikTok. “The COVID-19 era created a situation in which most of the population became addicted to TikTok because of the closures and lockdowns. People are really tight behind their screens these days,” he says. “The politicians understand that they must reach even this audience.’’ Hirshman says most if not all of the party members running in the March elections joined TikTok because they need to woo their voters, and they understand that now everyone’s on TikTok. It’s a question of popularity.”

The election campaign is currently warming up. That, the data just mentioned and the fact that Israel is waging its first “virtual” campaign under lockdown and without election rallies and mass tours serve to explain the TikTok phenomenon. Israeli politicians, who are known for their chutzpah and informality, predict that TikTok will be the hottest thing ever on Election Day in March 2021.