Prime Minister Benjamin Netanyahu can no longer organize huge party-convention gatherings, which is why he is constantly on the road, meeting citizens personally and campaigning for their support. 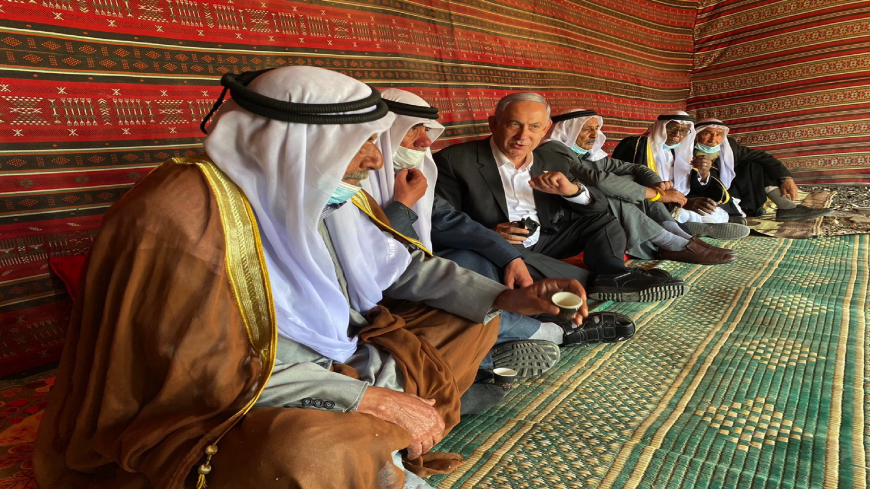 Prime Minister Benjamin Netanyahu’s motorcade arrived in the coastal town of Bat Yam just south of Tel Aviv in the unseasonably hot afternoon hours of March 10. Netanyahu bounded out of the car surrounded by bodyguards, engaging passersby in conversation. Children asked for selfies with him, and a bride and groom on the way to their nuptials were treated to an unusual photo-op with  for their wedding album.

“Back to life, back to weddings,” beamed Netanyahu, clapping hands to congratulate the couple. The event was documented and posted on social media in real time, as was his entire walk along the promenade of the town considered a bastion of Likud support.

Undeterred by the heavy security cordon and coronavirus distancing, the hundreds of people he met on his walk showered Netanyahu with the adulation and good wishes that his opponents often ridicule. “Bibi, we love you,” “You’re our soul,” “What a hunk,” “Bibi King of Israel,” “Bibi, baby,” “Bibi, I’m crazy about you,” (this from an elderly woman) they cried out. For the many Israelis fed up with Netanyahu, such scenes are emblematic of the endemic corruption generated by a quasi-dictatorial regime and buoyed by a public oblivious to its insidious rot.

Netanyahu is well aware of such sentiment, harnessing it to his advantage. He makes each follower feel special, arouses in each identification with his sense of persecution by a sated elite, and generates anger at the injustice to which he is allegedly being subjected. He is essentially telling them that those who deride him are actually contemptuous of his voters, too, and that their vote is worth just as much as the next person’s at the ballot box.

That is why, despite the chaos generated by such encounters and the misery of his harried bodyguards almost overwhelmed by the complex mission of protecting him from adoring fans, Netanyahu does not rush such tours or forego any occasion to meet and greet, even with a group of 12-year-olds not eligible to vote.

His endless mingling, all posted on social media, makes for dizzying viewing. He submits to photos with anyone who asks, talks to everyone, asks their names, wants to know whether they have been vaccinated against the coronavirus, and asks each one personally to vote for him and convince their families to do the same.

Even when he takes time to rest on a barstool at a beachfront restaurant, Netanyahu is working. A young man walks up to him, holding out his cellphone, and Netanyahu obligingly records a message for the family WhatsApp group. “Dear Biton family, vote Likud. Do not stay home,” he urges, determined to personally mobilize each voter.

The entire event along the Bat Yam promenade, lasting almost 15 minutes, was broadcast on Netanyahu’s Facebook page, with select clips sent to Likud voters. From there he was driven a short distance to a convention hall where he held an election rally, also aired on social media. Netanyahu then got into his car where he launched a live Facebook event, speaking with supporters, munching on snacks and occasionally humming the Likud party jingle.

From Bat Yam, Netanyahu was driven to other towns in central Israel — Rehovot, Or Yehuda, Ramle — all considered Likud strongholds. He took time at each stop to update his Facebook feed with short messages.

The day before, March 9, his road trip took him up north, where he met with voters and held rallies in several towns and villages. The message at each stop was the same: We can get on with our lives by virtue of the vaccines I brought to Israel, and I am the only one who can generate economic recovery and prosperity. If you do not vote, Yair Lapid will become prime minister. Lapid is chair of the centrist Yesh Atid party, which is polling second to the Likud in recent weeks.

At 71, Netanyahu seems as hungry as ever for power and more determined to win than any of his rivals. His ambitious campaign is focused on two constituencies: potential Likud voters and the Arab public. Netanyahu is not expected to go on the stump in traditional strongholds of the political left in Israel’s major cities. There is no point wasting energy there.

With half the voting public seeking to unseat him and even despising him, Netanyahu is targeting voters who abandoned his Likud in favor of the other right-wing parties challenging him, such as New Hope and Yamina, and trying to mobilize a new constituency: Arab Israelis.

Netanyahu is scouring Arab towns and villages for support, meeting with residents just as he is doing with Likud supporters. On March 7, he toured Bedouin villages in the south, sat on a carpet in a Bedouin hospitality tent and drank coffee with his hosts.

Once again, everything was documented and immediately disseminated on social networks. In fact, Netanyahu has become a one-person broadcasting station. He is the main content editor and in recent days has logged at least six hours of Facebook time. He talks about dieting, tells jokes, talks to his aides. He is as accessible as can be. And it seems to be working, judging by the way his campaign is resonating. Even voters who quit the Likud are starting to return home when they see how Netanyahu is willing to fight for their support.

Netanyahu has many campaigns on his resume, but this one is different and more intriguing. He is politically vulnerable given the COVID-19 repercussions; he has more rivals than ever on the political right who, along with his other opponents, are determined to oust him. Although the coronavirus crisis is his Achilles heel, Netanyahu is projecting success — the massive vaccination campaign has his name on it, and the results are undisputable — a dramatic decline in morbidity, with the spread of the virus stemmed, hospital wards emptying and, as of March 7, restaurants and event venues filling up.

Shedding the traumas of three lockdowns, Israelis are embracing a return to routine and Netanyahu is trying to translate the uplifted mood into votes and Knesset seats.

He has his work cut out for him. On the one hand, he is stable in the polls with the Likud even gaining slightly and still by far the largest party. On the other hand, none of the polls foresee Netanyahu and his allies garnering sufficient votes for the 61-seat Knesset majority he needs to govern. He is totally dependent on Yamina party Chair Naftali Bennett, without the 11-12 seats at which he is polling Netanyahu cannot form a government.

Opponents claim Netanyahu is stressed out and hysterical, realizing the jig is up. The facts do not bear out this portrayal. Netanyahu never calls it quits. He is focused and precise in the messages he delivers and the target audience he picks. Not a single selfie of the hundreds in which he featured this week was a waste of time. He is truly trying to reach each and every potential voter in person, on the phone, on social media and in taped messages. He is carrying the Likud’s entire campaign on his back.