The former prime minister Benjamin Netanyahu is crisscrossing the country, popping up at streets, sea-side promenades and camping sites in Likud-friendly environments. 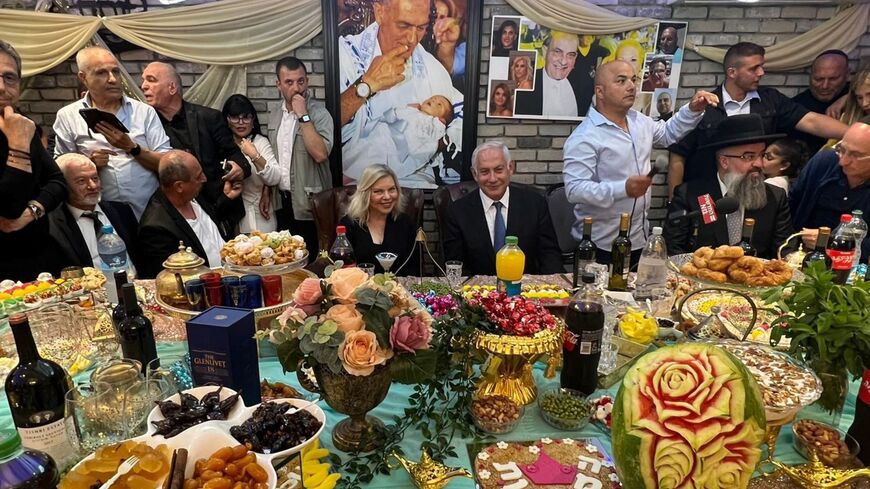 Former prime Minister Benjamin Netanyahu and his wife, Sara, visit the Mimouna festival in Or Akiva on April 23 2022. - Office of Likud spokesperson

“I bless you every day. You are our Messiah!”

The elderly woman was visibly excited as she spoke to the leader of the Opposition, former Prime Minister Benjamin Netanyahu. It happened April 20, on the esplanade in Tiberias, during the weeklong Passover holiday. After the long coronavirus lockdown, Israelis are finally returning to the northern vacation town, packing the hotels and camping sites along the shores of the Sea of Galilee.

On that particular day, several residents of Tiberias were delighted to run into Netanyahu and his wife, Sara, out for a stroll, surrounded by police and security guards. For half an hour, the couple were greeted with calls of support and encouragement: “Bibi, you are number one! Come back!” the crowd shouted, referring to the former prime minister by his nickname. “Bibi, we love you!” “Here’s Bibi! Bibi is here!” “Bibi, King of Israel!”

Netanyahu climbed up on a platform and waved, holding a megaphone that an aide had the foresight to bring along. “Hello to the people of Tiberias!” he called, like a rock star. “It’s no coincidence that we’re here. We love Tiberias, so we visit Tiberias all the time, especially during the Passover holiday. And we love you!”

The makeshift crowd cheered and chanted, “Come back! Come back!” A wave of cell phones filled the air. Two minutes later, he and his wife continued their stroll. Now, however, it was being broadcast live on Netanyahu’s Facebook page.

The buzz gained momentum across social media. Thousands watched the broadcast, while many others posted their own pictures of Netanyahu’ s visit.

Just one day earlier, Netanyahu paid a similar visit to Ashdod, a vacation town on the Mediterranean coast and another Likud bastion.

The Netanyahus walked among the crowd, letting themselves be photographed. They reveled in the calls of support and love. This visit was broadcast live on Netanyahu’s Facebook page too. Based on what they were wearing, the crowd was more religious than the one in Tiberias, yet here too, they pulled out the cell phones to capture the moment. One woman broke down in tears at the opportunity to meet the man she admired so much.

At first glance, it would seem that Netanyahu was out for a leisurely stroll with his wife on the Passover holiday. In fact, it was part of a well-organized campaign, planned down to the last detail.

Netanyahu believes that a new round of elections is right around the corner, perhaps even in a matter of months — at least, that is what he is telling people around him. So he has started to campaign informally, rather than in organized events, because he wants to create the sense that he still has a personal relationship with potential voters.

In the past, when Netanyahu has taken to the street, he has had political advisers and party activists at his side. More recently, he has decided to avoid this. He wants to create an image of himself as being loved by the people, so he is campaigning in cities closely affiliated with the Likud. The people he runs into are largely folksy, traditional, and religious. The scenes are authentic.

All in all, it is a very sophisticated move. Netanyahu is taking advantage of new media to tell the story of how popular he is to as many people as possible. Live broadcasts of his “spontaneous” events received tens of thousands of views. Every individual who captures him on camera and spreads those photos and videos online increases Netanyahu’s strength.

Netanyahu seems to have been hard at work all throughout the holiday. He spent the last weekend in Tel Aviv, a city considered more hostile to him. Many of its residents formed the hard core of demonstrators who opposed him when he was prime minister. Yet, here too he took to the esplanade for his morning walk. On Saturday morning [23 April], he even went down to the beach with his younger son Avner to have  coffee with former Likud minister Ofir Akunis, who lives in the city.

Netanyahu spent that evening with his wife at the traditional Mimouna celebration of the Moroccan Jewish community to mark the end of Passover. The event was hosted by one of his supporters in Or Akiva, another town considered to be a Likud bastion, with a predominantly traditional, Mizrahi population. It is Netanyahu’s home court. “I walk down the street and meet people," he told his audience. "They are so full of hope. All of a sudden, they have a big grin on their face. They hope and long for us to put Israel back on the right track, the safe track, the track that will ensure security and prosperity for all of Israel’s citizens. With God’s help – and with your help too, we will achieve this very soon.”

Netanyahu made a point of avoiding any direct references to Prime Minister Naftali Bennett. His strategy seems to be that as long as the current government’s popularity is deteriorating (as it is, according to the polls), he will be its mirror image. All he has to do is be present and come into direct contact with as many people as possible.

The coalition crisis, the wave of terrorist attacks in Israel over the last few weeks, and escalating tensions along the Gaza border are excellent material for Netanyahu. After all, his popularity tends to grow, when the security situation is tense. Even his personal legal situation, which normally weighs down on him, seems to be working to his advantage now. His trial is expected to last for years. It certainly won’t be over before the next election. In practical terms, this means that there is nothing to stop Netanyahu from running for prime minister.

After failing to obtain a decisive victory in the last four elections, Netanyahu concluded that he must take full advantage of every possible source of voters. In the last election, for instance, which brought an end to his time in term as prime minister, Netanyahu lost many voters in traditional Likud bastions. The two seats that he lost eventually determined his fate. The street campaign in Likud towns is intended to rectify this. It is a pep rally of sorts right in the heart of his electoral base.