With polls giving him 59-60 Knesset seats, opposition leader Benjamin Netanyahu is busily campaigning in neighborhoods where his party has lost influence. 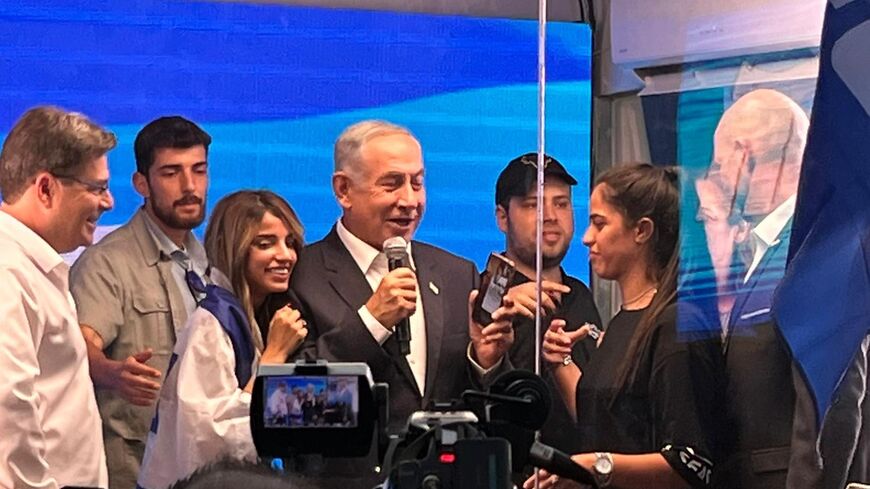 With less than two months left until Israel goes to the polls, most polls indicate that opposition leader Benjamin Netanyahu's right-ultra-Orthodox bloc would win 59-60 Knesset seats, just short of the majority needed to form a new government.

Only a seat or two stand between Netanyahu and the prime minister’s office. Should he fail to reach this goal, a member of his own camp could demand he be replaced.

The remaining leaders of the current government are quite clear in rejecting a coalition with Netanyahu, including current Prime Minister Yair Lapid, Defense Minister Benny Gantz and Finance Minister Avigdor Liberman.

Netanyahu is concentrating on Likud voters who quit the party over his bribery trial or are likely to stay home on election day out of apathy or disgust with Israeli politics.

Netanyahu collected the voter data from Likud bastions in the last election to identify the areas where his support has declined. The Likud has a vast pool of data on former registered Likud supporters who did not register again in the last election.

Netanyahu instructed his campaign managers to contact each of them to explain why their vote this time is critical to returning the right to power.

Netanyahu recently produced and distributed a video of himself visiting the home of one of the families that apparently did not vote in the last election.

The video shows Netanyahu saying in the stairwell of a residential building in Tel Aviv, “Today, we are launching our door-to-door campaign. I will be joining thousands of volunteers visiting Likud and other right-wing voters to tell them, ‘This year we’re not staying at home.’” Netanyahu then climbs the stairs and knocks on a door to be greeted by a young couple. Everything is scripted, of course.

Netanyahu is planning rallies and gatherings for traditional bastions of the Likud all across the country, the towns and neighborhoods where the Likud is still the biggest party but lost support in the last election.

Netanyahu arrived in southern Tel Aviv yesterday in an armored truck and spoke to the crowd from behind bulletproof glass. It was a bizarre sight that came under intense criticism. The Likud explained that the measure came at the request of the Shin Bet, which oversees Netanyahu’s security detail, as Netanyahu has been the target of numerous threats.

The neighborhoods along the route were chosen to reach many of the party’s traditional supporters that stayed home in the March 2021 election.

Netanyahu and several Likud seniors brought select supporters onto the truck for Netanyahu to address them personally in front of the cameras. “Our victory depends on you and you alone,” said Netanyahu. “I want each and every one of you to find someone who supports the Likud but didn’t vote in the last election and bring him to the voting booth. That’s the only way we will win.”

The campaign has been met with mixed reactions, and not just from Netanyahu’s rivals, who mocked him for appearing in a glass cage. Even within the Likud there were some who said off the record that it was a serious mistake.

One former minister told Al-Monitor on condition of anonymity, “Putting Netanyahu behind a glass wall only does more damage. He looks disengaged with the people, as if he is above them. There is no personal touch. He is a little like an alien. His great strength is his direct, unmediated encounters with the public. He is great at that. I hope they reconsider what they are doing.”

According to a member of Netanyahu’s inner circle who spoke with Al-Monitor on condition of anonymity, the former prime minister is undisturbed. “Netanyahu is completely focused. He told us that nothing really interests him apart from bringing tens of thousands of thousands of voters back home to the Likud. This is the only way we will win the election. It’s not the signs or slogans but us going door to door.”

Netanyahu has reportedly expressed concern over the recent poll numbers, which show that the Likud has lost two seats to Bezalel Smotrich and Itamar Ben-Gvir’s far-right Religious Zionism party.

Netanyahu doesn’t want them to be too strong, because if he does win 61 seats and forms a coalition with them, they will have be able to demand top jobs and large budgets. Accordingly, Netanyahu will focus on taking seats from them in the days leading up to the election, just as he did in the last election with supporters from Yamina.