Netanyahu fighting over every single vote

The announcement of Prime Minister Benjamin Netanyahu about appointing former Jerusalem Mayor Nir Barkat as finance minister in a future government was part of his relentless efforts to conquer each and every vote ahead of the March 2 elections. 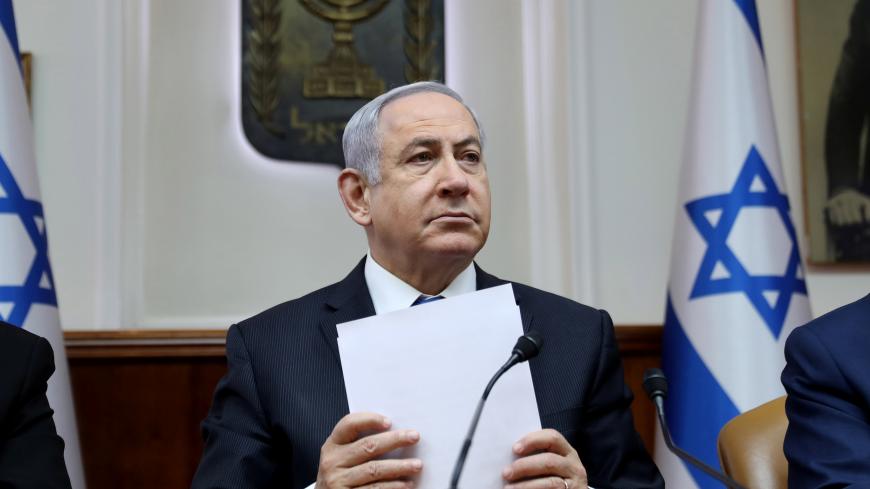 Knesset member Nir Barkat of the Likud, Prime Minister Benjamin Netanyahu’s designated pick for the country’s next finance minister, is not among his current loyalists. On the contrary, in October 2019 Barkat published an autobiography titled “Running Long Distance.” He held a festive and expensive book launch event in the surprising presence of the prime minister’s wife, Sara Netanyahu, who came to congratulate him. However, immediately following the launch, a cover story ran in the weekend magazine of the Yedioth Ahronoth daily headlined “I will be Prime Minister after the Netanyahu Era.” Barkat, the wealthiest member of Israel’s Knesset, whose fortune is estimated at 500 million Israeli shekels ($146 million), boasted in the piece of his success as a high-tech entrepreneur and of Jerusalem’s flowering during his 10-year mayoral term from 2008-2018. At the time, Netanyahu’s standing appeared somewhat shaky after he failed twice to form a government, and the Likud was gripped by unrest. A leadership challenge was in the air. Sources close to the Prime Minister’s Residence revealed at the time that the Netanyahus did not like the headline, to put it mildly. Sara Netanyahu felt cheated after having attended a party for the man who views himself as her husband’s successor, and relations cooled. Barkat was added to Balfour Street’s list of suspects.

So what happened two weeks before the March 2 elections to make the prime minister upgrade and embrace that same Barkat? Why did Netanyahu pick him to be his next finance minister, passing over stalwart party loyalists such as ministers Yariv Levin and Miri Regev? It turns out Netanyahu discovered, inter alia through polls, that Barkat enjoys a certain public appeal. For moderate, middle- and high-class right-wing voters who advocate a liberal economy, he projects sophistication. Contrary to claims by some in the Likud, including by Barkat associates, his support is not worth two or three Knesset seats for the party. His potential support is smaller and barely equals even half a seat apparently (some 33,000 votes are needed to obtain a Knesset seat), if at all. So why did Netanyahu do it? The move is part of Netanyahu’s current campaign strategy of picking up even a few thousand potential voters. Netanyahu believes that if he can get out the vote of some of the 250,000 Likud voters whom, he claims, stayed home in the September 2019 elections, he will achieve a 61-seat majority for his right-wing, ultra-Orthodox bloc.

Netanyahu is going out of his way to bring voters of Ethiopian origin back into the Likud’s fold. He “stole” Ethiopian-born Knesset member Gadi Yevarkan from the opposition Blue and White party and promised an immediate airlift to Israel of 400 Ethiopians who have close relatives in Israel, a hasty promise that turned out to be problematic, cynical and not truly feasible. At the same time, he is courting cab drivers, to which end he has postponed the planned fare reform that incurred their ire. He drops by Likud bastions throughout the country every night and holds rallies like a religious preacher. Netanyahu even films emotional personal appeals to Likud supporters who do not want to vote, urging them to help keep him in power. That is why Barkat’s chances of being appointed finance minister after the elections, if Netanyahu forms the next government, are slim. Netanyahu has a long repertory of broken appointment promises.

On Feb. 16, Netanyahu and Barkat visited the Tel Aviv Stock Exchange. The designated finance minister presented his plans for boosting Israel’s free economy and bringing down the cost of living. It was a hollow performance with no basis in reality, and it is highly doubtful that anyone believes anything will come of it. It was a gobbledygook of populist campaign promises — including subsidized housing for first-time homeowners, a pledge to lower import duties and food prices and to build four new hospitals. Netanyahu stood there as though he was not the man who has been running the country for the past decade.

However, until it becomes clear that none of this will pan out, Netanyahu is running a campaign that portrays the Likud and Barkat as the great hope of the Israeli economy. At the same time, the Likud is portraying opposition Knesset member Avi Nissenkorn of the Blue and White party, a former labor union leader, as plotting to take Israel back to the era of powerful trade unions and a backward economy.

Netanyahu is known for his ability to focus intensely on his battle du jour and only on that at any given time. Since he has convinced himself that a 61-seat majority is at arm’s reach and all he has to do to achieve the target is pick up voters here and there, Netanyahu is wholly focused on the task. “If he could have, he would have personally gone door-to-door to get out the vote,” a despairing Likud minister told Al-Monitor on condition of anonymity. This skepticism notwithstanding, Netanyahu has managed to infect quite a few ministers and lawmakers with his belief in his victory. He tells them he has polls from the past weekend indicating the bloc of right-wing, ultra-Orthodox parties has picked up additional support and is currently worth 58 seats. Just three more and "we are there," he tells them. Many of them accompanying him to packed election rallies, where he shows up like a rock star, are swept up in the belief that the 61-seat target is within reach. Meanwhile, polls commissioned by various media outlets point to a deep stalemate between the two blocs. There is no significant voter movement between them, and neither side has the required majority to form the country’s next government.

These are seemingly strange elections. On the one hand, it appears that nothing of any significance is happening. Nonetheless, Netanyahu flew to Washington and attended a festive White House unveiling of the deal of the century depicted as a historic occasion. Flying home from Moscow last month, he brought with him Naama Issachar, the young Israeli woman jailed in Russia on drug charges after obtaining her release courtesy of President Vladimir Putin. And as of Jan. 28, he is the first sitting Israeli prime minister to be indicted. However, none of these momentous events and developments has tilted the political map.

Israelis are sick and tired of elections, having endured two this past year, with a third looming — there is no telling how that might impact voter turnout. The agenda is not political, with headlines dominated instead by the spread of COVID-19 (the coronavirus) and preparations for possible cases in Israel. Netanyahu can find solace in his apparent success in blocking the negative effects of the corruption indictment against him. His standing within the Likud is stable, and no cracks have emerged in his solid right-wing, ultra-Orthodox bloc. Therefore, for now, the most reasonable scenario appears to herald a fourth round of elections later this year.