After pulling every trick in the book, Netanyahu left with little

Prime Minister Benjamin Netanyahu has just two weeks left to shift the public's attention away from the date set for his trial to other issues, such as the coronavirus. 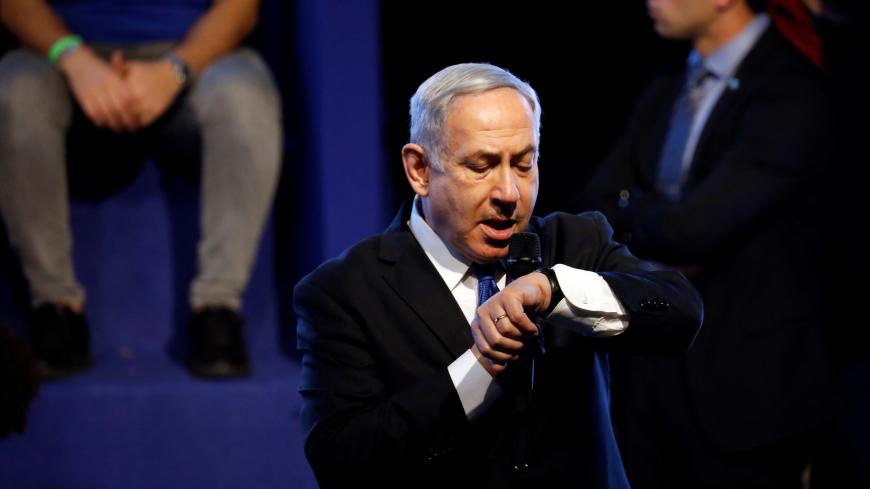 Prime Minister Benjamin Netanyahu granted on Feb. 18 an interview to the Israeli Arabic-language Panet website, for the first time in the current election campaign. Apparently, Netanyahu is even going after the potential Arab vote, assessing that this constituency could provide him with the crucial Knesset seat he needs to make his dream of a 61-seat majority come true and leave him in power.

On that same day, the Justice Ministry announced the date set for Netanyahu’s corruption trial — March 17, two weeks and a day after the March 2 elections. Publication of the date and of the identities of the three judges who will preside over the tribunal brought home the fact that the prime minister accused of bribery was really going on trial, and this was no longer just a vague future calendar event. Blue and White leader Benny Gantz was quick to issue a statement, describing the “Netanyahu trial” as a sad day for the State of Israel. Netanyahu was quick to respond, challenging Gantz to a televised debate. Gantz tweeted back that Netanyahu’s challenge was nothing but a spin designed to sideline his looming trial, an insight which was obviously true. From now until election day, Netanyahu will use every trick in the book to set an alternative agenda to his trial.

For Blue and White, the trial date announcement was a welcome campaign gift that immediately restored Netanyahu’s bribery indictment to the top of the agenda. This had been Blue and White’s key message until recently, but it was silenced after Netanyahu withdrew his request for Knesset immunity against prosecution in late January and took control of the agenda with the “deal of the century” — a historic White House extravaganza alongside US President Donald Trump and the ensuing argument over whether the United States had given Israel the go-ahead to annex the West Bank or parts of it. On his way home from Washington, Netanyahu stopped off in Moscow, posed for a photo with Russian President Vladimir Putin and brought back on his plane Naama Issachar, a young Israeli woman jailed on drug charges whom Putin freed under pressure from Netanyahu. A few days later, Netanyahu was off again, this time to Uganda for a historic meeting Feb. 4 with the chief of Sudan’s Sovereignty Council, Abdel Fattah al-Burhan, ahead of the possible normalization of ties with this formerly hostile Muslim state.

Blue and White found it difficult to launch an effective campaign in the face of Netanyahu’s relentless diplomatic onslaught. Polls indicated that Netanyahu’s frenetic diplomacy was offsetting his dramatic criminal drama, but did not affect the persistent deadlock between his right-wing, ultra-Orthodox bloc and the opposition.

Now that he has pulled the major rabbits out of his hat, from Trump to Putin, Netanyahu probably has no more major surprises up his sleeve. All he can do now is keep generating news, gimmicks and attention grabs in a bid to pick up votes wherever he thinks there is potential. That explains his decision to devote precious campaign time to Arabic-language media.

Ostensibly, Netanyahu should have been the Israeli politician most reviled by Israel’s Arab minority in view of his incessant incitement against its elected representatives. Still, Netanyahu’s associates are claiming that there are Israeli Arabs who think Netanyahu has been good to them. Therefore, potentially, some of them could actually vote for him. Hence the decision to offer Panet that interview.

Panet is a powerful outlet, influential and highly popular among Israeli Arabs and Arab readers, in general. It operates out of modest offices in the central Israeli Arab town of Taibeh and is run by its founder Bassam Jaber, formerly a journalist with the Arabic-language service of the now-defunct Voice of Israel Radio. The Panet site is considered somewhat sympathetic to the right-wing government. Thus, Netanyahu knew that Jaber, who conducted the interview, would provide him with a welcoming platform.

Netanyahu took the opportunity of the interview to declare that the idea proposed in the Trump plan of moving Israel’s border lines so that some of its Arab citizens would become citizens of a future Palestinian state was a nonstarter. “We need to erase the idea of transfer. There is no transfer. There won’t be a transfer. No one — Jewish or Arab — will be uprooted from his home,” Netanyahu said.

Netanyahu also said Israel was conducting many clandestine contacts with several Arab states. “The more I talk about it, the less it will yield. … I cannot tell you how many times I have visited Arab states, for example Oman and in Uganda I met with the President of Sudan. These were public meetings, but believe me there are many more. … [Relations] are growing closer.” Netanyahu said he believes Israeli Arabs will soon be able to fly directly to Saudi Arabia for the hajj.

Reports that Netanyahu gave the interview to the Israeli Arab website and the few headlines that emerged from it made it into key Israeli Hebrew-language outlets. But to what extent will this help Netanyahu attract Arab votes? Prospects of such an outcome appear slim, but meanwhile he has succeeded in making news that has nothing to do with his looming trial. Netanyahu is also trying to appear in the media in the context of the coronavirus epidemic, an issue that interests Israelis these days far more than the lethargic election campaign. Almost every news broadcast leads with the developments on the Diamond Princess cruise ship anchored off Japan, among whose passengers were 15 Israelis. Netanyahu dropped by the Sheba Medical Center on Feb. 19 and was shown the isolation facility prepared to house those who might be infected by the virus. Here, too, the same logic was at play: Anything that can be done to divert attention from his legal woes will be done.

At the same time, Netanyahu is rushing around the country, addressing elaborate, packed election rallies. He is accompanied by senior Likud ministers and dozens of youths brought to each rally to provide an energetic backdrop of the younger generation for the 70-year-old leader. At a rally in the suburban Tel Aviv town of Bat Yam for Russian-speaking Israelis, he showed up with a gallery of respected ministers, among them two senior Russian-speaking Likud figures: Knesset Speaker Yuli Edelstein and Minister Ze’ev Elkin. The crowd was given headsets for the simultaneous translation of Netanyahu’s speech. Netanyahu believes this is the way to bring home a certain number of voters who crossed the lines to vote for his Russian-speaking nemesis, former Defense Minister Avigdor Liberman. Over the past few days, Netanyahu has stopped direct attacks on his former ally Liberman, and is now focused on bringing voters “back home.”

Blue and White is conducting a similar campaign. There, too, the search is on for every possible vote. Gantz held quite a few rallies for Russian-speaking voters over the past week, gave interviews to all the Russian-language media outlets and explained that unless the immigrants from the former Soviet Union vote for his party, the political logjam will persist. After all, these are the elections of small numbers.