For Israeli Arabs, last-minute efforts by Prime Minister Benjamin Netanyahu to visit their towns and villages just before the March 2 elections are simply a pointless insult. 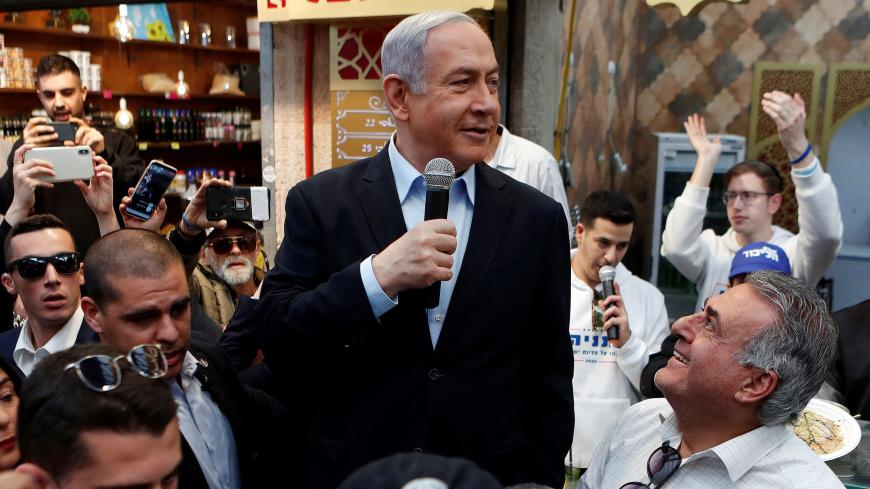 Campaigning will draw to a close this weekend, and no more poll results will be published (by law). Still, party activists will continue their efforts on the ground until the voting is over. Israel has probably never seen an election as intense as this one, with people fighting over every single vote. The most recent polls show that the roughly equal division of the electorate into two rival blocs will repeat itself in the March 2 election. In other words, the election will not be decided by which of the candidates has a bigger bloc behind him. As far as the Likud and the Blue and White party go, they are locked in a race over which will be the biggest party in the Knesset. Meanwhile, it is obvious to everyone that voter turnout in the Arab population will ultimately determine the value of each seat and the division of seats in the house.

The Arab Joint List claims that it can win as many as 16 seats this time around. They also believe that this will help keep Benjamin Netanyahu out of the prime minister’s office. Netanyahu seems to realize this, too, so he has avoided the mistake he made in the last two elections, when he failed to form a government. In this election he did not incite Jewish Israelis against Arab voters. His proposed “Camera Law” (to install cameras in polling stations) on the eve of the September 2019 election was supposedly intended to prevent voter fraud in Arab towns and villages. What actually happened as a result was that it spurred Arab citizens to take advantage of their right to vote. While they may not have voted en masse, voting rates were noticeably higher among the Arab public than they were in previous elections.

In the current election, Netanyahu limited his incitement campaign to target only Knesset members from the Joint List — because he can’t go without any incitement or intimidation at all against the Arabs. At the same time, he took great care not to incite against Arab voters. He even tried to convince them that he would be good also for the Arabs, because he plans to repeal the “Kaminitz Law,” which was approved by the Knesset in 2017.

On Feb. 25, the Knesset’s Finance Committee decided to freeze implementation of the controversial Kaminitz Law until further notice. The law, which is named for Deputy Attorney General Erez Kaminitz, calls for stiffer penalties for building violations. The Israeli Arab population suffers from acute housing shortage, mainly because the government had neglected for years their communities and pushed forward no development programs or urban planning. This desperate situation has generated many building violations in Israeli Arab towns and villages. Thus, the law seems to target the Arab population. Former Justice Minister Ayelet Shaked admitted as much in an interview in 2019, when she said, “The goal was to enforce laws against illegal construction in the non-Jewish sector.”

In talks between the Joint List and the Blue and White party after the September 2019 election, the Joint List presented a list of conditions that needed to be met if they were to recommend Blue and White leader Benny Gantz to form the next government. One of these demands was the repeal of this law, because it discriminates against Arabs. Netanyahu is well aware that the law continues to upset Arab voters, so one week before voting begins, the Kaminitz Law is on its way to repeal.

It is doubtful that Netanyahu really believes that he can win three seats from the Arab sector, as he claimed in a Feb. 19 interview with the Arabic-language website PANET. Rather, it looks like he is trying to spread apathy among Arab voters, so that they don’t rush to vote for the Joint List — because they don’t have to. The repeal of the Kaminitz Law would certainly help him get the message across that Arab voters should be treated with leniency — at least like West Bank settlers — and that he wants to help them.

Knesset member Avi Dichter (Likud), former director of the Shin Bet, came to Netanyahu’s aid Feb. 26 by trying to relay that same message. In an Arabic-language video that Dichter posted — and which Netanyahu shared on Twitter — he tried to drive a wedge between Knesset members for the Joint List and their electorate. In it, Dichter argues that these Arab Knesset members care only about themselves and their seats. They support the Palestinian Authority, but do nothing on behalf of their voters. In contrast, claimed Dichter, the Likud under Netanyahu invested 15 billion Israeli shekels ($4.3 billion) in Arab society over the last decade.

Not only does Dichter belittle the intelligence of Arab voters in his video, he also ignores the fact that virtually all Israeli Arabs speak fluent Hebrew. They really don’t need him to speak to them in Arabic, especially not in an accent that they can all identify — the accent Dichter picked up in the Arabic-language school of the Shin Bet.

As if that was not enough, Netanyahu also decided to go campaigning in Arab towns and villages. At a Feb. 26 rally planned for him in the town of Tamra, he learned (if he didn’t actually know it already) that years of incitement against the Arab population cannot be erased with a single visit. About 80 people showed up for the rally, while dozens more held Palestinian flags as they demonstrated against him outside. They were furious about his visit. Back in the hall, Netanyahu repeated Dichter’s remarks: “What has the Joint List really done for you?” he asked. “They constantly talk about [Palestinian President] Mahmoud Abbas and a Palestinian state, but what have they actually done for you? Walla ishi! [an Arab phrase meaning "nothing"]. Equality isn’t just words. Equality is expressed in action, and before that, resources.” Of course, he promised to provide them with plenty of those vital resources just after the election.

“Netanyahu is lying. He is trying to ingratiate himself by making empty promises,” Knesset member Yousef Jabareen (Hadash) told Al-Monitor. He claims that Netanyahu is scared because he knows that the stronger the Joint List becomes, the less likely he will be able to form a new government. “That's why he is switching strategies,” Jabareen said. “He realizes that his incitement boomeranged back at him, and prodded [Arab] residents to go vote against him.”

As aforementioned, the Joint List is convinced that with the right ground game, organization and effective efforts to persuade voters, they can win as many as 16 seats. Its members are confident that Netanyahu will not be able to convince a single Arab voter to cast his ballot for him. While a 16-seat target does not seem realistic, one thing is certain: The only person Netanyahu can blame for the strength of the Joint List — beside himself — is his former partner and now his bitter rival Yisrael Beitenu leader Avigdor Liberman. Liberman worked hard to get the electoral threshold raised in 2014, and he did it for the sole purpose of keeping the small Arab parties out of the Knesset. He never imagined that the Arab parties would join forces despite the vast ideological differences between them. He never would have guessed that they would become the third-largest party in the Knesset, holding the balance of power. Who knew that they would prevent Netanyahu from forming a right-wing government, forcing him, instead, to ingratiate himself with their Arab electorate? The days of the Messiah have finally arrived!