Arab parties stand to gain from political chaos in Israel

The Arab Joint List seeks to boost its number of seats in the Israeli Knesset in the March election by increasing turnout in the Arab community, with the ultimate goal of dealing a fatal blow to Prime Minister Benjamin Netanyahu, preventing him from forming a government. 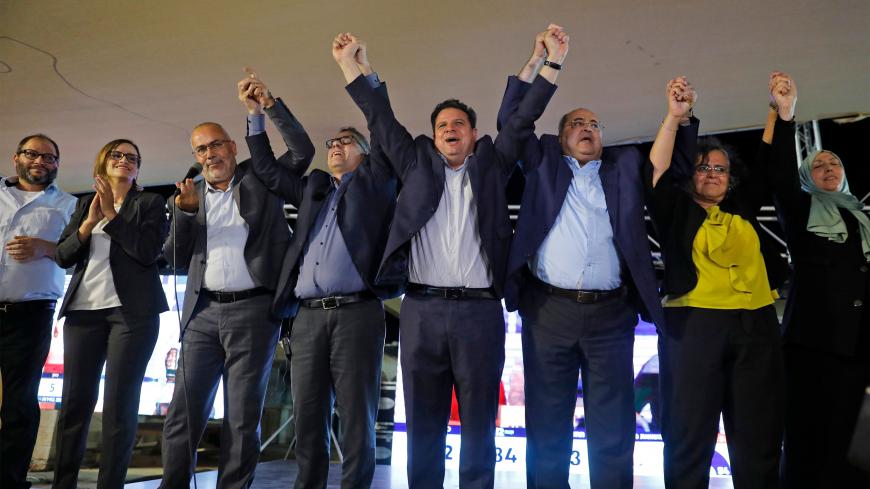 Members of the Joint List alliance raise their hands as the first exit polls are announced on television, Nazareth, Israel, Sept. 17, 2019. - AHMAD GHARABLI/AFP via Getty Images

RAMALLAH, West Bank — Israel has set March 2 for its next legislative election, which will be its third in less than a year. The Knesset, Israel's parliament, passed a bill Dec. 12 to dissolve itself, though it retains authority until a new election is held.

Israel had held an election in April 2019, but Prime Minister Benjamin Netanyahu was unable to gain a consensus to form his government, which prompted the Knesset to dissolve itself and head for a second election, on Sept. 17, 2019. The Blue and White party led by Benny Gantz, and Netanyahu's Likud party, obtained almost the same number of seats in the September election and also failed to form a government.

Meanwhile, Arab parties seem to be benefiting the most from the government formation crisis in Israel. The parties were divided in the April 2019 election and ran on two separate lists. In the September election, however, they fielded the united Joint List, winning 13 seats and becoming the third-largest force in the Knesset. In the election slated for March 2, 2020, the Joint List hopes to grab at least two more seats.

Netanyahu seeks to remain in office, though he was indicted last month on charges of bribery, breach of trust and fraud.

Knesset member Osama al-Saadi of the Arab Movement for Renewal (Taal) told Al-Monitor, “Holding a third election reflects the depth of the political crisis in Israel because of Netanyahu, who is seeking to spare himself imprisonment. … To escape prosecution, Netanyahu eyes the immunity granted to the premiership by securing the votes of 61 Knesset members.”

Netanyahu will not succeed in forming the next government, according to Saadi. “The Joint List wants to deal him the final blow and end his political life by getting more influence in the next Knesset and winning more than 15 seats. He has always been the first to incite against Arabs,” he said.

In the September election, the Joint List earned its 13 Knesset seats with half a million votes. Turnout among the Arab community reached 60%. The list’s campaign was based on toppling Netanyahu.

The Joint List was originally formed in 2015 by four parties: the National Democratic Alliance (Balad), the Democratic Front for Peace and Equality (Hadash), Taal and the United Arab List. It is betting on a number of factors to raise its share of Knesset seats.

“Our strongest card is that we will run the elections unified," Saadi said. "This will boost the public's confidence in us. There is a public desire to deliver a knockout blow to Netanyahu in response to his constant incitement against us."

Praising the Joint List’s achievements, he said, “We have addressed several sensitive issues for the Arab community in Israel, such as the spread of violent crimes and killings, and the increase of house demolitions in Arab towns.”

He added, “If we succeed in raising the turnout among Arabs to 75%, we will get 17 to 18 seats in the Knesset. This will keep Netanyahu away from power. The Joint List will turn into a key player in the political map of Israel. Our realistic goal is to get 15 or 16 seats; this requires 600,000 votes for the list, up 100,000 votes from the previous elections.”

The Joint List is forming teams to draw lessons from previous elections, develop an action plan and draft an electoral program supported by the masses designed to reach every village, town and city.

“We must communicate with all the Arab masses to persuade them and encourage them to vote in the elections,” he said. “This is how we can achieve several goals, most notably ousting Netanyahu, becoming an influential force in the Knesset, and working on resolving the Arab community's thorny issues, such as house demolitions, violence, crimes and poverty.”

An online poll conducted Dec. 15 by Israeli Broadcasting Corporation showed the Joint List is likely to keep its 13 seats in the next election. The poll indicates that the Likud party and its rival, the Blue and White party, will fail to form a governing coalition on their own. Among center-to-left respondents, 54% said Gantz should have formed a government with the Joint List in September to avoid more elections.

Knesset member Aida Touma-Sliman told Al-Monitor, “The public is more and more pleased with the performance of the Joint List. People felt our ability to influence the political scene in Israel. We believe that the public will give us more support in the upcoming elections. We will win the electoral battle and take down Netanyahu’s pro-settlement right-wing coalition.”

She indicated that the Joint List campaign will highlight its strengths, including addressing violence and crime in the Arab community and obtaining a decision by the Knesset before its dissolution to freeze the so-called Kaminitz Law on the demolition of Arab homes.

“The Joint List will set up an intensive work strategy that focuses on raising turnout among groups that had a low turnout in the previous elections, such as youth and women, as well as in some geographical areas, such as the Negev region,” she said.

The Joint List sought to topple Netanyahu after the September election. It recommended Sept. 22 that Israeli President Reuven Rivlin appoint Gantz to form a government. If the Joint List earns 15 or more seats in the upcoming elections, it will play a crucial role in preventing Netanyahu from forming the Israeli government.