Prime Minister Benjamin Netanyahu has adopted a new strategy for the Arab public: cynically rebranding himself as "Abu Yair." 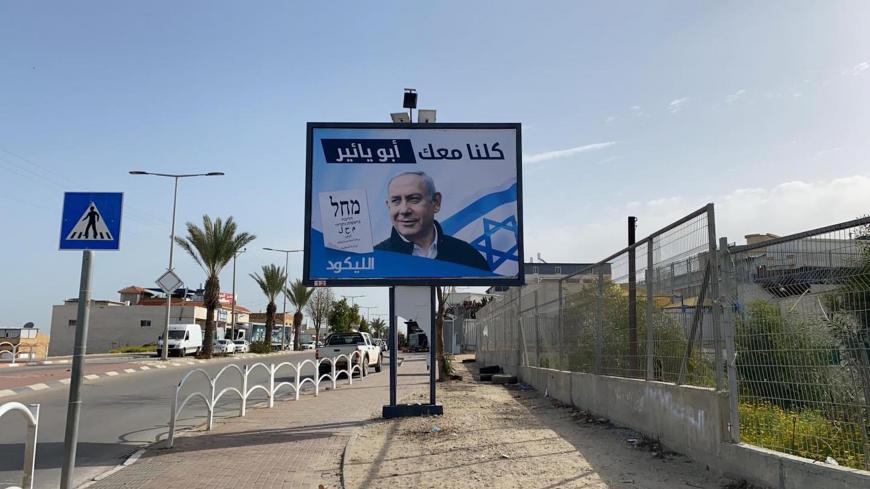 A campaign billboard reading in Arabic "We are all with you, Abu Yair" is seen in this photo shared by Prime Minister Benjamin Netanyahu's Arabic-language Facebook page March 10. - Facebook/NetanyahuAr

Any foreigner arriving in Israel before the upcoming March 23 election and spending time in the country’s Arab towns and villages would be stunned by all the love being showered on the local residents by a candidate known as Abu Yair. They might think that he's running with one of the Arab parties, but Hebrew letters spelling out “MaHaL” on the campaign posters mean the Likud party, as he is none other than Prime Minister Benjamin Netanyahu! (Abu Yair, of course, means, “father of Yair,” a reference to Netanyahu’s eldest son.)

“We’re all with you, Abu Yair!” blare the Arabic-language signs plastered in towns like Rahat and Shfaram. Cars covered with the slogan have been making the rounds in Arab towns and villages. The is a new Arabic-language Facebook page, created in early February, and an Arabic-language jingle (sung by a Jewish artist, for anyone wondering). There are also frequent meetings with Arab leaders and incessant visits to Arab towns and villages by Netanyahu and his retinue as they pitch what they present as a new candidate to Arab voters.

The second difference is there has been a drastic change in the way some Jewish parties treat Arab citizens. If the relationship between the Jewish parties and Israel’s Arab citizens was once characterized as distant, in this election Arabs are the most sought-after electorate by non-Arab parties, even Netanyahu himself.

Netanyahu and his party have adopted a new strategy in dealing with the Arab public, rebranding Netanyahu and turning a page on his relationship with the country’s Arab citizens. They hope that Arab voters will forget the old Netanyahu, who frequently incited against them and did everything he could to delegitimize them and boot them out of the political game. He had even said of the Knesset, “Arabs are not part of the equation.”

Will the Arab public connect with Netanyahu's new image and forget about everything he did in the past, now that he is trying to win their votes?

During his previous terms in office, Netanyahu made “right-wing” synonymous with hatred of Arabs to unite his base around him. Now that he sees how the tactic has boomeranged and led to higher voting rates in the Arab public, he is trying a different approach.

Researcher and feminist activist Manal Shalabi told Al-Monitor, “What began as a gimmick when Arabs on social networking platforms started calling Netanyahu ‘Abu Yair’ suddenly turned into a successful election campaign for Netanyahu in the Arab public. He is trying to draw closer to the Arab community while attempting to get Arab voters to forget everything he did in the past, including the demolition of homes, the nationality law and more. He is an intelligent man who is trying to distract Arab voters, but it may not work as well as he hopes. We already see him starting to drop in the polls among the Arab sector. Until recently, it gave him two seats, but now polls show Arabs giving him only 1.5 seats.”

Shalabi pointed out that not only did Netanyahu push for the discriminatory nationality law, he also promoted the law allowing cameras in polling stations for the purpose of suppressing the vote in Arab towns and villages and the Kaminitz law laying out fines for illegal building. His own government admitted that it targeted the Arab population and only later discovered that it affected Jews too. He took steps to advance the muezzin law against the call for prayer in mosques and the acceptance committee law, intended to keep Arab citizens out of Jewish villages, and many other pieces of discriminatory legislation. How could someone who promoted all that now be trying win Arab votes, she asked.

Zeinab Samania, a fellow at the Mandel Foundation for Leadership, told Al-Monitor about the dissonance in the Abu Yair moniker. “On one hand, it is intended to reflect a sense of legitimacy, identification, readiness to help and acceptability for Netanyahu within Arab society. On the other hand, it is disingenuous and inappropriate. The title speaks to the ‘simple folk,’ with the goal of gaining their support and winning their votes.”

Muhammad Zoabi, an LGBTQ activist, told Al-Monitor, “With Netanyahu, everything is personal. If he needs to cajole the Arab public just to remain in power, he will do that. So what if he passed the Kaminitz law and the nationality law? So what if he warned that Arabs were heading to the polls in droves?”

And what about Netanyahu's base, to whom "Arab" has long been a dog whistle to get them to close ranks around him to prevent his government from falling. How will these voters react to this new Netanyahu so cynically courting the Arabs he once attacked?