Netanyahu needs Likud 'soldiers' to fight for his survival 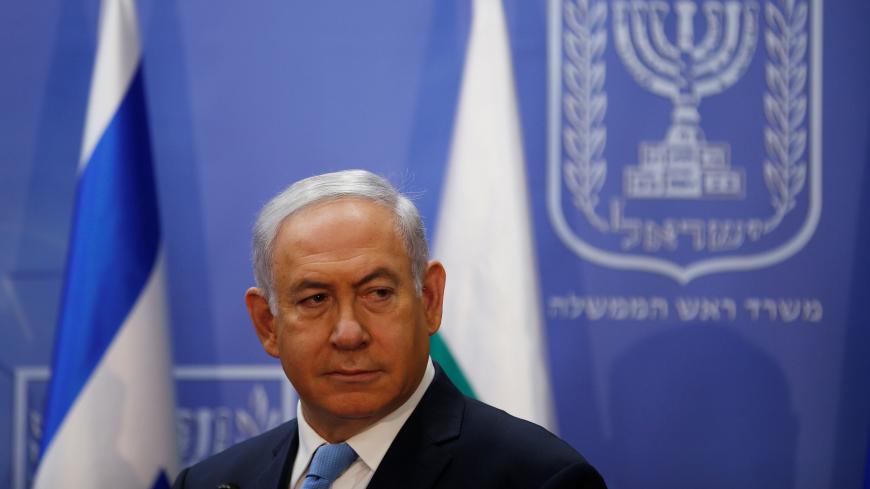 Since returning to power in 2009, Netanyahu has assiduously held two pre-holiday parties for Likud activists: ahead of Rosh Hashanah and before Passover. These events reflected the lively spirit typical of the Likud, regardless of Netanyahu’s fortunes. They would feature speeches by senior Likud ministers, by Knesset members with opposing views to those of the party chair, in keeping with the party’s inherently democratic nature.

At the 2009 Rosh Hashanah toast — held against the backdrop of the Obama administration's pressure on Israel to engage in talks with the Palestinians and Netanyahu’s milestone Bar-Ilan speech favoring a two-state solution — Knesset member Danny Danon warned the prime minister not to count on automatic party backing. “Likud members are not the prime minister’s rubber stamp. We will back him only if he adheres to Likud values and does not continue the construction freeze” in the West Bank settlements, said Danon — now Israel’s envoy to the United Nations. Education Minister Gideon Saar, on the other hand, urged his fellow Likud Knesset members to back Netanyahu because “the way to defend Jerusalem is to protect a Likud-led government.”

A year later at the 2010 pre-Rosh Hashanah toast, as Netanyahu prepared to leave for Washington to discuss reviving negotiations with the Palestinians, he pledged to his party members that any peace agreement would be based on effective security measures and Palestinian recognition of the Jewish state.

Netanyahu would sometimes devote his address at these festivities to the Iranian nuclear threat or the economic challenges facing Israel, and the Likud ministers were free to take the stage, too.

However, there is no mistaking the climate at the pre-Passover festivities of 2018. This is not the same party. Some of the popular ministers who graced these events in the past — like Saar, former Defense Minister Moshe Ya’alon and former Likud Minister Moshe Kahlon (current finance minister heading the Kulanu Party) — fell out with Netanyahu and left the party. In the Likud that Netanyahu built for himself, there is no room for other stars. This became increasingly obvious over time, climaxing after the 2015 elections, which gave Likud 30 Knesset seats out of 120. Netanyahu came away with the feeling that he himself had engineered this victory and he alone was responsible for the party’s success, and since then the eradication of the Likud’s top leadership has intensified.

The police investigations against Netanyahu have completed this process. The prime minister identified at an early stage what was to come and with the sophistication of a master politician mobilized the party, forging an inexorable link between his own fate and that of the Likud and the entire political right. His central message to them is that elements on the political left are trying to bring him down — and, in effect, them too.

The more the investigations accelerated, the more Netanyahu threw off all inhibitions, turning festive Likud events into personality cult rites, wiping out the remaining vestiges of the Likud in its heyday. This was reflected even in the way the invitation to the event was phrased and presented. Past invitations were signed by Netanyahu and the top Likud ministers. For the past two years, the invitations have borne the signatures of the prime minister and his wife.

Netanyahu saves his most outspoken rhetoric against the country’s law enforcement authorities for his Likud fans. He creates new events when the need arises, such as when he convened a support rally during the Hanukkah holiday in December to blast the police and declare that most of its recommendations to indict suspects “are thrown in the rubbish” by state prosecutors. The crowd gave him a warm embrace for his remark, of course.

The March 22 event was a culmination of the process that Netanyahu laboriously engineered.

The event was tailored to the needs of a leader engaged in a struggle against the political left and law enforcement agencies: starting with photos of Netanyahu hung in the hall, through the buses hired to bring as many participants as possible and down to the songs played. Regev Hod, a popular singer of Mediterranean-style music, adapted the lyrics of one of his biggest hits into a hymn of praise for Netanyahu. “Those who believe do not fear losing their faith, and we have the king of the world, who protects us,” he sang with fervor. The Likud of 2018 makes no pretense at refinement or modesty.

Knesset member David Amsalem, the chair of Netanyahu’s governing coalition who replaced Knesset member David Bitan — who is also under investigation — provided the warmup act before Netanyahu took the stage. Amsalem delivered an emotional speech in praise of Netanyahu. To his credit, Amsalem sounded entirely authentic when he identified with Netanyahu as a target of persecution. Amsalem told the crowd that he had recently flown abroad, prostrated himself on the tombs of righteous Jewish sages buried in Europe and asked “for the sake of your family and your wife that all our enemies and haters vanish.” This amazing rhetorical text reflects Netanyahu’s manifest success in ingraining his message of persecution in his followers. This sentiment also comes into play in the growing power of the Likud in all of the latest polls, despite the prime minister’s legal entanglement.

Amsalem dubbed Netanyahu a “strategic asset” for the State of Israel and claimed every world leader wants to stand in line to shake his hand, while in Israel he is received with “barrels of tar and feathers.”

Netanyahu devoted his speech to his struggle against the law enforcement community. The Iranian threat was relegated to the sidelines of his remarks. While he boasted of his strong ties with US President Donald Trump and of the flourishing economy, he did so only to intensify the audience’s sense of the persecution to which he was being subjected. As usual, his harangue targeted the police and claimed the left and media were out to get him. “They know that because we cannot be vanquished at the ballot box, we cannot be defeated by democratic means … then they exert relentless pressure, like thugs, against law enforcement elements in order to bring us down by other means,” he said.

There was also something new cleverly subsumed in his speech — flattery of his supporters in the country’s outlying, disadvantaged regions. Netanyahu spoke about his visit this week to the southern town of Dimona, saying, “This is the revolution we always dreamed about, turning the second Israel into the first," referring to the immigrant periphery towns that had been marginalized over the years. Netanyahu knows that this is where his legions are, the hard core of his voters. These are the troops that will fight his fight at the ballot box in the next elections, which will be the most dramatic battle of his life.