Likud cheers as Netanyahu returns, but polls tell another story

The Israeli prime minister's triumphant return from New York was topped off by the Likud's festive New Year celebration, leaving Benjamin Netanyahu feeling stronger than ever — at least within his own party. 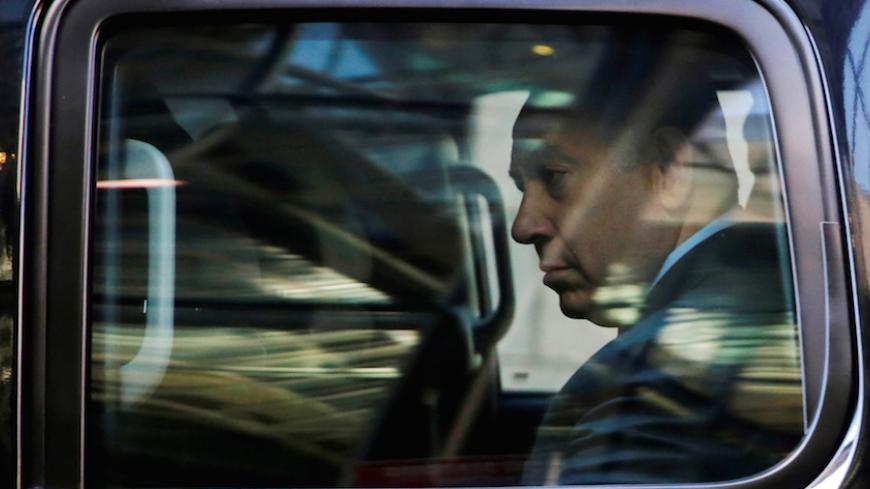 “Netanyahu is undoubtedly at one of his strongest points in the Likud,” a senior Likud minister told Al-Monitor on condition of anonymity the evening of Sept. 26, upon returning from the party’s annual toast for the Jewish New Year. Prime Minister Benjamin Netanyahu was the only speaker at the event, and the minister's statement is an accurate reflection of Netanyahu’s show of power that evening. He stood alone at the top of the party’s hierarchy. Even former Prime Minister Ariel Sharon didn’t enjoy such stature at the height of his own power in the Likud. He was, of course, challenged by none other than Netanyahu, who was busy with his large base of supporters doing all he could to replace Sharon.

Before Netanyahu’s plane had landed after his visit to the United States, over a thousand party activists were already waiting for him in the crowded hall in Kfar Maccabiah. They were understanding about having to wait for hours, a wait that grew even longer when Netanyahu finally arrived. Before they saw him enter the hall, he shut himself off in a private side room to freshen up, put on his makeup and go over his long speech. He corrected and improved it, erased and added to it, until he thought it was the perfect text. Only then did he step out to the crowd.

Unlike previous occasions, however, despite the long, exhausting wait and the late hour, these Likud supporters greeted Netanyahu and his wife, Sara, with one of the warmest, most heartfelt receptions in years. Maybe it was because he has managed to keep them in power in election after election for the past seven years. In their eyes, Netanyahu is in a league of his own.

Netanyahu’s entrance was met with exultant cheers from his Likud supporters. Cellphones were pulled out as if he were a rock star. Netanyahu strode in confidently, waving his hands and relishing the applause and every cheer of “Yay, Bibi!” Over the past few years, Netanyahu has managed to hone the feeling among the Likud that it is “us against the world,” the world being what he considers the dangerous left, with its willingness to make concessions, and the media that attacks him and his wife on what he believes to be a daily basis. In that sense, Netanyahu had come home.

The timing of the Likud’s New Year celebration certainly contributed to the good mood. It came right after Netanyahu returned to Israel, after the media had spent days reporting extensively on his address to the United Nations and his high-level meetings with a US president about to leave office and his potential successors. In every event, he was portrayed as the defender of Israel.

While the members of the Likud and its ministers were honored to have Netanyahu mention them by name, it was obvious that they were little more than a fancy backdrop for him. Right now, Netanyahu is the sole, unchallenged star of the party. He attained that status after eliminating his rivals, or at the very least hitting them so hard that they are paralyzed, as he did to popular Transportation Minister Yisrael Katz and former Defense Minister Moshe Ya’alon.

The event offered a glimpse into the inner workings of a party that has always seethed with internal struggles. The obvious conclusion is that Netanyahu is indeed in a good position within the Likud. He is a strong leader, and it doesn’t look like anyone is about to compete against him, despite former Interior Minister Gideon Saar’s hints. And it is doubtful that Saar will jump into the fray with Netanyahu’s leadership virtually unchallenged.

Even those pockets of resistance within the Likud that kept Netanyahu awake in the past melted away long ago. They once included former Likud Knesset member Moshe Feiglin (and his "Jewish leadership" movement) and other ideological groups on the right. Former Minister Danny Danon was once a political headache, at least internally, but Netanyahu sent him to the United Nations, and ever since, that front has been quiet.

Historically, there has never been a situation like this within the Likud. Netanyahu is not only alone at the top, but there is no strong option waiting on the sidelines to offer an alternative to his control of the Likud.

What likely kept the Israeli prime minister awake that night was a poll released by Channel 1 at the time of the festive event. It showed the chairman of Yesh Atid, Yair Lapid, growing stronger and his party emerging as the largest in the country. The poll indicated that Yesh Atid would win 25 seats, and the Likud 21, if the election were held today. What this means is that since the last election in 2015, the ruling party led by Netanyahu has lost almost a third of its strength.

More bad news for Netanyahu came from his rivals on the right: The poll gave the HaBayit HaYehudi chair, Education Minister Naftali Bennett, 13 seats and the Yisrael Beitenu chair, Defense Minister Avigdor Liberman, nine. Their growth in strength since the last election comes at the expense of Netanyahu and the Likud.

This is apparently also the reason Netanyahu’s speech Sept. 27 was a classic campaign speech, even though there are no elections on the horizon. It was a very long speech at 40 minutes, complete with a slideshow. It was unusual, as Netanyahu usually makes do with a brief holiday greeting at events of this kind. This time, however, Netanyahu wanted to “recall” his achievements: Israel is thriving, its international status is secure and most of all, the state is strong militarily and economically.

Netanyahu told his Likud supporters, “The rule is very simple: The weak do not survive. The strong and the smart survive. That is why our task is to make Israel very strong and very smart. If you are strong, you can do more than just defend yourself. You can also forge alliances.”

At the end of the event, the prime minister’s team tried to downplay the poll, which could have ruined the celebration for them. In briefings to the press, his people tried to emphasize that the poll was taken before the prime minister’s address to the UN, “with all that this means for the results,” one of his associates told Al-Monitor on condition of anonymity.

Even if that is the case, this is still a troubling trend for Netanyahu, who had been climbing in all the recent polls. What difference does it make for Netanyahu, who has no competitors in the Likud, if an alternative for the position of prime minister is emerging and if he is losing seats to Liberman and Bennett? It is a good thing for him that elections are not on the horizon.