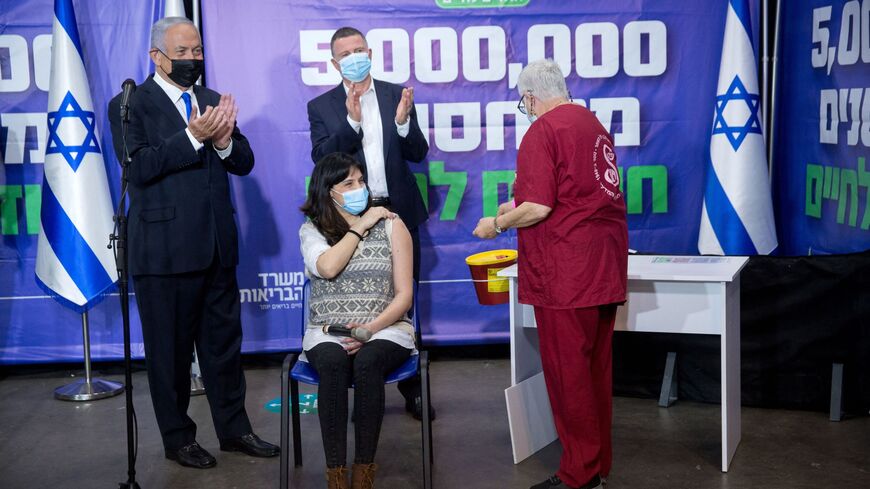 Israeli Prime Minister Benjamin Netanyahu (L) and Health Minister Yuli Edelstein (C) pose for a picture with an Israeli citizen who became the 5 millionth person to receive a first shot of the Covid-19 vaccine in Tel Aviv on March 8, 2021. - MIRIAM ALSTER/FLASH 90 POOL/AFP via Getty Images

His message was concise and focused. Looking directly into the camera and speaking in a calm and composed voice, former Health Minister Yuli Edelstein dropped a political bombshell on Oct. 11. Arguing that opposition head Benjamin Netanyahu cannot lead the Likud back to power, he decided to run for head of party.

With that statement, Edelstein became the first senior member of the Likud to openly challenge Netanyahu in a primary election. He is the first to do so since the party lost power in the March 2021 election.

After four election campaigns, the Likud may still be the largest party in the Knesset, but as long as it clings to its popular leader, it will remain an opposition party. In other words, Netanyahu may be able to win the party more seats than any other party, but that alone is not enough to bring the Likud back to power.

Edelstein has had gripes with Netanyahu for years. While these showed in the Oct. 11 exclusive interview with Channel 12 News, it felt like Edelstein had spent quite some time preparing for this moment. His remarks were directed at the party’s top leadership, but they also targeted its base. “As prime minister, Netanyahu marked many achievements. But the facts speak for themselves – four times [elections] and there still is no Likud-led government. Conclusions must be drawn. We need to switch gears,” Edelstein said. He added that if the Likud won’t engage in some serious soul-searching, it will remain in the opposition for years to come.

When asked how he plans to replace Netanyahu, when polls give the former prime minister 30 seats and more, Edelstein answered, “Let me remind you that there have been polls before. … Let’s remember the poll over the disengagement from Gaza [2005]. Not one person in the country gave us, the rebel faction, a chance, when confronting an omnipotent Ariel Sharon. The final results, however, were 60-40 in our favor. I say that the real choice for Likud party members and supporters will not be between me and Benjamin Netanyahu but between me and [Yesh Atid party chair] Yair Lapid. With Netanyahu, we failed to form a government on four separate occasions. How will we possibly succeed a fifth time?”

Edelstein has made no effort to hide his plans or his frustration with Netanyahu ever since the new government was formed. He kept a low media profile, but at the same time, Netanyahu and his supporters also heard that he was checking his options. What did surprise them was the timing of his announcement. Is this part of some larger move, involving partners from the Likud or maybe even within the coalition? Will other senior Likud officials announce that they are in the running too?  Could billionaire former Jerusalem mayor and Knesset member Nir Barakat join the fray? It is no secret that he wants to take over from Netanyahu one day.

As would be expected, these questions have left an air of uncertainty around Netanyahu and unrest among his supporters. Even after his four successive failures to form a government, Netanyahu remains remarkably popular compared to any other candidate, whether within the Likud or in other parties.

Nevertheless, the fact that a popular Likud official like Edelstein is challenging him so openly presents a problem for Netanyahu. Despite all the favorable polls, it is no longer possible to say that Netanyahu is the unchallenged leader of the Likud.

In that same interview, Edelstein also announced that he plans to demand a quick primary for the Likud party leadership. He then added that it won’t be necessary to hold another election for the Likud to return to power. As head of the Likud, he could form a new coalition. What he was really saying is that Netanyahu is the problem, and that he is the solution.

Netanyahu’s supporters within the Likud quickly announced that they will support him in the primaries despite Edelstein’s arguments. More telling, perhaps, was the silence of the other potential contenders: Barakat, former minister Israel Katz, and the former director of the Shin Bet, Knesset member Avi Dichter.

The reason is that they first wanted to assess the pushback from Edelstein’s risky move. In fact, just 24 hours after his announcement, Channel 12 released a new poll that was especially flattering for Netanyahu, but disturbing for Edelstein. As a result, it now seems that anyone who considered tossing their hat into the ring will wait, at least for the immediate future.

According to the poll, the Likud under Netanyahu would win 34 seats, while the Likud under Edelstein would crash, winning just 20 seats. But that’s not all. Likud voters were also asked whom they prefer to see as party leader. It was a knockout: 86% said Netanyahu, while just 6% supported Edelstein.

Even in this poll, Netanyahu lacks the 61 seats needed to form a government. On the other hand, it is also evidence of his stable base of support, even in a very fickle political environment. What the poll really shows is that Edelstein’s claims did not get much attention. Most Likud voters continue to believe that Netanyahu can be prime minister again.

Given these circumstances, Netanyahu would want to hold a primary as soon as possible. It is in his interest to win a certain victory while he is popular and to establish his position within the party. The problem is that he cannot decide on primaries on his own. The party apparatus, led by Knesset Member Haim Katz, have already vetoed that. What this indicates is that despite his overwhelming popularity among the public, Netanyahu’s official standing has been weakened since he left the Prime Minister’s Office.

But Netanyahu draws his strength and status from the public itself, not the party. Not only does he know this, but he also uses it to advance his own interests. Being head of the opposition helps him deal with the criminal proceedings underway against him. That is why, despite all the rumors, he is unlikely to call it quits once the budget is passed and the current government gains a modicum of stability.

Edelstein certainly realizes that Netanyahu is clinging to the party. He has no plans to go home, enter private business, or reach a plea deal in his trial. But that was and remains what senior Likud officials, including Netanyahu, had been hoping would eventually happen. They feel like hostages in the party, who were tossed into the opposition only because Netanyahu is unwilling to leave.

At age 63, Edelstein is signaling that he plans to break his party leader's bonds and to set out on an independent path, regardless of what it costs him. He is not deterred by a previous attempt by the current justice minister Gideon Saar, who ran against Netanyahu too, only to be defeated. Saar may have been forced to leave the Likud and give up his dream of being prime minister. But he now heads a small party, New Hope, where he is the only person in charge, he holds the post of justice minister, and he gets to see Netanyahu relegated to the opposition. Edelstein has already stated that even if he loses, he will remain in the Likud, but Saar said the same thing.

Taken on its own, Edelstein’s dramatic announcement poses no real threat to Netanyahu, but it is not good news for him either. Later this month, the former prime minister will turn 72. This will happen during a major political battle over his standing in the Likud.