All those Likud seniors who might have fiddled with the idea of challenging the leadership of Benjamin Netanyahu were pushed to unelectable spots on the party’s new Knesset list. 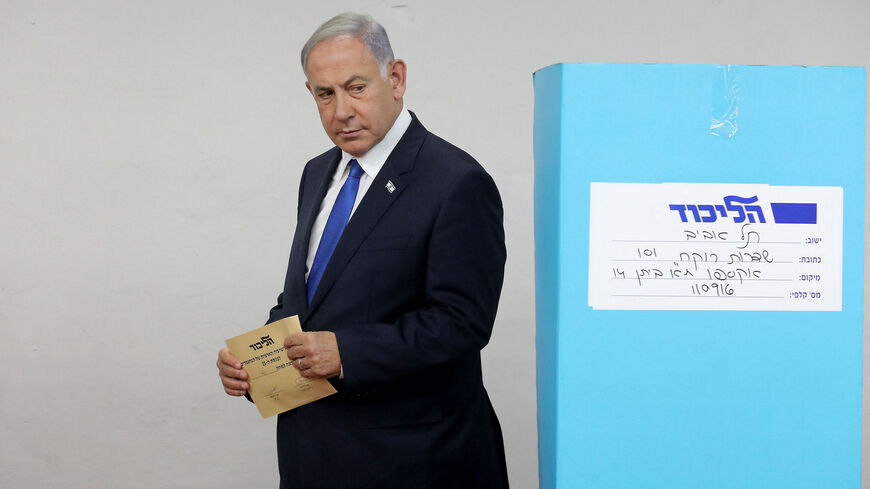 Israeli Likud party leader and former Prime Minister Benjamin Netanyahu votes in a primary to fill out the Knesset's slate, in Tel Aviv on Aug. 10, 2022. - GIL COHEN-MAGEN/AFP via Getty Images

Eighty-thousand Likud members arrived yesterday at polling booths to choose the party’s next Knesset list. Attendance was so big that organizers had to prolong voting time by two more hours.

Opposition leader Benjamin Netanyahu was contested by no one as party leader. Thus, his position was not up to vote. Still, the composition of the list became a “Battle of Titans” within the party, between Netanyahu’s loyalists and the associates of possible future contenders to Likud leadership.

That being said, final results published this afternoon proved unequivocally that Netanyahu remains the sole, unchallenged leader of the party, even after he lost the last election. More so, members of the Likud who tried to challenge Netanyahu’s grip on the party with the goal of succeeding him were all shunted to the back of the list.

These included former Minister Yisrael Katz, former Speaker of the Knesset Yuli Edelstein and former Jerusalem mayor Nir Barakat. They all ended up behind lesser-known Knesset members, including some backbenchers, in the final list.

Over the last few years, Netanyahu effectively eliminated politically anyone who challenged his absolute hegemony over the party. The list that was chosen last night proves that this process has been completed. There are no rival camps within the Likud and no individual who either challenges Netanyahu now or is prominent enough to run against him at a later date.

The last time that happened was when Justice Minister Gideon Saar challenged Netanyahu’s leadership in 2019. Netanyahu defeated him in the primaries and left him hobbling as damaged goods within the party. Eventually, Saar left the Likud and started his own New Hope party.

The top leadership of the Likud was taken over last night by a band of staunch Netanyahu loyalists, led by Likud party chairman Yariv Levin. He is joined by former ministers Eli Cohen, David Amsalem and Amir Ohana.

What they all have in common is a contrarian approach to the justice system, calls to limit its power and a commitment to its structural reform. This focus on the legal system is a direct consequence of Netanyahu’s ongoing trial, his claims that he was framed and that he is being persecuted by the police and the attorney general’s office.

This focus on the judiciary is also what led to the rise of a group of new figures in the Likud such as the former editor of the Yisrael Hayom newspaper Boaz Bismuth and attorney Tali Gottlieb. Her television appearances defending Netanyahu and attacking the legal system earned her a safe spot on the party’s Knesset list.

Social media also played a major role in this primary. The Likud is a party with many of the same characteristics as a closely knit tribe. Like some popular football clubs, it has branches and old-time members who know all the top brass so intimately that these officials even attend their family celebrations like weddings and bar mitzvahs. What distinguishes the current list is that candidates with a strong social media presence, especially on Twitter, also got moved to the top of the list.

The most prominent example of this is Knesset member Galit Distal Atbaryan, who is known for her provocative posts that cause a media storm on an almost daily basis. She managed to get herself elected to the list, even though she was an anonymous political figure as recently as two years ago. In fact, it was Netanyahu who first gave her a safe spot on the list before the last election in recognition of all her social activities on his behalf.

The Likud is now Israel’s largest party with about 140,000 registered members. According to recent polls, it is expected to win about 35 seats in the next Knesset. Still, its list is not devoid of problems for Netanyahu, at least outwardly. It lacks any moderate voices. The Likud of 2022 is a party formed in the image of a single man. Longtime Likud veterans, who were identified with the party for years, either found themselves shunted to the margins or quit the Likud entirely to form their own parties.

This morning, Netanyahu called for an “interview curfew” for senior officials and the Knesset list candidates to ensure that no one says anything untoward that could cause the party embarrassment. The problem is that his chance of maintaining such strict discipline throughout the three months leading up the Nov. 1 election is slim. Tali Gottlieb, for example, takes every opportunity to announce that once the Likud takes power, it will fire the attorney general.

Netanyahu’s rivals were quick to mock the party about its new list and the whole personality cult surrounding Netanyahu. “The results of the Likud primaries are appropriate for the eve of Tu B’Av. The more in love you are with Netanyahu, the [higher] up the list you are. Those less in love with him are pushed [off] the list and out of the Likud party,” tweeted Finance Minister Avigdor Liberman, head of the Yisrael Beitenu party.

“I am thinking of all the candidates who are eating their hearts out as they show their loyalty and flatter the leader,” posted Deputy Finance Minister Yair Golan, who is running for leader of the Meretz Party. He continued, “I think of all the candidates for whom this comes naturally. A party built around a personality cult is the farthest thing from a democratic party.”

But both of these tweets miss an important point. Despite their criticism, the Likud has a democratic mechanism through which it is run. They hold open primaries and candidates are chosen by secret ballot. In contrast, Liberman has been the head of a “one-man party” for the past two decades. He is not up for election within the party, and he personally selects the other members of his list.

Another of Netanyahu’s important achievements is that the party approved his request to ensure five safe spots on the list to candidates of his own choosing, and it did so with an absolute majority. The identities of two of these candidates are already known. They are Amichai Chikli and Idit Silman, both of whom defected from former Prime Minister Naftali Bennett’s Yamina party, joined the Likud in the opposition and helped Netanyahu topple the government.

Another important change is the inclusion of candidates of Mizrahi (Middle Eastern/North African) origin at the top of the list. More specifically, Amir Ohana and David Amsalem are among the top five candidates, while other candidates of Mizrahi origin can be found throughout the list. This is especially important because the Likud has had a strong hold on the Mizrahi community since its earliest days.

On the other hand, women do not figure prominently on the new list. There is only one woman — former minister Miri Regev — among the top 10 candidates.