Despite challenges from some Likud seniors, former Prime Minister Benjamin Netanyahu retains his status as party leader and the right's most popular politician. 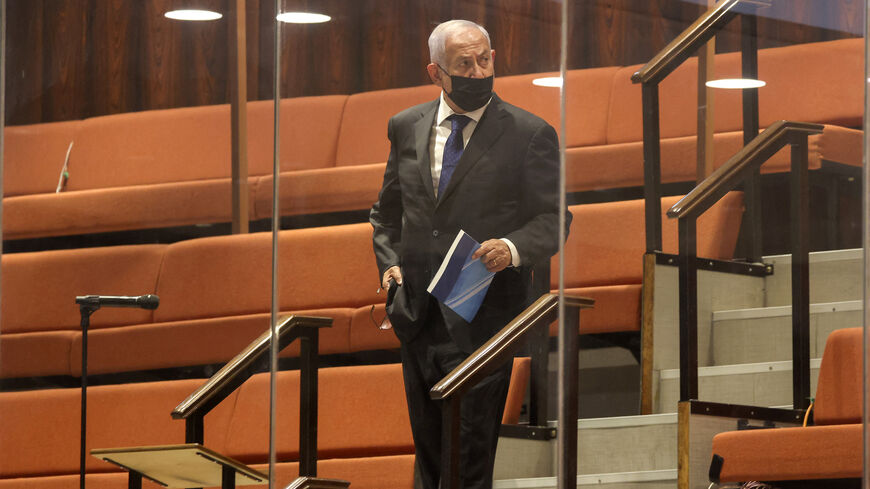 Former Israeli Prime Minister Benjamin Netanyahu stands in the guest bleachers of the Knesset plenum hall during a plenum session on the state budget on Sept. 2, 2021. - AHMAD GHARABLI/AFP via Getty Images

It has been three months since Benjamin Netanyahu left the prime minister’s office and his strength is being tested by his own party.

At first, the feeling has been that the new government, which took power with the narrowest possible margin, would soon fall. Netanyahu and his base. were convinced that the Likud’s defeat was an unfortunate blip, and that Netanyahu would soon return to the office that was stolen from him.

However, the new government has successfully managed to clear hurdles while being embraced by the media, making it easier to function. As a result, more voices in the Likud are beginning to wonder about the role Netanyahu played in their party’s downfall. This should certainly worry him.

Netanyahu was long considered unbeatable, at least within his own party, and he benefited from his iconic status. His ability to be reelected time after time and to keep the Likud in power for 12 consecutive years contributed to the sense that he is a once-in-a-lifetime leader.

It is the 130,000 members of the Likud who elect the party chairman and determine who will appear on its Knesset list. Netanyahu's popularity among the public grants him a kind of political immunity. Though some Knesset members and ministers loathe him personally, they are nonetheless forced to accept the will of the Likud party’s members. They know that if they attack Netanyahu, they will suffer in the primary vote to pick the Knesset list. Netanyahu’s strength lies in public support and not in any special fondness that the party’s leaders feel for him.

Netanyahu has a direct relationship with this party base. It did not abandon him even when he was got tangled up in criminal charges. The Netanyahu phenomenon is unusual in Israeli politics, to say the least.

However, more party officials are beginning to speak out openly against Netanyahu to the media. Some are questioning his judgment. Their main claim is that if Netanyahu would step aside, even if only temporarily, it would be possible to put together a government under some other Likud minister. They are convinced that the only reason they are not in power now is that so many parties have rejected Netanyahu personally and not the party that he leads.

After the March elections and the ensuing coalition talks, former minister Yisrael Katz revealed that in a private conversation with Netanyahu, he suggested that the Likud’s Central Committee select someone else to serve as prime minister and allow them to form a stable right-wing government. According to Katz, Netanyahu refused to consider the idea.

Ever since the formation of the new government, senior Likud officials seems to be accommodating themselves to the new situation and trying to improve their standing by voicing criticism of Netanyahu. None of them has called on Netanyahu to resign, however, and they all acknowledge that he is the duly elected leader of the Likud.

They do not do so out of fondness for him, but out of concern about the potential repercussions from Netanyahu’s supporters within the party. But stepping back to see the whole picture and connecting all the statements and interviews by these officials, the inevitable conclusion is that something is stirring in the Likud.

For instance, former Transportation Minister Miri Regev, who is considered close to Netanyahu and his wife Sara, gave a highly publicized interview to Yedioth Ahronoth last August in which she claimed that the Likud discriminates against Mizrahi Jews  — her community. “If Likud members continue to elect leaders with white DNA, another Likud will emerge," she said. This countermovement will be "a real Mizrahi Likud that will give Mizrahim a voice that has been excluded for years,” she said. Regev announced that once Netanyahu is gone, she plans to submit her own candidacy for leadership of the Likud.

Regev did not forget to praise Netanyahu and all that he has done. On the other hand, the interview was full of veiled criticism of the party, which has the support of hundreds of thousands of Mizrahi Jews. Regev seemed to be saying that the party has been led since its inception by white Ashkenazi men. Netanyahu is, of course, the best known and most recent example. He is a wealthy and well-connected individual who comes from a family clearly identified with the Ashkenazi elites.

Other senior Likud officials, such as former Jerusalem Mayor Nir Barakat and former Health Minister Yuli Edelstein, are already preparing to run for the leadership of the Likud. They have recently been joined by the former head of the Shin Bet, Knesset member Avi Dichter, who have started taking steps to advance their own campaigns. All three of them are considered hostile to Netanyahu. They make little effort to hide their harsh opinions of him, at least in private conversations.

The mood has extended to party members who were once considered fervent Netanyahu loyalists, the people who once would have defended him under any circumstances.

Take the former chairman of the coalition, Knesset member Miki Zohar. In the past, he fought Netanyahu’s battles aggressively, harming his own image in doing so. He even earned himself the unflattering moniker “Netanyahu’s mastiff.” Over the last few days, Zohar has been selling a new image of himself as a politician who has learned from his mistakes. He has expressed regret over all the verbal spats in which he was involved and claims that the Likud fell from power because of its aggressive style. While Zohar is respectful toward Netanyahu, it is not enough to dim the impression that not only is he upset that the party fell from power, but that he blames Netanyahu for the current situation.

Netanyahu certainly hears all of this, as he is updated about every new interview. However, he is not sharing his own plans. He maintains a presence in the media and on the ground, in Likud bastions, and seems to be sending a message that he is staying on so that the Likud can return to leading the country. Nevertheless, the new government appears stable for now, and its members are united around the goal of preventing Netanyahu’s return. How long will Netanyahu wait for his chance to return? Is it a matter of months? Years?

Under these circumstances, senior Likud officials are once again finding themselves stymied by the man who has been able to win the party’s supporters over and create a sense of identification between him and them, as is evident in the polls. Even in the opposition, Netanyahu remains the most popular political figure in the country, beating everyone on the left, right and center by a significant margin. The Likud has not lost any strength in the most recent polls. In fact, some of them show it growing stronger. Netanyahu is also still rated as the person best suited to serve as prime minister.

One source close to Netanyahu told Al-Monitor that Netanyahu will intensify his ground game in a matter of days. He will visit towns long considered Likud bastions and hold political meetings in Metzudat Ze’ev, the party’s mythic Tel Aviv headquarters, to show that he is still in charge.