Israel's Likud Breaks from the Past

With the ouster of Reuven Rivlin, the last of the Likud's “blue bloods,” the party has changed from Jabotinskian ideology and its Mizrahi electorate in favor of the settlers, writes Mazal Mualem. 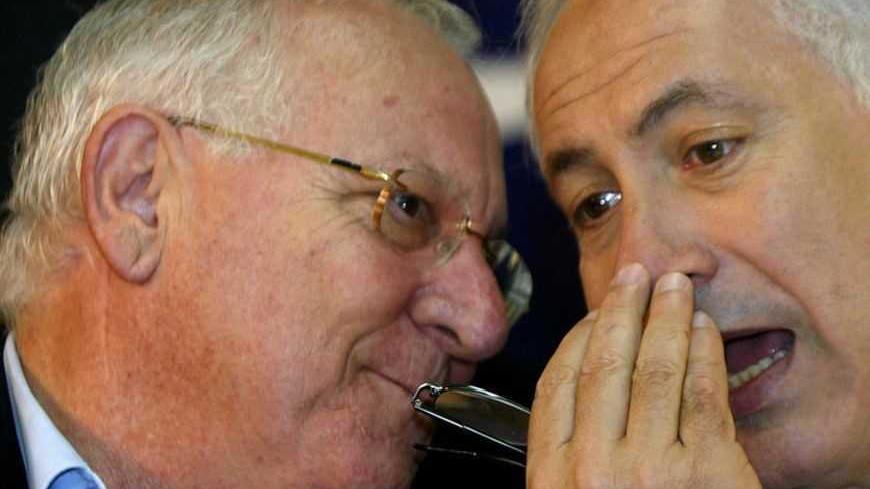 The Speaker of the Knesset Reuven “Rubi” Rivlin was ousted by Prime Minister Benjamin (Bibi) Netanyahu last week. He was the last of the Likud blue bloods to survive at the top of the party. Like former Knesset Members Dan Meridor, Benny Begin, and Michael Eitan, Rivlin personified [founder of the revisionist movement] Ze'ev Jabotinsky’s original concept of hadar (“personal nobility”) which has become part of the Likud's DNA, and provided it to the party even at its lowest ebb.

The dynastic ties of those other three men were not enough to keep them at the party’s helm. They were expunged from its Knesset list last November by the rising power of the extreme right among Likud party members. It was an act of revenge, taken after these legacy candidates tried to block legislative efforts that they deemed anti-democratic: they defended the Supreme Court and called on the government to respect its ruling to evacuate illegal outposts in the West Bank.

Their disappearance from party life reflects deep-rooted sociopolitical changes within the Likud over the past few years. It has metamorphosed from being the party of the development towns to the political base of the Jewish settlers in Judea and Samaria. The latter took over the party’s institutions in a well-organized and systematic manner and ultimately determined its destiny. The process began years ago, but it was only realized fully in the last elections, when the Likud was transformed from a moderately rightwing party that focused on social issues into a party whose dominant core is identified with the extreme right, both ideologically and politically.

Certainly there are personal reasons behind Rivlin’s ouster by the prime minister. Netanyahu simply didn’t like him very much. It was the ouster of former Minister without portfolio Ze'ev Binyamin "Benny" Begin that symbolized more than anything the decline of the Likud in the periphery, once the source of its electoral strength. It was the periphery that propelled the party toward its most dramatic achievement: the “Turnover” of 1977.

Benny Begin never bothered to make any special efforts to get elected to the top of the party list. His surname alone automatically ensured him a place in the Likud’s highest echelons. The masses of Likud voters of Mizrahi [North African and Oriental] heritage in the development towns who admired his father, former Prime Minister Menachem Begin, believed that his son perpetuated the elder Begin’s legacy. Begin was the hero of the straggling Mizrahim living in the development towns. He provided them with access to government, invested in their wellbeing, and most importantly, offered them warmth and legitimacy. It was enough to simply say the name Begin to set hearts aflutter among Likud supporters of the past. For the settlers, however, this ancestry was not enough to open any doors, and the younger Begin found himself out of the game.

More than anyone, the elder Begin shaped the identity of the Likud for over three decades. It was during his tenure as head of the party that a young Mizrahi leadership emerged on the local level, in the development towns, and it was these new leaders who redefined the Likud’s social character. David Levy from Beit She'an, Shaul Amor from Migdal HaEmek, Meir Shitrit from Yavneh, former President Moshe Katzav from Kiryat Malachi, and Yaakov Edri from Or Akiva were all elected to head their towns, but they also emerged rapidly as an important part of the larger Likud leadership.

Each of them eventually joined the well-established Ashkenazi blue bloods around the cabinet table. Minister Silvan Shalom from Beersheba and outgoing Minister Moshe Kahlon from Givat Olga may have represented a younger generation, but they also managed to carve a place for themselves among the party’s leadership. This coalition of Mizrahi immigrants and the founders of the Likud who emerged from the pre-state undergrounds and the Beitar youth movement of Eastern Europe was based on a “confederacy of the oppressed,” which challenged the [left socialist] Mapai party’s traditional hegemony in Israeli politics.

Former minister and member of the HaTenua party Meir Shitrit often describes the moment that he decided to run for Head of the Yavne Regional Council. It was only natural for him to approach the local branch from the Ma’arach [Labor party] in his town to gain support of the ruling party, but they immediately rejected him. When Shitrit turned next to the local branch of the Likud, he was greeted with open arms and more. Just a few months later, he was elected head of the regional council for the Likud party. This story illustrates one simple fact. The bond between the people living in development towns and the Likud was not at all based on nationalist ideology, at least back then. It was, first and foremost, social and emotional.

Menachem Begin played a key role in cementing this relationship. He knew how to appeal to the traditional, folksy sentiments of the Mizrahi community, so that during the course of the 1970s and 1980s, he was able to turn all of the development towns into Likud strongholds. He did this while ensuring that these towns had adequate funding for a variety of social projects, chief among them, the “Rehabilitation of the Neighborhoods” project.

Begin was also a talented rhetorician, who knew how to invigorate his listeners. When he appeared to speak in the main squares of the development towns, he addressed his audience with the words, “My Jewish brothers and sisters” (this happened long before HaBayit HaYehudi chairperson Naftali Bennett came up with the idea of using the electoral slogan “My brother”). With his considerable talents, Begin was able to make the Mizrahi community independent and self-aware. Over time, he turned them into a voting block that determined the outcome of elections. Begin may have been born in Poland, but he was able to penetrate deep into the hearts of Mizrahi Jews (at the time, there were even those who believed that he had Moroccan roots).

The process by which the Likud distanced itself from the periphery has been taking place for the past decade. It was, however, Netanyahu who really set it in motion, when he served as Finance Minister (in Sharon’s government) and spearheaded the policy of cutting benefits. Revenge was quick in coming. In the 2006 elections, residents of the development towns, which had since become cities, turned a cold shoulder to the Likud. As a result the party won just twelve seats, the least it had ever won in its entire history.

It was during those years, in the wake of the traumatic evacuation of settlements as part of the Disengagement Plan in Gaza, that the settlers’ plan to seize control of the Likud from the inside began to be realized. The settlers had one goal in mind. They wanted to stop any future disengagement before they were actually carried out.

Ever since then, the number of people from the far right who have registered as members of the Likud has grown year after year, and the party’s electoral strength has shifted from the towns of the periphery to the settlements of Samaria. Inevitably, this process has had an impact on the members of Knesset. They were quick to realize that if they want to be reelected, they need big bases of supporters in the Occupied Territories. Many of them began “skipping” from one settlement to the next, courting the politically rightwing electorate, but as a result of this, they invested less time and resources in the country’s social periphery.

The most recent Likud primaries offered a clear expression of these changes. A group of new Knesset members, including Danny Danon, Tzipi Hotovely, and Yariv Levin formed a lobby on behalf of the settlers, both in the Likud and the Knesset. This ensured that they made it onto the top ten slots in the Likud’s list of candidates. At the same time, Mizrahi representation among the party leadership dwindled (once Kahlon retires, Silvan Shalom will be the only Mizrahi minister representing the Likud in the new government).

Nor did it help that the Likud joined forces with Avigdor Liberman’s party, which is considered a “white,” Russian party, far removed from tradition. But by then it was already too late for many traditionally-oriented Mizrahi Likud members. They had already turned their backs on the party.

This bothers Netanyahu. He was too late to notice that his party was being taken over by the right, and he didn’t do a lot to minimize the damage. Right now, the only option he has left is to turn back to the potential electorate living within the Green Line and to bring them “home.”

It won’t be easy. As a first step Netanyahu must hold a huge roll call to get new blood flowing into his party and to diminish the settlers’ power and influence. This is absolutely essential if he really wants to restore the Likud’s lost identity.