Prime Minister Benjamin Netanyahu has nurtured his relationship with Likud members for more than three decades. Now he's not sure that they will continue to follow him. 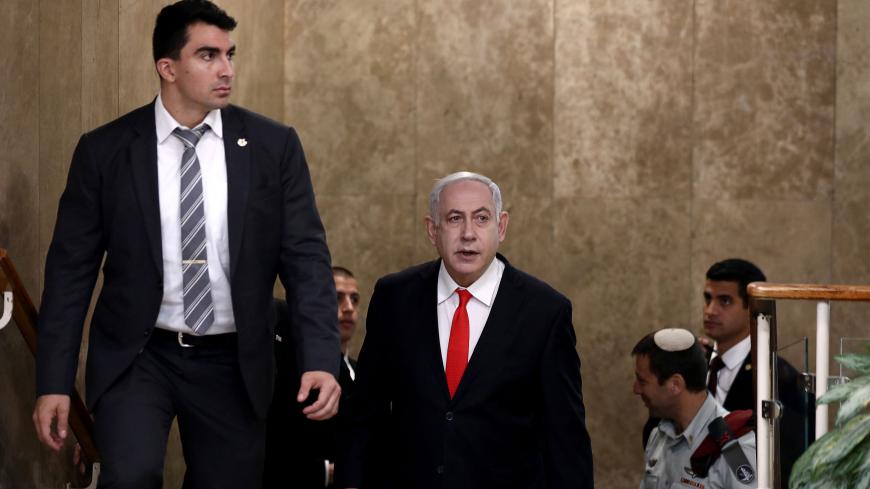 When Prime Minister Benjamin Netanyahu’s convoy pulled up to Airport City, near Ben Gurion Airport, on the afternoon of Dec. 16, several Likud ministers were waiting for him in one of the large spaces there. With them was the staff of his primary campaign against challenger Gideon Saar. Another hectic meeting ahead of the Likud primaries scheduled for Dec. 26.

Netanyahu has served consecutively as prime minister for over a decade, but he also failed twice in 2019 in his attempts to form a government. Since then, he has been indicted for bribery, fraud and violation of trust. Now he needs to win the upcoming March election more than he’s ever needed to win before. The idea that he is the party’s only leader can no longer be taken for granted. As soon as Saar accelerated his attacks and launched his own campaign to lead the Likud, Netanyahu needed to fight for his position and leadership. So he fights.

Netanyahu has a very tight and well-organized timetable ahead of him until Dec. 26. He shows up every morning at his primary headquarters and calls Likud voters personally, based on lists prepared in advance. These are personal conversations that always begin with the sentence, “The prime minister would like to talk to you.” Netanyahu himself then has a brief conversation with the person on the other end of the line. He refers to the man and woman by name, and mentions how he knows them, along with a few remarks about the role they have played in the party during his many years in the Likud. Some of them are Saar supporters. Others are wavering and need a boost. Netanyahu comes along and asks for their help. It’s that simple. “I need your support. It’s important to me,” he tells them. Netanyahu is planning to have as many as 2,000 such conversations by next Thursday. He believes that receiving a personal call from him will have an impact: It will wake people up from their stupor and get them to the polling stations to support him.

The goal that Netanyahu has set for himself is to reach each of the 110,000 registered members of the Likud directly. He will do this through phone calls and by personal appeals on social media, mass rallies and parlor meetings. He has at least three gatherings a day, with a focus on events in Likud strongholds. For example, on Monday, he was in Lod, Ramle and Holon. On Tuesday he is scheduled to visit the north and hold gatherings in Nahariya, Acre and Haifa, as well as a special gathering for Druze Likud supporters. Between these events, he personally intervenes to prevent those heads of local authorities, who are considered close to Saar, from expressing support for his rival. As of Monday, Netanyahu convinced the mayor of Safed Shuki Ohana to hold a gathering in his home. Ohana was just about to announce his support for Saar.

He will cover the entire country by Thursday. His rallies are packed. People cram into private homes to attend his parlor meetings. Everywhere he goes, he is treated like a rock star — taking photos, shaking hands, cajoling his supporters and giving himself to them. A few dozen people were invited to a parlor meeting in the home of Zeev Nissim, a member of the Likud Central Committee from Holon. Several hundred showed up. It was impossible to let them all in. “It’s remarkable to see how they forgive him for everything,” one minister who supports Netanyahu told Al-Monitor on condition of anonymity.

Hidden within these remarks is the force behind the relationship between Netanyahu and the Likud ever since he first burst into their lives in the late 1980s. Back then, he was a promising young man who just completed a successful term as Israel’s ambassador to the United Nations. Over time, he became their pride and joy.

Netanyahu has been competing within the Likud for over 30 years, ever since he was first elected to the Knesset back in 1988, when he was just 39 years old. Within just a few years, he introduced the open primary system to the party, added tens of thousands of new members and won a campaign to become head of the Likud when he was just 45. Then, against all odds, he brought the Likud to power when he defeated Shimon Peres in the 1996 election, right after the assassination of Prime Minister Yitzhak Rabin. The party, and the right in general, was all battered and bruised at the time. It was Netanyahu who got them to stand proudly again. They have devoted themselves to him ever since.

Since then, the relationship between Netanyahu and his Likud supporters has seen its ups and downs. He disappointed them, and they abandoned him, but in the end, they always came back. The lowest point in this turbulent relationship came on the eve of the 2006 election. Likud supporters accused Netanyahu of being behind the rift in the Likud and the creation of the Kadima party by Ariel Sharon, and they took their revenge on him for the financial decrees he imposed in his capacity as finance minister. These were his toughest primaries in the party. He ran against Foreign Minister Silvan Shalom, eventually beating him by just a few points. To do this, Netanyahu spent days on end making personal calls to hundreds of Likud supporters, asking them to help him. He visited branch offices in all the party strongholds, too, but in some of them he got the cold shoulder. In a few cases, he was even booed. Then, in the general election, the Likud under Netanyahu crashed, winning just 12 seats. Nevertheless, he survived an attempt to depose him. He has not been asked to defend his position as leader of the Likud since that time.

Netanyahu certainly realizes this. He is fully aware that he cannot take this victory for granted. Saar has been laying the groundwork for years, crisscrossing Likud territory and planting the seeds for his own victory. He is highly regarded and popular. He has always managed to find himself a top position in the Likud Knesset list. And he has been waiting for this chance for a long time. He is no less hungry for victory than Netanyahu, and if he can’t beat the prime minister, the least he can do is gain a respectable showing. He is expected to win automatic support from the “New Likud” group and from Likud voters from the aerospace industries, who were recruited to the Likud by former minister Haim Katz. Saar is now asking them to vote for him. This group alone consists of thousands of eligible voters. And Saar also has the support of those who think that Netanyahu should give up his seat so that he can fight his legal battles away from the political spotlight.

Netanyahu is Israel’s most experienced politician. He is also the best campaigner, capable of interpreting in-depth polling at the highest levels. He is intimately familiar with public sentiment, too, especially when it comes to the Likud. And yet, the scope of this final variable — the idea that he should fight his legal battles away from the political spotlight — is the one thing he cannot gauge fully. He will only find out next Thursday, and with that, he and the Israeli public will learn whether this is the end of the long, close, but often turbulent relationship between Netanyahu and the Likud.