Prime Minister Benjamin Netanyahu is hammering Likud members with the narrative that police investigators and the left are not out simply to get him, but are after them and Likud party rule. 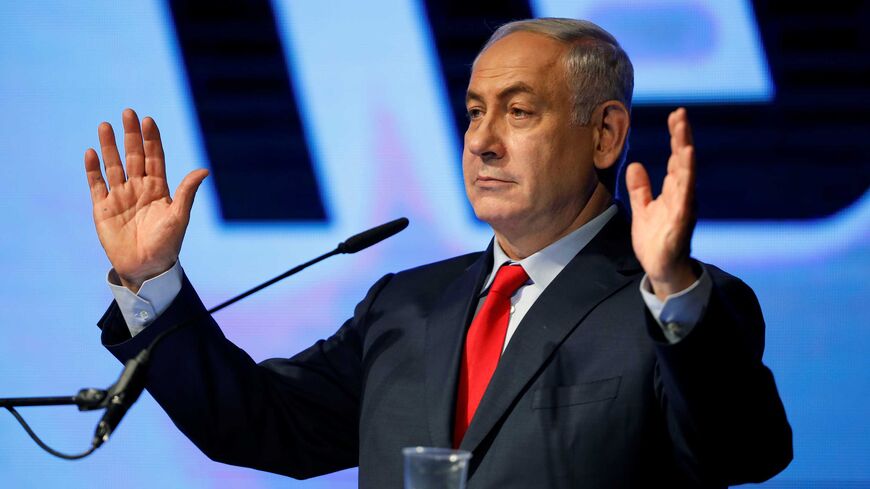 Israeli Prime Minister Benjamin Netanyahu speaks during an event by his Likud Party to show support for its leader in Tel Aviv, Israel, Aug. 9, 2017. - REUTERS/Amir Cohen

Prime Minister Benjamin Netanyahu delivered a lengthy speech Aug. 30 at the traditional Likud toast marking the forthcoming Jewish New Year. The most significant part of the address was not his attack on Meni Naftali — the former caretaker of the prime minister’s official residence who has sued Netanyahu's wife, Sara, and is at the forefront of anti-Netanyahu protests — nor was it his harangue against the left-wing media for allegedly agitating to unseat him. Rather, addressing thousands of riled-up Likud activists, Netanyahu laid the political groundwork tying their destiny to his personal fate.

After talking about the weekly protests by “the left” near the home of Attorney General Avichai Mandelblit, claiming that they were designed to “pressure law enforcement authorities to indict me, at any cost,” he added the following: “Look at the contempt and the arrogance with which they [the left] mock us. They don't just despise us, they despise something much deeper. They are actually contemptuous of the people's choice. They despise the democracy for which they supposedly speak.” The media, Netanyahu added, do “everything to hurt me and my wife, because they think that if they take us [the Netanyahu family] down, they will take us all [the Likud, the right] down.”

This political strategy of claiming the Likud itself is targeted is intended to provide Netanyahu with a safety net in the stormy period ahead in light of the police investigations he is facing, under caution, and the debates in the attorney general’s office that will determine whether he is prosecuted. Netanyahu is, in fact, attempting to sear into Likud members' consciousness that he and they share the same fate. He is telling them, “It’s not just me they’re after. They’re after every one of you.”

In short, Netanyahu is turning them into hostages, knowing that no one in the Likud — not senior members, not Knesset members, nor government ministers — will likely dare oppose him, even if he gets served an indictment. No one, that is, except Knesset member Benny Begin. None of the party members who aspire to one day inherit Netanyahu's post wants to take part in a plot to unseat a strong incumbent prime minister who has brought the Likud to power time after time.

Netanyahu knows well what makes Likud members tick. He, after all, has molded them over the past two decades. When he says of the left, “They despise something much deeper,” he can rest assured that this comment will have the desired effect of mobilizing the Likud rank and file for his personal war of survival.

The Likud leadership that convened Aug. 30 knows what Netanyahu is up to, but its hands are tied in regard to his manipulations. Within the past month, Netanyahu has easily stamped out buds of a rebellion in the party stemming from his troubles with the police, a rebellion that manifested itself largely in silence by top party leaders, but whose failure to speak out has ultimately turned them into loyal soldiers in his war. It appears there is not a single one among them willing to stand up and tell it like it is: Netanyahu and his wife are embroiled in allegations of criminal wrongdoing totally unrelated to Likud members, whom they are now conscripting for the fight of their lives. The Netanyahus' corruption-tinged actions, hedonism and perception of themselves as the state and of the party as themselves are what landed them in police interrogation rooms.

Netanyahu’s wily tactics are turning Likud members into his partners in destiny. He shackles them to him using mantras designed to brainwash them into believing that the police probes and his possible downfall are directed at them personally. As if that were not enough, David Bitan, coalition chairman and considered to be the strongest Likud figure after the prime minister, expressed the very same idea in a speech he delivered before Netanyahu spoke to party members at the toast.

Bitan was a one-man warm-up act, attacking the media for its “relentless propaganda.” Sounding totally in sync with Netanyahu’s strategy, the coalition whip said, “People tell me they like how I talk on television and the radio. I want to tell you, I am you. I am speaking in your name.” Here, too, the message is clear: You are me, you are the prime minister. Sophisticated yet simple.

The Likud get-together was an authentic reflection of the party’s contemporary face. Thousands of activists, some of them bused in to the event, drank red wine and feasted on an abundance of food. They provided the media and the public with a cheerful demonstration of power, just as they did at a previous pro-Netanyahu rally Aug. 9.

There are virtually no vestiges left of the Likud of the pre-Netanyahu era — no sign of rivalries at the top, of various camps among the rank and file, of varied ideologies, of democratic characteristics. These have all disappeared, evaporated or been trampled by Netanyahu. There is no party, no party leadership. There is only one man around which the party revolves. This was obvious even in the invitation sent to party members for the event. A full-body photo of Netanyahu took up significant space against his favorite blue backdrop.

The speeches Netanyahu delivers at the toasts he has hosted in the run-up to major Jewish holidays since he returned to power in 2009 had in the past focused on issues of national interest — that is, defense, diplomatic and economic policies. These topics have now fallen by the wayside, into the shadow of his battle for survival.

As far as Netanyahu is concerned, the strategy has been a huge success. A prime minister devotes significant chunks of his festive holiday toast to a skirmish with his former caretaker and not a single Likud figure dares call him out over the absurd and embarrassing performance. He can now sit back in his chair and relax. The Knesset convenes for its winter session at the end of October. Netanyahu is still prime minister; he is faring well in the polls; the Likud and its coalition partners are providing him with a safety net, for now.

Meanwhile, Netanyahu continues working nonstop to strengthen these girders. That was the case when he pledged at an Aug. 28 ceremony marking the 50th anniversary of Jewish settlement of the West Bank that there would be no more uprooting of settlements, a message directed at the hard-core right. This is what he is doing day in and day out on social media, driving home his narrative on a connection between the left wing and the police investigations, mobilizing the Likud to wage his battles. He provokes, divides and incites.

Netanyahu has succeeded in surviving politically within the Likud and in the ruling coalition despite the shaky legal ground he stands on. He is trying to drag his grim legal predicament into the political arena with only one goal in mind: hammering home the message that all the investigations are designed to bring down Likud and right-wing rule. He is hoping that something of this message will have an impact on the heads of the law enforcement officials tasked with determining his fate.