Israeli Prime Minister Benjamin Netanyahu’s support from Likud members runs deep, and it is related to the role played by the Likud Party in battling Mizrahi discrimination. 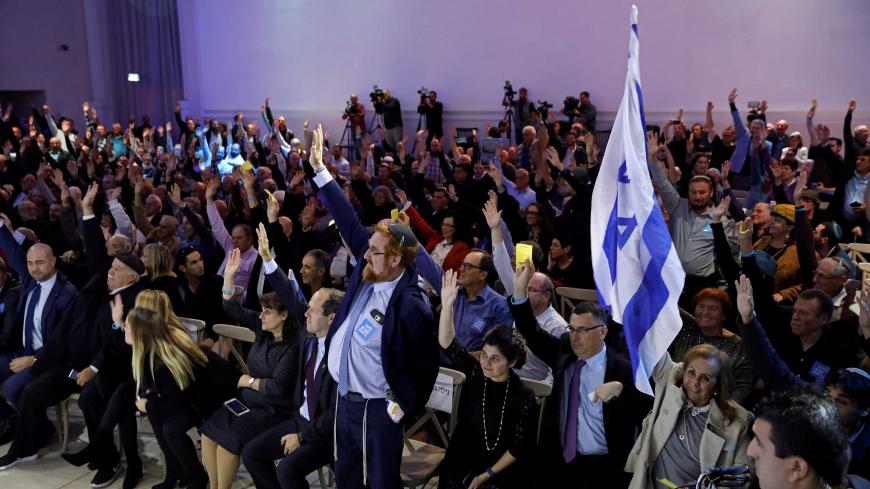 Likud supporters gathered on Jan. 11 in the southern town of Eilat for the third annual Likudiada weekend happening. Though unofficial, the event attracted much media attention. And it was one of those media reports that exposed the essence of the gathering. In fact, one moment during the Channel 2 Friday night show report really clarified what the Likud base is all about.

The Likud base constitutes that hardcore group of voters who are convinced that all of the corruption scandals surrounding Prime Minister Benjamin Netanyahu are part of a larger campaign by the left and the media to attack Netanyahu and ultimately bring him down. This voter base will always slip the MaHaL (letters representing the Likud list) ballot into the ballot box. Those letters are their way of expressing a wide range of intense emotions, a sense of persecution, pride, identity and a common fate.

This revealing moment, exposing the inner workings of that voter base, was offered by journalist Danny Kushmaro, who interviewed Daniel Katz, the chairman of the Founders' Secretariat of the Likud. Like thousands of other Likud supporters, Katz went to Eilat for the Likud Party event. The interview started with Katz offering a spirited defense of the prime minister's son, Yair Netanyahu, and his infamous visit to strip clubs, which was exposed the previous week. "A 23-year-old kid did something stupid two years ago," Katz reacted, "and people are acting as if the whole country just collapsed." In a moment of enlightened insight, Kushmaro responded to Katz: "All of a sudden, it clicks. You and your friends treat the Likud like a soccer team. No matter what."

These notions explain why, as surprising as it actually is, Netanyahu somehow managed to survive for well over a year despite serious criminal investigations into his behavior, not to mention the embarrassing family scandals involving his wife, Sara, and now his son, Yair. How is it possible that no one in the Likud is anywhere near as popular as Netanyahu despite all of that? The answer lies in the tight bond between the Likud Party and its base. The ability to evoke the intense feeling of being the underdog when dealing with political rivals on the left is the stuff from which identity and common destiny are made. Like late Likud leader and Prime Minister Menachem Begin before him, Netanyahu has succeeded in making these bonds and commitments especially strong.

Begin never found himself entangled in a criminal investigation nor did he incite against the left or the Israeli Arab population. Nevertheless, he spent years in a political desert (with Labor as the long-year ruling party), serving as the highly regarded leader of a midsized party dismissed by many on the left. Half a century has passed since then. It has been four decades since the government turnover of 1977, which brought the Likud to power and made Begin prime minister. Nevertheless, the feeling of victimhood and persecution remains strong in the Likud. It seems to pass from one generation to the next in the Likud base.

It is currently estimated that the Likud’s hardcore base accounts for 12 seats in the Knesset. These are the most devout voters — ones who would vote Likud no matter what. They are the same people who remained loyal to their party in 2006, after Kadima split from the Likud, and during the ensuing crisis. Back then, when many of the Likud's top leaders, including party chairman and Prime Minister Ariel Sharon, picked up and quit the party overnight, it was in no way certain that the Likud would be able to survive the blow. But the party's base — its founders, their children and their grandchildren in Likud strongholds along the periphery and traditional Mizrahi voters from periphery towns — saved the party from total annihilation.

Although the Likud won only 12 seats in the 2006 election, it returned to power in 2009 with 27 seats. Netanyahu may have led the party during the lowest point in its history, but he also rehabilitated the party and led it to two more victories in the voting booth. Over the last year, Netanyahu also strengthened the emotional bond between himself and his base and, as the criminal investigations gained momentum, between himself and even wider circles of supporters.

Netanyahu actually has two bases with which he wins elections. The first is the Likud base, while the second is his base among the right at large. These are the independent voters whose right-wing ideology is an essential part of who they are. Netanyahu sells himself to them as being strong in dealing with the Palestinians and as protecting the settlements.

Despite all the crises faced by the prime minister and despite his murky legal situation, this year's Likudiada was the biggest since the event was first launched in 2016. Some 2,000 people of the Likud base attended the Likudiada (at the cost of $520 for a couple at the hotel). And although it was not an official party event, it drew Knesset members and ministers alike, garnering considerable media attention. The fact is that there wasn't a single TV show, whether news or entertainment, which did not refer to the Likudiada. Teams of journalists descended on Eilat for three days, and news reports and images flooded social media.

Today, there is no party in Israel as animated and combative as the Likud or so outwardly identified with its leaders. In an age of one-man parties like Yesh Atid's Yair Lapid, Kulanu's Moshe Kahlon and Yisrael Beitenu’s Avigdor Liberman, this is a very unusual phenomenon, and a fascinating one at that.

Now that the Cabinet approved the 2019 budget after a month of serious coalition crises, polls released Jan. 12 proved yet again that the Likud suffered no harm. Netanyahu can breathe easy, at least for now.

The approval of the 2019 budget grants the government a level of stability during an otherwise sensitive period of criminal investigations. By approving the budget, all the leaders of the coalition parties signaled that they would stand with Netanyahu, apparently even when the police recommend his indictment for receiving a bribe, as will apparently happen. Even the coalition's weakest link, Finance Minister Kahlon, is likely to provide his support for Netanyahu. After all, he already announced that he will not dismantle the coalition.

Furthermore, after weeks in which the anti-corruption (anti-Netanyahu) demonstrations, which took place every Saturday night on Rothschild Boulevard in Tel Aviv, received widespread media coverage, the number of demonstrators — and the scope of media interest — began to show a decline this week. Most importantly, it happened after a week in which Yair Netanyahu's disgusting recording, which included a problematic comment about the gas pipeline, first came to light.

With this good news, Netanyahu and his wife flew off to India the evening of Jan. 13 for an official state visit. On Jan. 14, the Israeli media was inundated with photos of them getting off the plane in New Delhi, where Indian Prime Minister Narendra Modi surprised them at the airport. It was a victory photo op for Netanyahu and his Likud supporters after a month in which it was not at all clear that his government would be able to survive.