Who benefits from police probe against Netanyahu?

Likud seniors have not openly criticized Prime Minister Benjamin Netanyahu over the criminal investigation against him, knowing full well that Likud members won’t accept a campaign against the incumbent premier. 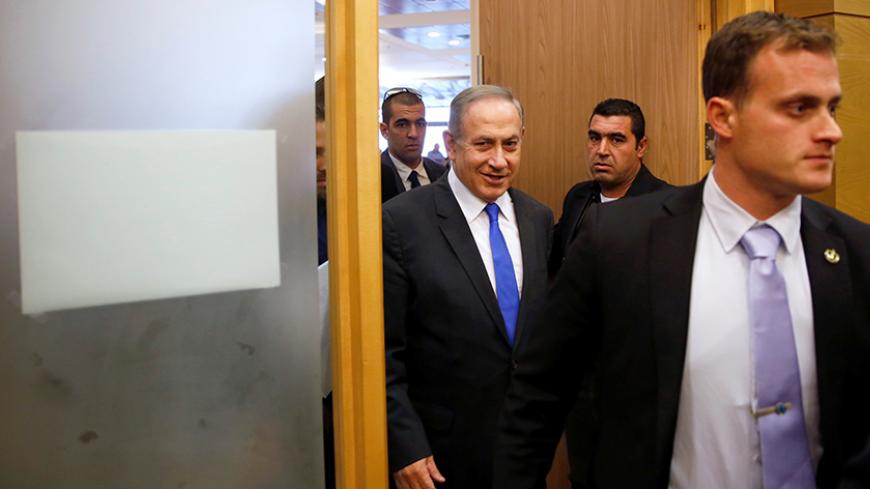 Member of Knesset David Amsalem of the Likud recently proposed a bill that would prevent the investigation of a sitting prime minister. This was interpreted by several Israeli pundits as a move hatched in Prime Minister Benjamin Netanyahu’s close circle following the criminal investigation that was initiated against him. To someone who isn’t familiar with the inner workings of the Likud, it would seem that Amsalem, who serves as the chairman of the Knesset Internal Affairs Committee, heeded the request of the prime minister or one of his associates and initiated the legislation following Netanyahu’s investigation under caution on suspicion of receiving gifts and favors.

But reality is more complicated. Amsalem, who once served as the chairman of the Likud office in Jerusalem, is not one of Netanyahu’s close associates, and he is even considered to be part of the domestic opposition. In March 2016, he threatened, with member of Knesset Avraham Neguise, who is of Ethiopian heritage, to bring down the government if the crisis of bringing the Falash Mura (Ethiopians of Jewish ancestry) to Israel wasn't solved.

Another example of his position regarding Netanyahu can be seen in his Dec. 24 interview with Maariv. While criticizing the size of the defense budget, Amsalem said, “I greatly respect the prime minister, but the Likud isn’t a Hasidic sect. We don’t have a grand rabbi to whom we all answer ‘amen.’”

Amsalem’s legislation is an independent move engendered within the present atmosphere and spirit in the Likud. Thirty-five intensive years inside the beating heart of the large Likud office in Jerusalem made Amsalem understand the soul of his fellow movement members. Thus, this legislation, with the background of the criminal investigation started against the prime minister, which by all accounts won’t end soon, was not (really) meant to save Netanyahu. Besides that, even if the bill is passed, it couldn’t serve Netanyahu, but rather prime ministers who came after him.

Amsalem knows that Likud activists will embrace this bill — not because of their love for Netanyahu (many don’t feel close to him and even complain of alienation from him), but because they get in a defensive position when they feel that the Likud’s rule and its leader are endangered. Amsalem knows how to translate this Likud instinct into political profit.

This is also the reason that since Netanyahu’s interrogation at his residence in Jerusalem and the partial removal of the veil of fog from the criminal suspicions against him, senior Likud members have either backed the prime minister or remained silent. Ministers and members of Knesset exposed to the Likud WhatsApp groups understand where the wind is blowing. Netanyahu, who knows better than anyone how to instigate the sense of persecution and discrimination among his voters, has done his part. In a post on his Facebook page (which will soon surpass 2 million followers), the prime minister went with the safe formula and spoke of years of persecution of him and his family. Ministers Tzachi Hanegbi and Miri Regev, who are also expert at reading the mood of the Likud, have claimed that the investigation is political persecution from the left.

In private conversations with Likud figures, it seems that something in Netanyahu’s political wall is cracking, but no one dares to say it in public. No one will make a statement that could be understood as a blow to the prime minister, thus risking losing supporters. The toeing of the line in the Likud is especially striking if we recall the time when former Prime Minister Ehud Olmert, who headed the Kadima Party, was investigated.

Former Prime Minister Ehud Barak revealed in his book, “My Country, My Life,” that he worked with Hanegbi, who was then a senior member of Kadima, to remove Olmert from party institutions. Today, Hanegbi will not dare do something similar to the prime minister; he is actually expressing support for Netanyahu. In Kadima, which was then a new and unconsolidated party — an eclectic collection of right, left and center — this step of criticizing the premier didn’t seem out of place. Olmert was pushed to the corner and had to give up his position.

“This could not happen with us [the Likud] in any way,” one of the senior ministers from the Likud, who is not in Netanyahu’s close circle, told Al-Monitor decisively on condition of anonymity. “I am deeply familiar with Likud grass roots. And I can tell you that nowadays, in the age of the social networks, at every minute and every second in the party’s WhatsApp networks, the feeling of Likud members is that Netanyahu is being persecuted in an attempt to bring down his government and the right’s rule. These sentiments are very powerful and authentic. Not one of us will go out against him even if the investigation gets tangled up, because it would work against us.”

Even Netanyahu’s sworn enemies who are awaiting his fall in order to vie for leadership of the Likud, like former Minister Gideon Saar, are keeping silent. Saar, like Hanegbi and Regev, knows the soul of Likud members well and does not intend to fall into this trap. Another rival, former Defense Minister Moshe Ya’alon, has been tensely following developments but maintains radio silence. He’s also considering running to lead the Likud after Netanyahu, as is Minister of Finance and Chairman of Kulanu Party Moshe Kahlon.

On the opposition’s side, Yair Lapid, the chairman of Yesh Atid, delivered a gentle critique of Netanyahu. Lapid is trying to win over Likud voters, and a harsh attack of the prime minister could hurt such efforts.

Thus, since Netanyahu’s interrogation under caution, the political establishment has been behaving moderately in public, although behind the scenes there’s some movement felt in view of a certain political weakening of the man considered to be the strongest in the establishment, whose government is not endangered. As investigations of Netanyahu continue, and if it turns out that these are serious criminal allegations, his rivals outside of the Likud will intensify their attacks on him. But when it comes to his party, he can expect to enjoy quiet and support.