A petition submitted by the Likud to the Central Elections Committee thwarted an attempt by Zazim NGO to use volunteers to bring Bedouin voters from their unrecognized villages to the nearest polling stations. 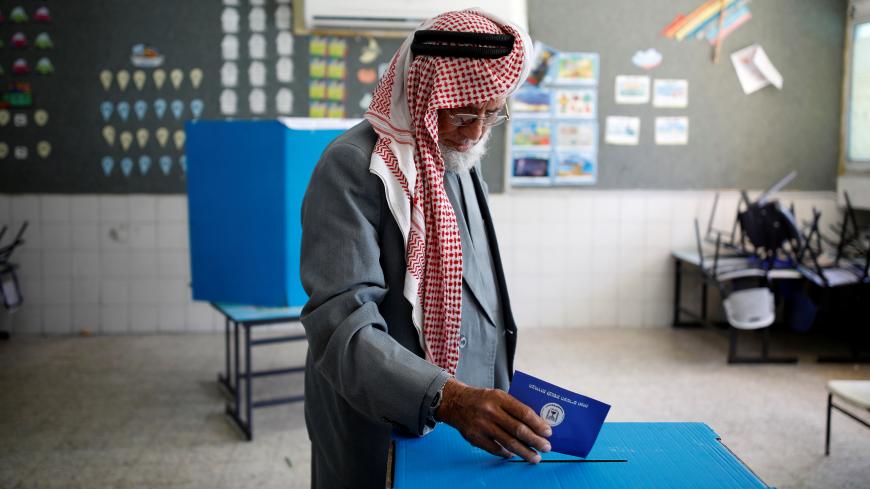 A Bedouin man casts his ballot as Israelis vote in a parliamentary election, at a polling station in the city of Rahat in Israel's southern Negev Desert, April 9, 2019. - REUTERS/Amir Cohen

The chairman of the Central Elections Committee, Justice Hanan Melcer, blocked Sept. 15 Zazim nongovernmental organization (NGO) from using volunteers to drive Bedouin voters in the south to their polling stations. The ruling came in response to a petition submitted by the Likud. Melcer ruled that Zazim could only provide the service if it first registered with the State Comptroller’s Office as an “active election body.”

Zazim defines itself as a nonpartisan political organization dedicated to influencing the public agenda on matters pertaining to human rights, social justice, the struggle against racism, the occupation, and so on. The group was founded through a donation from the New Israel Fund, an organization considered “hostile” by Prime Minister Benjamin Netanyahu and the right, which has called to limit its activity. According to Zazim, 40% of its budget comes from small donations from activists, with the remainder coming from private foundations.

The initiative to drive Bedouin voters to the polls was intended to assist those living in the unrecognized villages in the Negev Desert to fulfill their most basic right as citizens. These communities are seldom connected to electricity, water or paved roads. Many of the Bedouin families in the Negev, and particularly those in the unrecognized villages, live below the poverty line. While eligible to vote, it is particularly onerous for them to get to the polling stations, which are located in more urbanized Bedouin localities such as Segev Shalom, Rahat or Lakiya.

In response to the petition submitted by the Likud against Zazim’s attempt to drive voters to the polling stations, the organization defended its actions by providing examples of why it is important to provide these voters with access, given that the polling stations are so far from their homes.

Similarly, from the village of Swawin, it is a 6-kilometer (4-mile) walk to the polling station in Segev Shalom, or two buses and a walk. In total, it would take roughly 1½ hours each way. From the same settlement to the polling station in Hura, it would be a 2-kilometer walk and two buses — an estimated 2 hours each way, including the wait for buses.

That's why eligible voters living in remote Bedouin villages often prefer to give up that right. And that is exactly what the Likud wants. It knows that the Bedouins who vote for the Arab Joint List will end up strengthening the left.

On Zazim's Facebook page, General Manager Reluca Genea explains that registering Zazim with the State Comptroller’s Office as an “active election body” just so that it could offer transportation would result in serious restrictions on how it could raise money, and that this, in turn, would force the group to shut down. These restrictions are part of a law known as "V-15," initiated and legislated by the Likud.

In the 2015 election, Netanyahu accused an NGO known as V-15 of working to replace him, with the help of large sums of money from overseas. In a video clip released on election day to encourage his supporters to vote, Netanyahu claimed, “Arabs are heading to the polls in droves,” and that it was the group V-15 that was driving them there. Two years later, in March 2017, the Knesset approved an amendment to the Party Funding Law by a majority of 41 to 27 votes. The amendment became known as the V-15 Law. Its purpose was to limit fundraising by NGOs that run campaigns during an election cycle. Among other things, the law determined that any NGO that spends between 100,000 and 400,000 Israeli shekels ($28,150 to $112,600) in an election campaign must register with the State Comptroller’s Office and then be subject to certain restrictions. In this way, Netanyahu restricted activity of “left-wing NGOs” by limiting their ability to fundraise. The petition submitted by the Likud against Zazim is actually the first time that the V-15 law has been used.

Of note, Attorney General Avichai Mandelblit wrote a legal brief of his own in which he argued that there should be no problem with what the NGO was doing. As he explained, the group would not be involved in how that sector votes; it would simply ensure that voters had access to the polls.

Sami Amarna, a social activist who lives in Segev Shalom, told Al-Monitor that Melcer's decision to prevent Zazim from driving Bedouin voters to the polls “is another stage in the attempt to cut Bedouins off from the rest of the country.”

He added, “No one is surprised anymore that the Israeli right and Netanyahu himself have turned Arab citizens in general and Bedouins in particular into enemies. It hurts, but it is done out of political considerations.”

Amarna also said the very fact that the chairman of the Central Elections Committee, who should represent the entire population, granted his stamp of approval to efforts to silence and block Bedouin voters “is disappointing and very hurtful. It’s no longer just some political party or other. It’s the entire country. They tell us, ‘Be good citizens, and you’ll get your rights,’ but even the right to vote — which is a basic right in any democracy — including the Arab states, is being kept from us. They are belittling us.”

Upon learning that Zazim had been blocked, Bedouin activists decided to set up an alternative transportation system to get voters to the polls. According to social activists, Melcer’s ruling motivated them to encourage voters in Bedouin communities to go out and vote, if only to prove that they cannot be silenced or intimidated.

At this stage, it is hard to tell how effective this new system will be, and whether a small group of volunteers really can drive hundreds of voters back and forth.

Amarna claims that the petition submitted by the Likud is similar to the party’s attempts to install cameras in polling stations in Arab villages in order to intimidate voters. “Not only will this dirty campaign fail to intimidate us,” he said, “it will encourage us. Voters will end up going to the polling stations just to prove that they are ‘not afraid.’”

With these words, he may have been responding to the slogan used by Netanyahu in his campaign against the left of "being afraid" in the 1999 election, which he eventually lost.