Netanyahu's bullying gets out Arab vote

Prime Minister Benjamin Netanyahu's camera bill and other efforts to deter Arab voters backfired, leading them to vote in defiance of his intimidation. 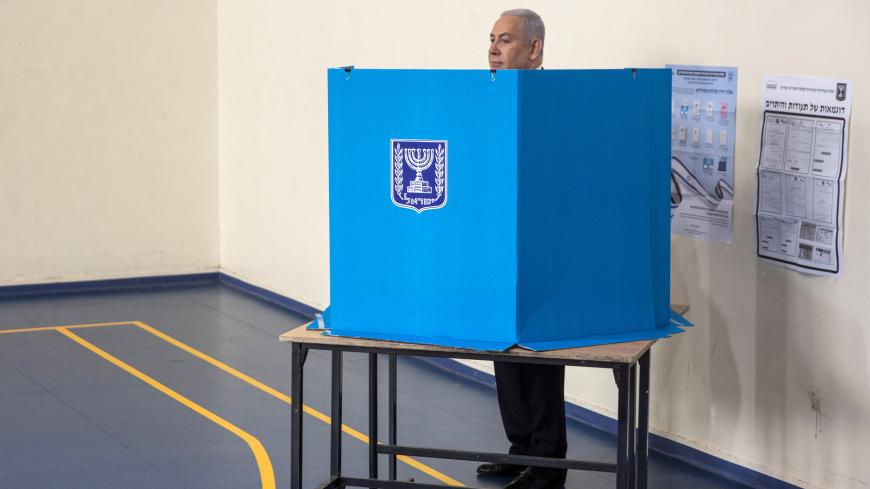 While tight monitoring of the Sept. 17 election results has delayed publication of the official numbers, as of the morning after, even partial results have made the situation abundantly clear. Prime Minister Benjamin Netanyahu and his Likud Party's warnings that the country’s Arab parties would steal the elections had a boomerang effect. The Joint List led by Knesset member Ayman Odeh will likely be the third-largest faction in the 22nd Knesset, with at least 13 of its 120 seats, after the Likud and Blue and White. According to counted ballots, turnout among Arab voters rose by 10% compared to the April elections (60%, far higher than the record-low 49% in April). The Joint List received about 430,000 votes compared to 337,000 in April in what was quite likely a response to Netanyahu’s baseless accusations that fraud in Arab polling stations prevented him from forming a government after the April elections.

Knesset member Ahmad Tibi is chair of the Ta’al Party, one of the factions that form the Joint List. He summed up election day with, “The Arabs flocked to the polls,” paraphrasing Netanyahu’s infamous 2015 video warning of high Arab turnout and exhorting his followers to go out and vote.

Now Arab voters have made Netanyahu’s task of forming Israel’s next government almost impossible. “This is a historic day,” Tibi declared. The extent of the “historic” development was made even clearer shortly after Blue and White leader Benny Gantz delivered a victory speech and called potential partners for a possible future government. Among the first was Odeh.

Although Arab parties have never joined Israel’s coalition governments, prior to the elections Odeh expressed a desire to join a “democratic and liberal” government in which the country’s 21% Arab minority would be accepted as a full partner. However, the center-left Blue and White gave him the cold shoulder both in the lead-up to the April voting and before this week’s elections, fearing any association with the Arabs would drive away Jewish voters. During their many years in power, the Israeli right and Netanyahu in particular have managed to depict Arab lawmakers as a fifth column, illegitimate representatives acting within the legislature to undermine the Jewish state.

Now, with an impressive number of Knesset seats, the same as it garnered in 2015, the faction appears to be a decisive force without which Blue and White will not get to form the country’s next government. Gantz will have to rely on its support to block Netanyahu and the right from the 61-seat majority they need to shape the next government. This is the scenario that Netanyahu feared most.

“Netanyahu placed an effective alarm clock blaring strident music at the entrance to every Arab community, but there is no doubt that it served to wake up our campaign that had been dormant two weeks ago,” Tibi said in an interview before the Sept. 17 exit polls. Joint List activists shared his sentiment. Netanyahu’s claim that the Arabs were stealing the elections and his foiled attempt to place cameras at Arab polling stations in a clear intimidation move actually drove Arab voters to the ballot box.

“There is a difference between the claim ‘The Arabs are flocking’ and ‘The Arabs are stealing,’” explained former Hadash parliamentarian Isam Mahoul, a member of the political department of the Israel Communist Party. I bumped into him at a wedding thrown by a prominent family from the Arab town of Umm al-Fahm, known for its support of Hadash. Other Arab Knesset members and Joint List activists also attended the event, where everyone spoke of a climate of change.

Indeed, up until two weeks before election day, the Joint List’s campaign was somewhat lethargic. Its leaders seemed to feel that turnout would be a repeat of April and that attempts to convince people to vote were Sisyphean tasks. However, it appears that what Netanyahu's 2015 incitement and 2019 camera push failed to achieve, the accusation of electoral theft did. Calling Arab citizens criminals and thieves was too much, and they hit the polls.

Odeh may have been the first to understand the gift Netanyahu handed his party. During the Sept. 11 attempt to push through a bill allowing hidden cameras in polling stations, Odeh walked up to Netanyahu in the Knesset plenary and in a clearly provocative move started filming him with his phone. Hadash activists told Al-Monitor that the stunt was one of the moments that helped energize Arabs to vote. Odeh showed Netanyahu that he could not keep inciting against Arab citizens and not expect an appropriate response.

In his initial reaction to the Joint List’s emerging achievement, Odeh said, “The era of Netanyahu is over,” and “With our votes, we’ve prevented Netanyahu from establishing a government. That is something historic.”

There is no certainty that Netanyahu’s era is truly over, but the Joint List becoming a significant electoral force is certainly a heavy weight for Netanyahu to bear.

Knesset member Yousef Jabarin of Hadash, a resident of Umm al-Fahm, told Al-Monitor, “People believed the inciters could be brought down, that a ballot could be used to topple the right-wing government and influence lives. That was the sense in recent weeks, which culminated in the camera affair and groundless accusations of election theft.”

Yet another Likud effort also backfired. The party petitioned the Central Election Committee against plans by Israeli nongovernmental organization Zazim to drive Bedouin voters from their villages in the south to polling stations. Committee chair Justice Hanan Melcer agreed and banned the organized busing. In response, Bedouin and Jewish volunteers operated an alternative transportation service.

A clearly elated Sami Amarna, a social activist from the Negev Bedouin town of Segev Shalom, told Al-Monitor on election day, “The Bedouin are flocking. I am here at the polling station in Segev Shalom and I am telling Netanyahu and the Likud: What you tried to do to us will cost you Knesset seats. The elderly, sick and people with special needs came to vote despite everything because they want to be part of Israeli society and not be ostracized.”

Netanyahu will have a hard time forming a new government for many reasons, one of them being his own campaign. Arab voters responded to his efforts to besmirch them by coming out en masse to say, “No more.”