While Blue and White senior officials Benny Ganz and Yair Lapid have a solid presence on social networks, Prime Minister Benjamin Netanyahu’s activities on this platform have only gotten more sophisticated. 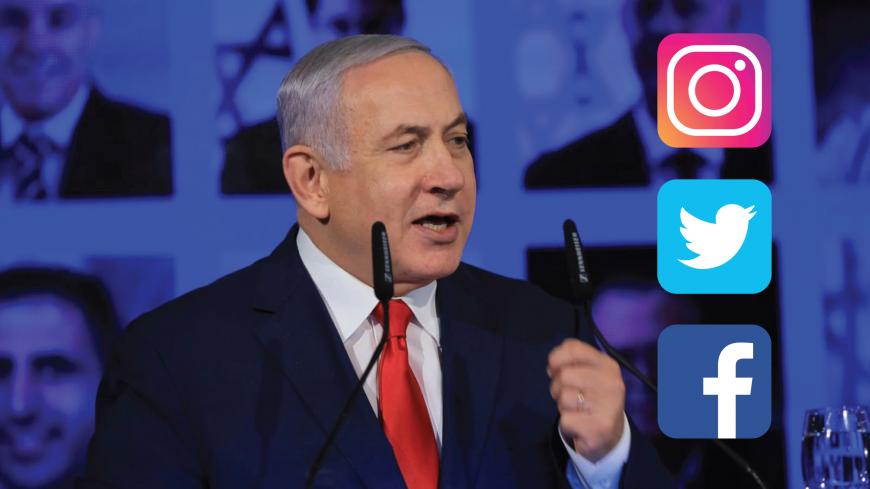 Prime Minister Benjamin Netanyahu is Israel’s leading politician on social networks. He has 2.37 million followers on Facebook, 1.54 million followers on Twitter and 594,000 followers on Instagram. He is also active on Telegram, and has other social network channels associated with the Likud Party or the Prime Minister’s Office. These are impressive numbers, especially given the fact that there are about 5.8 million Facebook subscribers in Israel (as of December 2018) and several hundred thousand Twitter users.

These open and identifiable platforms have seen a surge in activity during the current election campaign. In the final days, and especially on election day itself, these platforms can be expected to reach all-time record usage in Israel. Netanyahu’s digital team can target its messages with pinpoint precision on election day and even in the final hours if necessary, based on breakdowns of the population and user profiles. This data has been collected over time in preparation for the big day by a much larger and more sophisticated system than was available to Netanyahu in the 2015 election. Yet even then, Netanyahu was the Israeli politician with the most prominent presence on social media.

Everyone remembers the “Arabs are going to the polls in droves” video clip, which Netanyahu posted to his Facebook page in the heat of the last election day, on March 17, 2015. It sent its audience a very explicit warning that Israel’s right-wing government was in danger. This was a brief video of just 28 seconds, filmed in a very amateur style in his office, with a map of the Middle East and a flag in the background. Its message however, was also sent to a precise target of hundreds of thousands of right-wing voters via text message. It was intended to encourage them to get out of their homes and go vote for the Likud.

This is a classic example of how a politician can act quickly and precisely through social networks to market a specific message. It could even be used to spread fake news, since it is very difficult to neutralize the impact of propaganda of this sort.

Netanyahu has gotten even more sophisticated since 2015. He increased his number of followers and collected extensive data about them. In his 2019 campaign, Netanyahu gave up entirely on expensive advertising agencies, investing most of the party’s campaign budget on a very sophisticated digital campaign. His Facebook followers received personal messages from him, intended to mimic a conversation, even though this is not permitted by Facebook.

It actually looks as if Netanyahu is everywhere, and certainly on every social media platform. The speed with which he can produce a video — and sometimes even more than one video per day — which then gets distributed to hundreds of thousands of potential voters has transformed the campaign entirely.

On April 7, just two days before the election, Netanyahu produced a video that was filmed on the patio of the prime minister’s Jerusalem residence on Balfour Street. In it, he warned about the complacency of voters on the right. As usual, he blamed this phenomenon on the media. “The left-wing media wants you to stay at home. It wants you to split your vote. Why does the media tell you that ‘Netanyahu is winning,’ that ‘the right-wing bloc is winning”? Because they want to put you to sleep. … Don’t make that mistake. Listen to me. Go vote Likud, and we will win. We’ll show the media that they can’t fool us.”

While activities of this sort are done openly, there are some things that are kept from public view. These are done anonymously as part of a wild campaign that includes fake news and mudslinging. There was, for example, a post by an American woman, claiming that Blue and White leader Benny Gantz sexually harassed her 40 years ago, when they were students at Kfar Yarok high school. The post went viral, receiving 780 shares. Gantz was forced to defend himself and sued the woman who posted the story for libel. The trail led to the office of Likud Minister of Culture Miri Regev, though her direct involvement has not been proven.

Itay Tsamir, a digital marketing and strategy consultant, told Al-Monitor that Netanyahu is in the lead on social networks, and that it is impossible to close the gap in a short time because the prime minister took years to achieve it. As an example, Netanyahu’s chief rival Benny Gantz has just 140,000 followers on Facebook, while the No. 2 man on his list, Yair Lapid, who is considered to be one of the most prominent politicians online, has 429,000 Facebook followers.

In contrast to Netanyahu’s aggressive Facebook campaign, some of which is done discreetly and out of public view, the Blue and White party’s digital presence is respectable, but not outstanding. It is a new party and had no time to establish multi-follower platforms. Activities are conducted through accounts belonging to Gantz, Lapid and Moshe Ya’alon (102,000 followers), but even taken together, they have nowhere near the same number of followers as Netanyahu. Nevertheless, some polls show that Blue and White is the biggest party. It achieved this despite its rather sparse presence on social networks compared with Netanyahu and the ugly negative campaign being waged against Gantz, which includes insinuations that he is emotionally unstable and claims that he was involved in sexual harassment. Although this was never proven, it created a buzz on social networks, amplified by Likud supporters, both known and anonymous.

Particularly interesting is the social network activity of the Zehut Party and its chairman, Moshe Feiglin, who is poised to become the surprise of the current election. Feiglin has managed to attract voters from both the right and the left, even though he emerged from ideological extreme right by using the internet to rebrand himself. Over the last few years, he has accumulated almost 150,000 followers, an impressive number, considering that Feiglin was practically anonymous. Polls now predict that he will win between five and seven seats. He communicates with his followers through long videos in which he lays out his revolutionary ideas, including the legalization of marijuana, overturning the welfare state and repealing the Oslo Accords.

“The way it looks now,” said Tsamir, “digital activity in Israel’s 2019 election ranges from vocal and visible accounts to anonymous ones.” These latter are places where it is difficult to gauge activity or assess their impact. Chances are that it won’t be possible to fully assess the influence that social networks had on the various campaigns even after the election.