Israel's prime minister has dismissed the international outcry, counting on the US president and popular support at home. 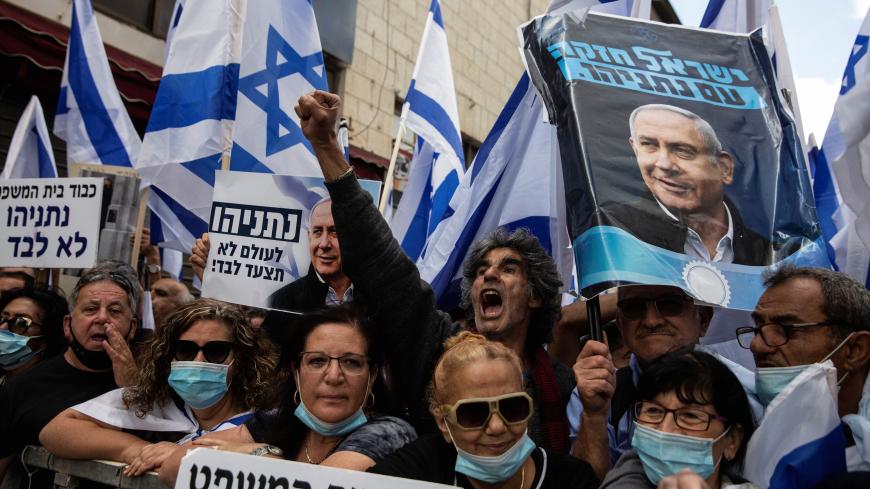 Supporters of Israeli Prime Minister Benjamin Netanyahu take part in a protest outside the prime minister's residence on the first day of Netanyahu's corruption trial, in Jerusalem, May 24, 2020. - Heidi levine/REUTERS

Israeli Prime Minister Benjamin Netanyahu said this week that he will not miss a “historic opportunity" to extend Israeli sovereignty over settlements in parts of the occupied West Bank and Jordan Valley, considering it a “top task” of the unity government.

The prime minister has dismissed or ignored calls by the European Union to hold off, as well as warnings by UN Middle East envoy Nickolay Mladenov that annexation would represent “a most serious violation of international law” and the League of Arab States that annexation would be considered a “new war crime.”

Netanyahu told Likud Knesset members that he is going ahead with a July date to introduce annexation legislation. He's confident he will win on what he considers his legacy issue because most Israelis and US President Donald Trump appear to be in his corner.

More on that below, but first let’s review where some other stakeholders stand.

Abbas: a leap in the dark

Palestinian President Mahmoud Abbas abrogated Palestinian Authority agreements with Israel and the United States on May 20 and transferred responsibility over the occupied territories to Israel in response to Netanyahu's statements on annexation.

Abbas’ announcement “is a leap in the dark,” Ahmed Melhem writes, “as there is no clear-cut Palestinian plan for how to dissolve the agreements with Israel, most notably the Oslo Accords concluded on Sept. 13, 1993, in virtue of which the [Palestinian Authority] was established.”

“Some Palestinian factions doubt the PA’s ability to implement important decisions in response to the Israeli annexation plan” and both Islamic Jihad and Hamas may step up activities in the West Bank, Melhem reports.

“Senior Palestinian officials, such as Fatah Secretary General Jibril Rajoub, insist that the decision is strategic and sincere,” writes Daoud Kuttab. “Yet many are doubting the decision because it seems to come with little planning and almost no details are available. It is being argued that the decision by the Fatah-dominated PLO goes in line with Fatah's practice of making decisions and then making adjustments as they are implemented.”

For now, Netanyahu is unfazed by Abbas’ declarations, betting that the security coordination that matters most to him will likely continue as it is in both parties’ interests.

The Times of Israel reports that the PA has back channeled to Jerusalem that it will keep a tight grip on terrorist groups and prevent any popular demonstrations against Israel. PA Prime Minister Mohammad Shtayyeh confirmed as much Monday when he said the PA will keep order in the West Bank.

“Abbas needs the security coordination with Israel just as much as Israel does,” a Likud minister told Al-Monitor on condition of anonymity. “If he undermines the coordination, he will be hurting himself and he knows it.”

“Neither Netanyahu nor his government colleagues made any statements over the halting of security coordination,” writes Mazal Mualem. “Netanyahu is estimating that he should not fan the flames, but rather leave Abbas an opening to withdraw from his decision.”

The PA later suspended security coordination with the CIA, the last working channel for communication between the PA and the United States on security, Jared Szuba reports.

Another reason Netanyahu may be feeling confident is that Jordan's King Abdullah, who said that annexation would lead “to a massive conflict,” may instead be weighing steps short of war, at least initially.

“Jordan is considering, among other options, suspending parts of the 1994 peace treaty claiming that the Israeli annexation of the Jordan Valley violates the delineation of borders between Israel and Jordan, in addition to being illegal under international law and pertinent United Nations resolutions,” writes Osama Al Sharif. “Immediate reaction may include expelling the Israeli ambassador in Amman and recalling the Jordanian ambassador in Tel Aviv.”

But Netanyahu should not underestimate the stakes for Jordan.

“The unilateral annexation of parts of the West Bank is seen as presenting an existential threat to Jordan’s national security,” explains Sharif. “It not only renders the two-state solution irrelevant, but it resurrects some far-right Israeli claims that Jordan is a de facto Palestinian state. It also raises fears about the fate of over 2 million Palestinian refugees living in Jordan. Jordan had not supported Trump’s peace vision, unveiled last January, and rallied Arab and international support for the two-state solution.”

It’s been a bad week for Defense Minister and Blue and White Party Leader Benny Gantz, co-prime minister with Netanyahu in the unity government.

“In his worst nightmare,” writes Mazal Mualem, “Gantz could not have imagined the major damage that would be inflicted on him on the opening day” of Netanyahu's trial on bribery charges May 24.

“For several but seemingly endless minutes, while standing in front of mask-wearing silent Likud ministers, the prime minister hurled poison darts at the police and the state prosecution office,” adds Mualem. “Now [Gantz] had not only made a political alliance with the accused defendant but also found himself trapped between his promises to defend the legal system and the necessity of retaining a cordial relationship with the defendant.”

Gantz again blandly expressed his reservations about annexation, saying this week, “We will examine how to proceed and we will act responsibly,” but nobody, including Netanyahu, seems to care what he says on the subject.

Gantz has a few cards to slow the annexation train, Ben Caspit writes, by rallying opposition outside Israel, including perhaps “a clandestine call on Jordan’s King Abdullah in Amman or even a hush-hush meeting with Egyptian President Abdel Fattah al-Sisi in Sharm el-Sheikh,” because it seems Gantz has lost the fight inside Israel.

Trump: stick to the plan

Netanyahu has said at every turn that whatever he does on annexation will be in accord with the US administration’s peace plan.

Given the US presidential election year and Netanyahu’s close personal connections with Trump and the family of Jared Kushner, Trump’s son-in-law, senior adviser and lead on the peace proposal, the odds look good for Netanyahu to get the go-ahead for his plans.

The Trump administration’s formal statements have been careful, but with a Bibi tilt.

During a visit to Israel this month, Secretary of State Mike Pompeo said that “annexation is up to Israel.” State Department spokesperson Morgan Ortagus later said, “We think these discussions should be part of the peace process, part of discussions between the Israelis and the Palestinians.”

Are Israelis settled on annexation?

Netanyahu, like any good politician, reads the polls and that might be another source of confidence as his popularity appears to be rising as a result of the trial, Caspit reports.

“There is a majority in favor of partition and retaining the settlement blocs, Jerusalem (the Temple Mount in particular) and the Jordan valley,” writes Efraim Inbar. “A recent poll commissioned by the Jerusalem Institute for Strategy and Security confirmed that over 60% of Israelis (and over 70% among the wider Jewish public) favor extending Israeli law to these areas. The current composition of the Knesset favors incorporation of the Jordan Valley into Israel.”

However, in a perhaps unusual twist, there might be some surprising opposition from a key Netanyahu constituency.

"There is growing opposition to the plan among the settlers’ leadership,” writes Danny Zaken. “While some leaders have encouraged Netanyahu to embrace the plan as a sign of things to come, others have gone so far as to demand that he reject it out of hand. The main reason that these opponents give is that agreement to the proposal in principle would imply Israeli acceptance of an independent Palestinian state in the rest of the West Bank.”

Netanyahu said on May 28 that Palestinians living in annexed areas of the Jordan Valley would not be granted Israeli citizenship, but Israel would have control over security. To the settler critics, he said, “We are not the ones required to give up [territories], the Palestinians are," and that Palestinians "have to recognize that we are the ones dictating security rules over the entire territory. If they agree to all of this, then they will have their own entity that President Trump defines as a state.”