The announcement by the Palestinian Authority of cutting security coordination and warnings by Jordan's King Abdullah have not destabilized Prime Minister Benjamin Netanyahu on his settlement annexation plan. 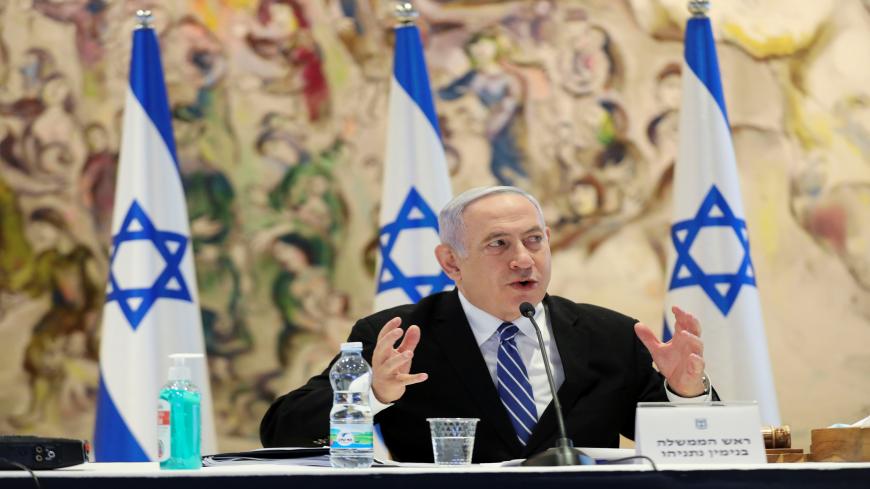 Israeli Prime Minister Benjamin Netanyahu attends a Cabinet meeting of the new government at the Chagall Hall in the Knesset, Jerusalem, May 24, 2020. - Abir Sultan/Pool via REUTERS

This comment might explain why official Israel has been keeping mum and refraining from reactions to Abbas’ escalating declarations. Neither Netanyahu nor his government colleagues made any statements over the halting of security coordination — an issue of vital importance in the battle against terror acts in the West Bank and inside Israel. Judging from the minister's comment, Netanyahu is estimating that he should not fan the flames, but rather leave Abbas an opening to withdraw from his decision.

As a reminder, Abbas made his declaration following Netanyahu’s stated intention to advance annexation of the Jordan Valley and West Bank settlements, in accordance with US President Donald Trump’s peace plan. The unity deal between the Likud and Blue and White parties enables Netanyahu to bring up the issue for vote as early as July 1.

The fact that Netanyahu enjoys the support of the senior partners in his newly installed unity government — leaders of Blue and White party Defense Minister Benny Gantz and Foreign Minister Gabi Ashkenazi, who have expressed backing for the Trump plan — has added a practical dimension to his annexation intentions. At a May 18 ceremony marking his entry into office, Ashkenazi even declared that he views a historic opportunity in the US president’s blueprint for peace with the Palestinians.

Abbas has threatened on numerous occasions to suspend security coordination with Israel. While this is the 11th time in recent years that Abbas has issued such bellicose threats against Netanyahu’s right-wing government, this time they appear more serious. These threats join the harsh warning issued by Jordan’s King Abdullah in an interview with Der Spiegel on May 22 that “if Israel really annexes the West Bank in July it would lead to a massive conflict with the Hashemite Kingdom of Jordan.” Asked whether he would suspend his country’s peace treaty with Israel, the monarch responded, “I don't want to make threats … but we are considering all options,” warning that annexation could also result in the Palestinian Authority’s (PA) collapse.

Israeli military officials have been warning in recent days of the repercussions of the PA’s suspension of the security coordination. According to some Israeli media reports, the coordination on the ground has completely stopped, disrupting communications on intelligence and policing issues with the PA. Taken together, these developments are creating a sense that the decisive moment is at hand and that Israel’s annexation plans are generating an outcry in the Arab world.

However, Israel not only appears indifferent to these scenarios, Netanyahu himself is ignoring the threats by Abdullah and Abbas. In interviews with right-wing media outlets published on May 28 to mark the Jewish festival of Shavuot, Netanyahu sounded more determined than ever to take the historic step of imposing Israeli sovereignty on parts of the West Bank starting July 1 and thereby shape his legacy.

In interviews with the Israel Hayom and Makor Rishon newspapers, Netanyahu described his commitment to the annexation move and to carrying it out this summer, to the extent that it depends on him, despite warnings by senior Israeli security officials of the Palestinian violence that would ensue. Netanyahu said he intends to move forward on the issue in accordance with his coalition agreement with the Blue and White party, according to which he can bring up the sovereignty proposal for a government and Knesset vote once mapping with the United States is completed, and not before July 1. Netanyahu noted that he was working in coordination with the Americans, but that the coalition agreement allows him to promote the sovereignty proposal in the government and Knesset and does not necessarily require a green light from Blue and White.

However, Netanyahu made an interesting headline regarding Jordan, which illustrates the seriousness of his annexation intentions. When asked about the threats by Abdullah, Netanyahu answered that he was convinced the peace agreement between the two states would remain intact. “Peace with Jordan is an essential interest not only for Israel but also for Jordan. I do not think it is about to change. Nonetheless, such moves naturally generate concerns among people,” Netanyahu told Makor Rishon.

Why, then, is Netanyahu so certain that annexation measures would not undermine the peace with Jordan and derail the security coordination with the Palestinians? According to assessments in recent days by Arab affairs analysts, behind the scenes some Arab leaders are signaling that they would not challenge the Israeli move on behalf of the Palestinians. The Arab affairs analyst of Israel Hayom, Daniel Siryoti, reported May 27 that several Arab leaders have met with senior American envoys, including White House adviser Jared Kushner, who is overseeing the implementation of the Trump plan, and essentially gave permission to proceed with the mapping, despite publicly lambasting the US plan.

Siryoti also wrote that sources close to the Jordanian monarchy indicated to him that Jordan is aware of the consequences of abrogating its peace treaty with Israel, such as giving up its special status as custodian of the Muslim holy sites in Jerusalem. The king is also said to be interested in preserving his ties with the US administration. While official Jordanian reactions to Israel’s annexation must be tough in order to avert unrest among the country’s Palestinian population, Siryoti quoted Arab sources as indicating that the Palestinian cause was not as important as other considerations.

“We see what is happening in the areas of the PA in the West Bank ever since Abbas ordered the suspension of the security coordination with Israel,” a Jordanian source told Siryoti. “There is grave concern in Ramallah that Hamas and West Bank radicals will exploit the opportunity to rise up, as was the case in the Gaza Strip after the [2005] disengagement and the halt of security coordination with Israel. Jordan will continue voicing its official opposition to the annexation plan, mainly in public declarations by the prime minister and foreign minister, as was the case recently, and the king will allow the annexation plan to go through with a minimum of damage to Jordanian interests.”

The Likud minister who spoke with Al-Monitor believes Netanyahu has taken into consideration a possible outbreak of Palestinian violence, but also thinks it can be contained. “Netanyahu sees a window of opportunity in the coming months to promote annexation,” the minister said. “He hopes Trump will be reelected, but he cannot be sure. Presumably, quiet contacts are underway with Arab states. Netanyahu has never taken unnecessary risks and I believe that is the case now as well.”