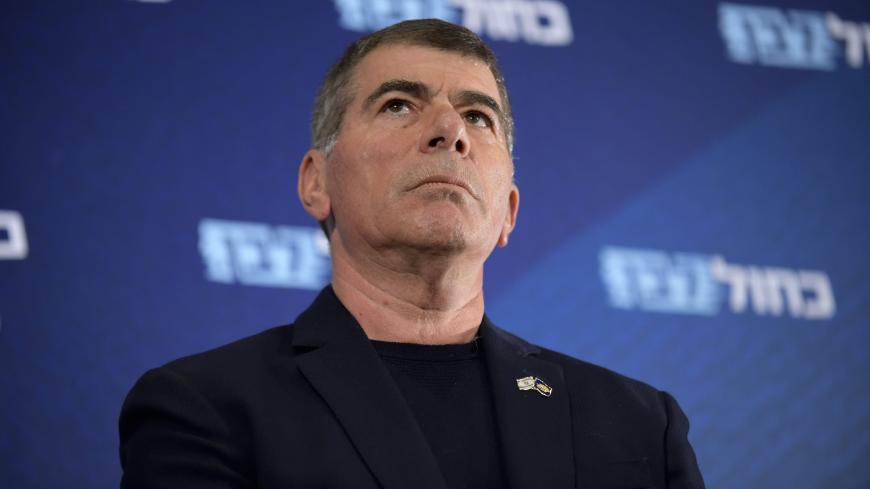 Knesset member Gabi Ashkenazi of the Blue and White party at an election campaign event ahead of the Israeli elections, in Kfar Saba, Israel, Feb. 12, 2020. - Gili Yaari/NurPhoto via Getty Images

Israel’s new Foreign Minister Gabi Ashkenazi embraced today US President Donald Trump’s peace plan with the Palestinians, yet stopped short of supporting any unilateral annexation by Israel of West Bank lands. Speaking at the May 18 changing-of-the-guard ceremony at the Foreign Ministry, Ashkenazi said, “President Trump presented us with a historic opportunity to shape the future of the State of Israel and its boundaries for decades to come."

Ashkenazi was echoing the pledge made last February by Blue and White leader Benny Gantz, who vowed that if elected prime minister he would advance the Trump administration plan and push for the Knesset to adopt it in full. Still, both Ashkenazi and Gantz are aware of the diplomatic landmine planted within the plan, in the form of American acceptance of West Bank settlement annexation. As agreed in the April 20 unity deal, Blue and White will enable Prime Minister Benjamin Netanyahu to present for Knesset vote his annexation plan this summer, but its leadership is reluctant over supporting it.

In his May 18 speech, Ashkenazi emphasized the need to maintain Israel’s peace treaties with neighboring Egypt and Jordan, noting that peace is a strategic asset that must be protected. “I see a great importance in strengthening the ties with the countries with which we have peace — Egypt and Jordan. They are the most important allies in dealing with regional challenges.”

Ashkenazi evidently tried reassuring Jordanian King Abdullah, who has multiplied his warning over the last few days against any West Bank annexation moves. Interviewed by German Der Spiegel May 15, King Abdullah said, "If Israel really annexed the West Bank in July, it would lead to a massive conflict with the Hashemite Kingdom of Jordan." Asked whether an annexation move would lead to Jordan suspending its peace treaty with Israel, the king said, "We are considering all options."

Last week, security experts warned that any damage to Israel’s ties with Jordan would threaten the country’s national security. Maj. Gen. (Res.) Amos Gilad argued May 16, "Annexation will erode our ties with Jordan. It would be a political move without a strategic advantage. I’m sure the IDF [Israel Defense Forces] brass understands this.”

Indeed, Israel’s security-diplomatic front is now in the hands of two ex-generals — new defense Minister Gantz and new Foreign Minister Ashkenazi. Both belong to Blue and White and both are far from enthusiastic about annexation, be it ideologically or security wise. They must now find a way to advance Trump’s plan without engaging Israel in the diplomatically dangerous move of annexation. Anticipating Netanyahu’s first move on the issue, Ashkenazi and Gantz relayed to US Secretary of State Mike Pompeo the difficulties and dangers entailed in Israel annexing the Jordan Valley, especially vis-a-vis the Hashemite Kingdom.

The Foreign Ministry in Jerusalem awaits now to see the strategy their new minister will adopt. In their May 16 discussion about Israel's annexation plans, Bulgaria's Foreign Minister Ekaterina Zaharieva, who currently presides the Council of the European Union, proposed inviting Ashkenazi to their next ministerial meeting. Evidently, she estimates that Ashkenazi is a partner for dialogue.