The Palestinian president's decision to sever relations with Israel means strengthening the larger Palestine Liberation Organization, which represents all Palestinians and is not limited to the occupied territories. 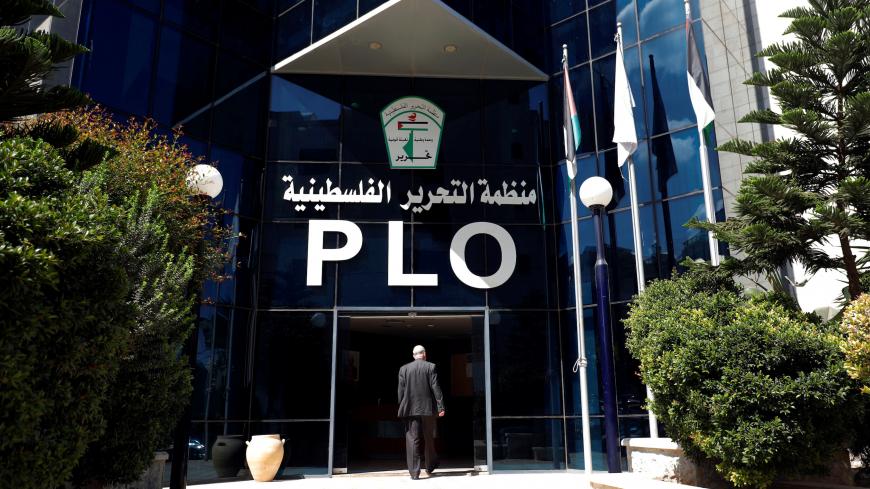 A man enters the headquarters of the Palestine Liberation Organization in Ramallah in the occupied West Bank, Sept. 10, 2018. - REUTERS/Mohamad Torokman

While the long-term ramifications of the Palestinian leadership’s decision to break administrative and security ties with Israel are still unclear, it can only mean the strengthening of the Palestine Liberation Organization at the cost of weakening the local Palestinian government.

Senior Palestinian officials, such as Fatah Secretary General Jibril Rajoub, insist that the decision is strategic and sincere. Yet many are doubting the decision because it seems to come with little planning and almost no details are available. It is being argued that the decision by the Fatah-dominated PLO goes in line with Fatah's practice of making decisions and then making adjustments as they are implemented.

PLO Executive Committee member Hanan Ashrawi agrees that Palestinian President Mahmoud Abbas’ announcement on May 20 means a shift toward the PLO, but feels that the latter needs to be reformed and revitalized. “That’s been the plan of the Palestine National Council and Palestine Central Council for some time. But this needs the reform and revitalization of the PLO and its institutions, including elections, and a readjustment of its relationship to the Palestinian Authority.”

Ashrawi noted that a “lot has to be done if the political and representative mandate of the PLO is to be fully exercised to lead to national liberation and sovereignty.”

Ziad Abuzayyad, a former Palestinian minister, says that to enact the Palestinian president's new decision, efforts must include a strategy to empower the PLO. “Our people are more militant than their leadership and any decision or act that addresses and goes along with the dignity and national aspirations of the people gains support and popularity. The demand to shift from the PA to the PLO and empower the PLO with appropriate representation of all the national and Islamic factions is now at the top of the people's agenda.”

Riyad Mansour, the head of the Palestinian mission to the United Nations, noted in a phone interview with Al-Monitor that the PLO is well represented legally in every UN decision since it was recognized by the international organization in 1975. “We make sure that every decision made at the UN references the PLO as the sole and legitimate representative of the Palestinian people.”

Mansour said that when Palestine was made an observer state in 2012, “We added a line that this will not change the role of the PLO.” Mansour predicts that when a sovereign and independent state of Palestine comes into being, the PLO could become a sort of ruling party. “For us, the model of our future is that of Algeria and South Africa, where their liberation movements — the National Liberation Front, and the African National Congress — became the ruling party once liberation happened.”

Mansour added that a powerful global lobby is forming to stand up to the possibility of an Israeli annexation. “This has been one of the easiest tasks we have undertaken because in the post-World War II era there is a worldwide consensus against the unilateral acquisition of land under the sole justification of power and might. Annexation would violate the UN Charter, international law and the Security Council [resolutions] including UNSC 2334.”

Fadi Elsalameen, a senior fellow at the Washington-based American Security Project, told Al-Monitor that it is too early to make predictions. “The PLO as a representative of the Palestinian people is more popular that the PA, but the question is whether President Abbas is willing to have others in the PLO share with him the decision-making process or not.”

Khaled Elgindy, a senior fellow at the Middle East Institute, told Al-Monitor that it is reasonable to expect the PA to become weaker, not only due to the severing of ties with Israel but also because of matters like the loss of funding in recent years, the ongoing split with Hamas and the PA's loss of its raison d’etre. “What has allowed the PA to survive more than two decades beyond its expiration date was the expectation that it would someday transform into a fully sovereign state. Now that a sovereign Palestinian state is no longer in the cards, thanks to the [US Middle East peace] plan and the apparent triumph of Israeli annexationists, the case for maintaining the PA becomes much harder to make,” Elgindy explained.

Noor Imam, a Amman-based lawyer and  a member of the Palestine National Council, told Al-Monitor that regardless of what happens, the PLO will be the reference point. “The PA was the result of the Oslo process, but the PLO as the legitimate representative of the Palestinian people will be around until liberation takes place.”

In an ironic twist, the elevation of the PLO could be a godsend for some prospective Palestinian leaders who are waiting to occupy the three major posts that Abbas occupies as president, head of Fatah and chairman of the PLO. The more revolutionary leaders will see new opportunities in the latter two posts, irrespective of what Arabs and the international community might want in the president of Palestine.

Some 13 million Palestinians are spread between five million living in the West Bank and Gaza and eight million in the diaspora. If the suspension of coordination with Israel continues and the Palestinian government weakens, the PLO must be revitalized and reformed so it can truly represent everyone. To that end, the priority must be given to unity, which means finding a way to include large factions like Hamas.

While a shift to the PLO is still being discussed, the regional ramifications of such an eventuality have not been widely discussed. Will the Palestinian leadership return to one of the Arab capitals? Will it work to improve its relations with this or that Arab country in return for having its headquarters there? What will this mean to the relationship between Palestine and the world outside? If the current process continues these questions  will need to be answered.