Fatah has come out swinging against what it says is the US administration’s unilateral effort to impose a Mideast peace plan that greatly favors Israel. 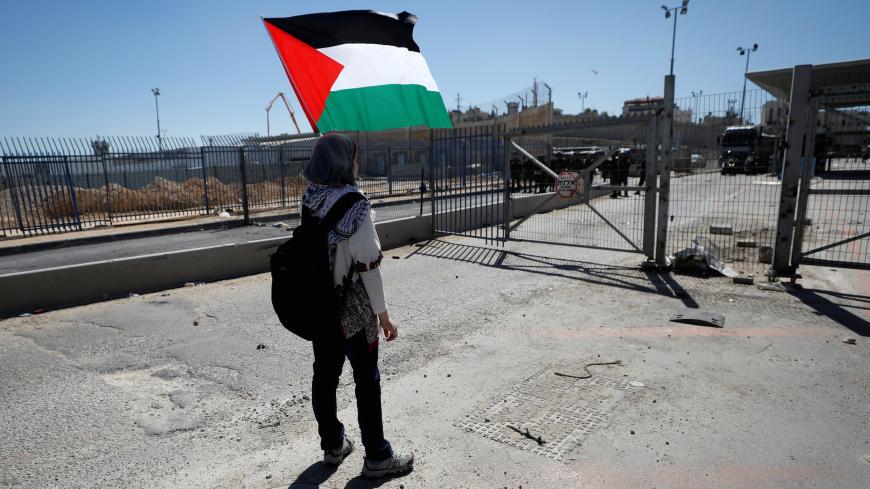 A girl holds a Palestinian flag in front of Israeli troops during clashes at a protest against US President Donald Trump's decision on Jerusalem ahead of International Women's Day, in Ramallah, in the occupied West Bank, March 7, 2018. - REUTERS/Mohamad Torokman

Fatah, the leading Palestinian liberation movement, has launched a well-coordinated campaign designed to defeat Washington’s proposed plan to bring peace to the Middle East. Palestinian leadership totally rejects the proposal and cut off all communications with Washington after it moved the US Embassy from Tel Aviv to Jerusalem.

Jamal AlMuhisin, a member of Fatah's powerful Central Committee, told Al-Monitor the campaign has many aspects. “It will include public demonstrations throughout Palestine, petitions against the deal, and wide-ranging media and publicity [efforts]," AlMuhisin said.

Osama Qawasma, a Fatah spokesman, used his Facebook page to announce the campaign's June 26 launch with a graphic in English and Arabic calling for the defeat of Washington's plan, which proponents sometimes dramatically refer to as the “deal of the century” or the "ultimate deal."

A statement on the site makes it clear: “Anyone participating in the [US] deal in any way, shape or form or promoting it will be considered a traitor. Silence and neutrality toward the dangers of this deal is a national crime."

One of the main graphics used for the campaign calls for bringing down the deal and mentions Jerusalem as the capital of Palestine in both Arabic and English. Another recurring poster has a black and white photo of Palestinian refugees, noting, "No right is lost if someone continues seeking it.”

Jared Kushner, senior White House adviser on the Middle East, is singled out in another graphic, with an "X" over his image and the words “The Deal of the Century can’t stand up to the will of the people of Palestine.” Fatah also created an online petition for people to commit to fighting the deal, and an online poster displays the often-repeated statement of the chief Palestinian negotiator Saeb Erekat: “Palestine is not for sale.” Hanan Ashrawi, a member of the PLO Executive Committee, was also recruited to support the campaign.

Ziad Khalil Abu Zayyad, Fatah’s international media spokesman, told Al-Monitor the Trump administration’s peace process is as extreme as the Israeli right. “President Trump’s administration is blackmailing the Palestinian leadership by stopping its funding to PA institutions and holding meetings with Arab leadership to try to apply by force a ‘peace’ plan whose only purpose is to serve Israeli interests,” he said.

He said the Fatah movement, the Palestinian leadership and others stand steady to reject any plan or offer that comes from the US administration, which sides with Israel. “Palestinians struggled for dozens of years to earn their right in determining their destiny. Any Palestinian matter can only be solved through the Palestinian official and formal representative, the PLO,” he added.

Abu Zayyad also pointed out that though Palestinians spurn the US plan, they are genuinely interested in a just peace. "President Mahmoud Abbas’ international initiative — which calls for the participation of the international community and institutions to solve the Palestinian case and ensure Palestinian rights — remains the only path that would lead to a political movement," he said. "Such a movement would, in turn, save the region from the security risks and instability that will affect all countries in the Middle East.”

Local and regional commentators have also taken on Washington and the Trump administration with scathing editorials and opinion pieces rebutting the publicly known tenants of the agreement, especially regarding Jerusalem and Palestinian refugees. Najeeb Qadoumi, a Fatah leader in Jordan and a member of the Palestinian National Council, wrote under the title, “The deal will not pass,” a widely circulated article repeating many of the arguments against the deal. “Trump and his aides have totally ignored all rights and international conventions. Silence toward this is treason. Anyone who doesn’t put aside smaller differences, not realizing that our main enemy is the Zionist regime, is a traitor, and history will not forgive them.”

Some Arab columnists also haven't spared Arab leaders. Fawzi Samhori, a politically active physician in Jordan, asked what Arab leaders hope to accomplish. “Is this plan aimed, as Abbas has said, at removing the Palestinian 'complication' that is standing in the way of integrating the Zionist regime [with] the Arab world and normalizing relations with the racist leaders of our enemies?”

The campaign against the Trump administration’s unilateral approach to peacemaking will heat up the situation in Palestine and the region. The unprecedented public effort by Fatah against Washington will burn whatever bridges are left for any type of dialogue with the Americans. But then, the United States has already made it clear that it will proceed with its plan with the support of other Arab nations, with or without Abbas' approval.

After Kushner and Jason Greenblatt, Trump’s envoy to the Middle East, dropped some hints about pursuing regime change, Palestinian leadership responded. By going full speed ahead in opposing the Trump deal, Palestinian leaders want to make sure Americans understand that the Palestinian public, and not just its leaders, oppose the US effort to force on them a biased peace formula.