Even before the long-touted US Middle East peace plan is announced, Palestinian officials have already rejected the deal, saying it will inevitably favor Israel. 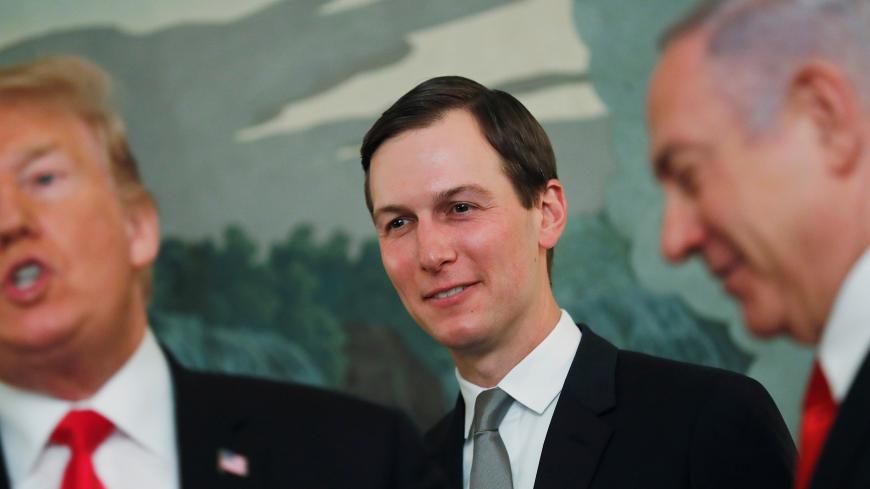 As the rollout for the United States’ long-expected Middle East vision for Israeli-Palestinian peace approaches, Palestinian voices rejecting the process and the authors of the plan have risen.

A White House official speaking to Al-Monitor on condition of anonymity stressed that the US peace team has “written a vision for peace comprised of many pages — enough for each Israeli and Palestinian to read and imagine what peace could look like and what their lives could be if we succeed.”

Jared Kushner, President Donald Trump’s son-in-law and senior adviser who is spearheading efforts to formulate the deal, has said the it would be released after the April 9 Israeli elections. It is not clear if the announcement will be made immediately after the vote or if the US team will wait until a government is formed and confirmed by the Israeli Knesset.

The White House official noted that the US plan, referred to in the Arabic press as the “deal of the century,” is “dozens of pages long and not a simple two- to three-page” plan.

Ghassan Khatib, a senior member of the Palestinian People’s Party and presently a lecturer at Birzeit University, told Al-Monitor that the best way to respond to the US plan is to reject it. “If a plan is made, it should be totally rejected. No one should discuss it or negotiate about it because the United States is unqualified to play the role of arbitrator.”

Khatib, who participated in peace talks in the 1990s, said that the Americans “have violated the 1993 declaration of principles of which Washington was a witness and a guarantor.”

Khatib believes that the Arab peace plan should be supported by a pan-Arab diplomatic effort. In the 2002 Arab Summit held in Beirut, the Arab League presented a comprehensive peace initiative that has been reaffirmed in every Arab summit since.

Aaron Miller, a former Middle East peace envoy for both Republican and Democratic US administrations, told Al-Monitor that he believes that the Trump administration’s plan is possibly 50 pages long. “The logic is to bury the plan in details in order to draw attention away from brevity and generality of treatment of core issues, like the Clinton Parameters.”

Miller, now a senior fellow at the Wilson Center in Washington, believes that “Israel will say yes but so will Arabs, and Palestinians will say no.” The former American diplomat suggests that Washington should focus on Gaza instead. “If Kushner wanted to make an impact, he’d focus on Gaza and cut the economic/political accord between Israel and Hamas,” Miller said.

Nasser Atta, a senior Palestinian reporter for the American ABC News network, told Al-Monitor that Palestinians need a new political strategy. “They have to find new allies and play politics with other forces in the Middle East that are not part of the US allies in the Middle East," he said, suggesting the Palestinian leadership hold talks with Hamas in Gaza without any conditions concerning weapons and form a unity government similar to that of Lebanon, where "Hezbollah civilian nominees are part of the government without the government being delegitimized by the international community."

Atta, however, has little trust in the current leaders whose time, he says, is over. “The current leadership is expired and has nothing to offer to the Palestinian people and should be replaced by a new leadership through elections or another creative way.”

While Palestinians are adamant about rejecting the expected US plan, saying no is about all they can do. At the same time, Washington has lost all its leverage to pressure them. The result will no doubt be a continuation of the status quo, which will be largely pleasing to the Israelis and harmful to Palestinians on the ground.