Now that his trial date is set for March 17, Prime Minister Benjamin Netanyahu needs to win the elections and enact a new law that would postpone the trial until the moment he is no longer prime minister. 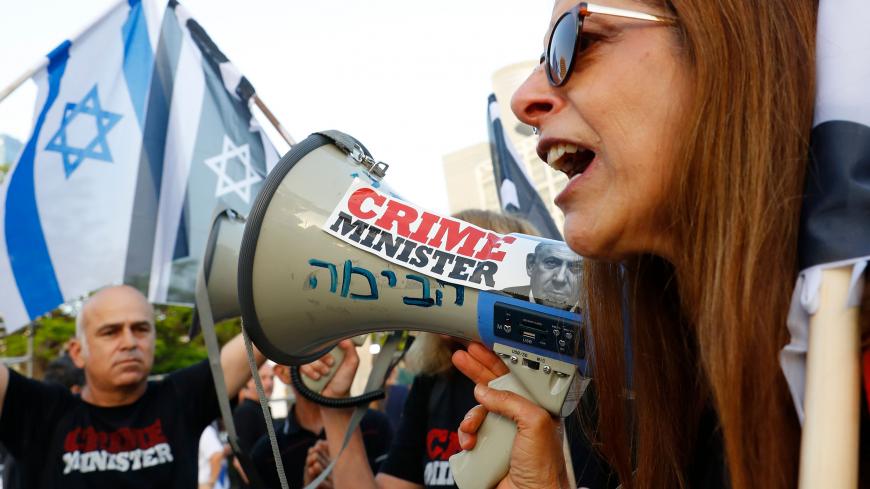 It's now official: Fifteen days after elections, one day after the 23rd Knesset will be sworn in, Israel’s Prime Minister Benjamin Netanyahu will appear for a court hearing at the start of the corruption trial against him. This will happen on March 17 in the Jerusalem District Court. Even if he loses the March 2 elections to Blue and White leader Benny Gantz, Netanyahu will still be serving as prime minister on the first day of his trial — no new government will be composed in the laps of these two weeks. And so, the date will become historical. It will be the first time in the history of the State of Israel that a serving prime minister will be put on trial for indictments filed against him on bribery, fraud and breach of trust.

The event is expected to be especially bizarre because the Jerusalem District Court is situated in East Jerusalem, an area densely populated by Palestinians. Even the name of the street on which the court is situated has symbolic meaning: Salah al-Din, the Muslim leader who defeated the Crusaders in the 1187 battle of Hattin (the Battle of the Horns of Hattin). The prime minister of Israel — one of the most guarded and secured persons in the world — will be forced to appear in a courthouse planted in the very heart of Palestinian East Jerusalem. A reinforced division of guards will be needed to secure him, even before we’ve counted the local and Israeli media that will impose a siege on the event. In light of these factors, chances are high that the court's administration will decide to move the site of the trial to another, less explosive site where the historic event can be conducted under more reasonable conditions.

The decision regarding the opening date of the trial was made Feb. 18 by the presidency of the Jerusalem District Court, and the news took over Israel’s media agenda all at once. Netanyahu was not caught unprepared. Immediately after the broadcasting of the decision, the prime minister invited his rival Benny Gantz to a public debate. This was an attempt on Netanyahu’s part to recapture the agenda and turn public interest away from his trial, but Gantz did not fall into the trap. “You got spooked … so you’re pushing this spin?’’ he tweeted. “Netanyahu awaits a confrontation with the prosecutor in his trial. He’s not relevant anymore. He can’t lead the country. We won’t let him cover up this fact through a fake invitation to a debate,” a senior Blue and White member told Al-Monitor on condition of anonymity.

Israeli law allows a prime minister to continue to serve as such even if they are served with an indictment. A prime minister is forced to resign only after the conclusive court ruling. Nevertheless, it is hard to imagine a situation in which a prime minister shows up each morning at the district court surrounded by dozens of security guards, spends time there until the afternoon hours while simultaneously managing the most complex state on the planet Earth in a role that is viewed as sensitive, explosive and difficult. Netanyahu, on the other hand, claims he will do so easily: “I work 16-17 hours out of every 24-hour day,” Netanyahu said this week in an interview with Army Radio Feb. 18. “So I’ll work 15 hours instead.”

The prime minister acts as if the opening date of the trial has nothing to do with him. He continues his campaign full speed ahead and manages to maintain 30 or more Likud seats in the polls. Blue and White, on the other hand, has not managed to open a serious disparity between them and the Likud, and this political standoff is a real Gordian knot. Meanwhile, the public has lost faith in breaking through this dead end. The fact is that Netanyahu continues to dictate the public agenda and causes significant swathes of the Israeli public to forget their prime minister’s deep criminal entanglements, despite the fact that three indictments are filed against him. This is viewed as typical Netanyahu hocus-pocus. But sometime, sooner or later, the magic dust will settle and Netanyahu will understand the game is over, that he is cornered with real potential for jail time in Maasiyahu Prison where former Prime Minister Ehud Olmert spent over a year.

Netanyahu’s escape strategies from the law are narrowing. His options are closing in on him. The immunity option has been off the table since he withdrew it from the current Knesset. Netanyahu’s lawyers claim he can ask for immunity again, but the likelihood of such a scenario is close to zero. The only thing left for Netanyahu is to try to win the elections. There are three possibilities here: either he will win or lose, or the election tie will remain and no bloc will win a Knesset majority.

The worst option from Netanyahu’s view would be losing to Gantz, who would form a government without him. Under such circumstances, Netanyahu would try for a plea bargain to avoid a trial. The chances are not high that Attorney General Avichai Mandelblit would agree to let Netanyahu off the hook of doing real jail time. Once Netanyahu is no longer a serving prime minister, he won’t have the whole country in his grasp. Public opinion holds that Mandelblit will insist that Netanyahu spend time behind bars — even for a symbolic period.

Should Netanyahu win the elections, he will try to milk his unbelievable achievement for everything it’s worth: He’ll try to assemble a tough right-wing, ultra-Orthodox coalition that would legislate “the French law” on sovereign immunity allowing him to defer his trial to the day after his tenure is over. Or perhaps he'll create a situation allowing him to ask the Knesset for immunity again, despite the fact there is a law forbidding it. If he fails, Netanyahu will insist on serving as prime minister simultaneously with his court case. He’ll ask the court to exempt him from being present in the actual court discussions, and he'll exert heavy pressure on the legal system, appoint a justice minister who will follow his dictums and replace the attorney general with someone who will do his bidding. In short, he will do everything to speed up the self-destruction of the entire system. Israel’s liberal center-left sector views this scenario as a catastrophe.

But what will happen if the more logical scenario takes place: another electoral stalemate? Unclear. If Blue and White will have an advantage of three or four seats, it could demand that Netanyahu forfeit his insistence on serving first in a unity government rotation deal. This demand of Netanyahu is what grounded the entire political system after the September 2019 elections. Should Netanyahu refuse, Gantz and his people will try to undermine the right-wing, ultra-Orthodox bloc and pull out three or four Knesset members or one ultra-Orthodox party in order to create a 61 Knesset-seat majority and establish a government.

If the standoff is more significant, Israel may find itself having to hold its fourth election campaign in a row. Then its nightmare scenario will truly come to life under a serving prime minister who has not earned the trust of the public nor that of the Knesset since 2019 but continues to lead the most complex state in the world.

Good luck to everyone with that!