Egypt said Sunday that it killed the IS militants in a gunfight in Sinai following an IS-claimed attack there last week. 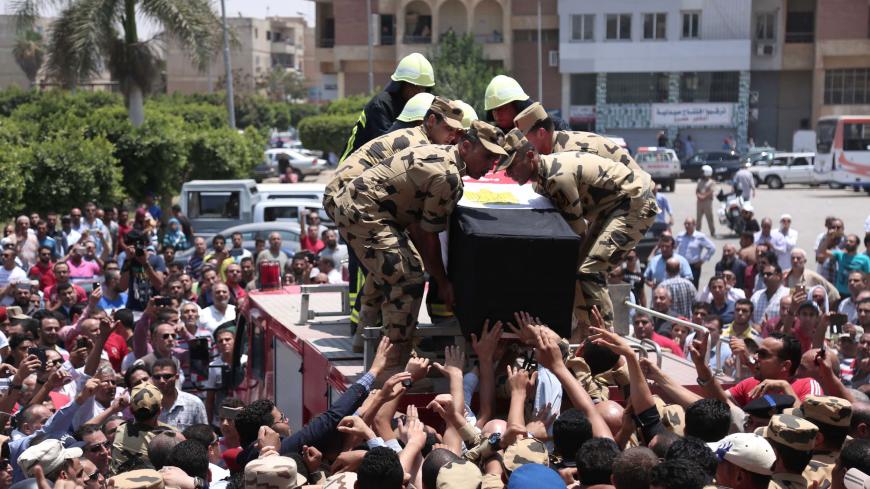 Egyptian soldiers carry the coffin of a soldier who was killed a day earlier in the restive Sinai Peninsula in an attack by the Islamic State group, during a funeral ceremony in 10th of Ramadan city north of Cairo, July 8, 2017. - MAHMOUD BAKKAR/AFP via Getty Images

Egyptian security forces said Sunday that they had killed Islamic State (IS) militants in a battle in the Sinai Peninsula.

Egyptian police raided an IS hideout in a small village and exchanged fire with them, killing 18, according to The Associated Press. Egypt’s Interior Ministry did not say when the firefight took place and The Associated Press could not confirm the information due to press restrictions in the Sinai Peninsula.

In a statement posted to its Facebook page Sunday, the Egyptian army said the military and police destroyed dozens of hideouts, cars and explosive devices belonging to “terrorists” in ground and air raids in Sinai. The statement did not say when the operation took place.

“This confirms the armed forces and police’s continuation in their struggle to find terrorists,” the statement read.

However, the London-based Arabic-language news site Al-Araby Al-Jadeed published an article today with a different version of the events. From Saturday night to Sunday morning, Egyptian police took a group of prisoners to an area in Sinai, sealed it off, and then shot them to death, the article read — citing an unnamed source.

Pictures the army released alongside the statement show men with blurred faces laying on the ground in a desert area.

The announcement follows IS’ April 30 attack on Egyptian soldiers in the Sinai peninsula. Up to 10 soldiers were killed when an improvised explosive device targeted a military vehicle, and IS later claimed credit for the bombing.

The Sinai Peninsula is a strategic area in the Middle East that hosts the Suez Canal and connects to Egypt’s mainland on the African continent. The Egyptian government has plans to develop the desert area with several infrastructure, water and agriculture projects.

Security has long been an issue on the peninsula and for its inhabitants. Last year, some residents told Al-Monitor the Egyptian government forcibly removed them from their homes amid its conflict with IS.