Sinai tribes join the hunt for IS explosives engineers, potentially depriving the terrorist group of its last technique in its fight against the Egyptian army. 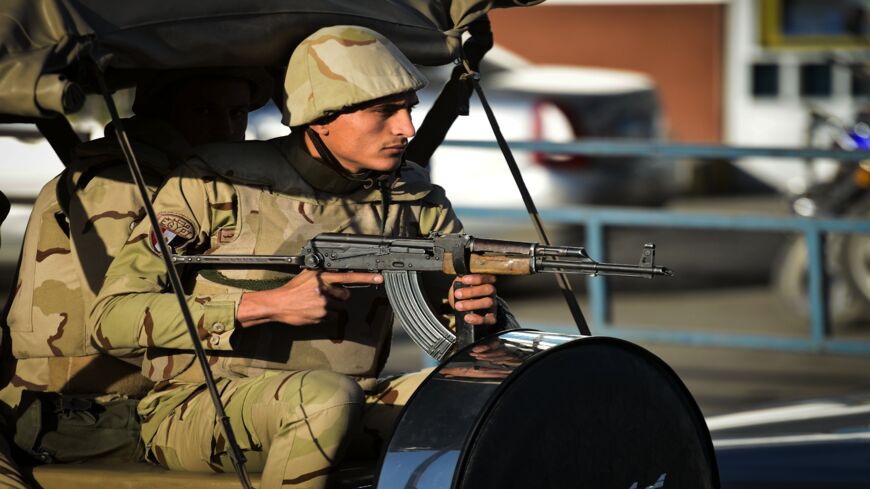 An Egyptian member of the armed forces patrols outside al-Maza military airport where the bodies of the members of security forces, who were killed in North Sinai province during an attack the day before, had been flown on Jan. 30, 2015, in the capital, Cairo. - MOHAMED EL-SHAHED/AFP via Getty Images

CAIRO — An association of Sinai tribes allied with the Egyptian army is hunting down the explosives experts of the Islamic State (IS) branch in this Egyptian territory, which will potentially weaken the branch even more and deprive it of its last survival technique.

IS has resorted to planting explosives on roads used by Egyptian army troops and policemen fighting them in northern and central Sinai.

The terrorist organization succeeded in killing a sizeable number of army troops using this method.

However, the Union of Sinai Tribes, which consists of most of the tribes in northern and central Sinai, works to deprive IS of this tactic by tracking those making the explosives and also those who plant them.

It has so far succeeded in killing several explosives experts and locating explosive devices that would have cost the Egyptian army and police many lives.

The union says it will maintain this drive to the end.

"We are now focused on the people making and planting these explosives, given the heavy human and material toll they cause," a federation official told Al-Monitor on condition of anonymity because he is not authorized to speak to the media.

"We will keep pursuing these people until Sinai is totally safe," he added.

IS usually plants its explosives on the supply routes of the Egyptian army and police.

It uses different tricks to get away with its activities in this regard, including by enlisting the help of children and women in planting explosive devices on roads used by the army and police.

The planting of explosives, military analysts said, was probably IS' technique to compensate for its apparent weaknesses against Egyptian army troops who outnumber the fighters of the terrorist organization and use much more sophisticated weapons.

"IS uses the improvised explosive devices because it is no longer capable of engaging in direct confrontations with the army or police," retired Army Gen. Magdi Shehata told Al-Monitor.

Explosive devices have been a main tool of the terrorist organization since it emerged in Sinai after 2011.

It increased its dependence on this tool in recent years after it received successive blows at the hands of the Egyptian army and police, including ones that caused it to lose a large number of its members and leaders.

The new campaign by the Union of Sinai Tribes comes as the Egyptian army scores repeated successes in the fight against IS in northern and central Sinai.

These successes have recently manifested in the return of hundreds of northern Sinai families to their original homes, years after they had to leave because of the ongoing war between the Egyptian army and the terrorist group.

The return of northern Sinai families to their homes, experts said, highlights growing control by the Egyptian army over Sinai and consequently the growing weaknesses of IS.

"The return of these residents to their homes shows that things are going back to normal in these areas," Khaled Okasha, a member of the Supreme Counterterrorism Council, an advisory body of the Egyptian presidency, told Al-Monitor.

"Security agencies have ensured stability in these areas for a long time before the return of these people to their homes," he added.

The return of Sinai families to their homes also comes as Egypt moves ahead with Sinai's development, which is another detail in Egypt's larger, two-pronged approach to the situation in Sinai — one that relies on improving the economic condition of the territory and ridding it of militancy.

Changing the demographic nature of Sinai, which shares borders with both Israel and the Palestinian Gaza Strip and is almost the size of Israel, the occupied West Bank, Gaza and Lebanon combined, is a central point in the Egyptian government's blueprint for developing Sinai.

Around 60,000 square kilometers in size, Sinai, which is located in the northeastern part of Egypt not far from the Suez Canal, is inhabited by a little more than half a million Egyptians — most of them tribes whose roots date back hundreds of years.

Egypt wants to relocate around 3 million more people to the territory, offering citizens in other parts of the country many incentives, including homes and farms at discounted prices and with easy payment terms.

Deep under the new campaign by the Union of Sinai Tribes is also growing dependence by the Egyptian army on tribes loyal to it in the fight against IS.

The army has been working hard to eradicate IS in Sinai since it emerged.

In 2018, it launched a comprehensive campaign to eliminate the group once and for all.

The campaign has succeeded in significantly undermining the group, leading to the arrest and killing of a large number of its fighters.

Nonetheless, some difficulties remained, especially given the ability of IS pits to hide among civilians and hide their arms and explosives in places difficult to track by the army.

This might have encouraged the army command to increase dependence on Sinai's tribes, especially with tribesmen being more familiar with the geography of Sinai's vast desert and the hideouts of IS terrorists.

"Tribesmen know every detail of the geography of Sinai," Ibrahim Abu Elian, one of Sinai's tribal chiefs, told Al-Monitor. "This is why they aid security agencies in tracking the terrorists and arresting or killing them."

In fighting IS, the Union of Sinai Tribes uses both the stick and the carrot. The federation has hundreds of fighters who have already received training in army camps in guerrilla warfare.

Tribal fighters, sometimes wearing Egyptian army fatigues and carrying modern machine guns and other firearms, raid IS hideouts and gathering places using pickups given to them by the army. Some of the pickups have machine guns mounted on them.

It also appeals to IS fighters to hand themselves over to its members, promising to help them and their families.

The campaign to hunt down IS explosives engineers is part of the final stage of Egypt's war against this terrorist organization, security experts said.

The arrest or killing of explosives experts will deprive IS of its last effective tool in Sinai, the same experts said.

"IS resorts to planting explosives to prove that it is still alive, especially after the successive blows it received at the hands of army troops," Okasha said. "The arrest of the explosives engineers will spell the end of this terrorist organization in Sinai."