Egyptian Army troops and tribal fighters are working to liberate the northwestern Sinai village of Gilbana from IS control as the terrorist group tries to move its command center there. 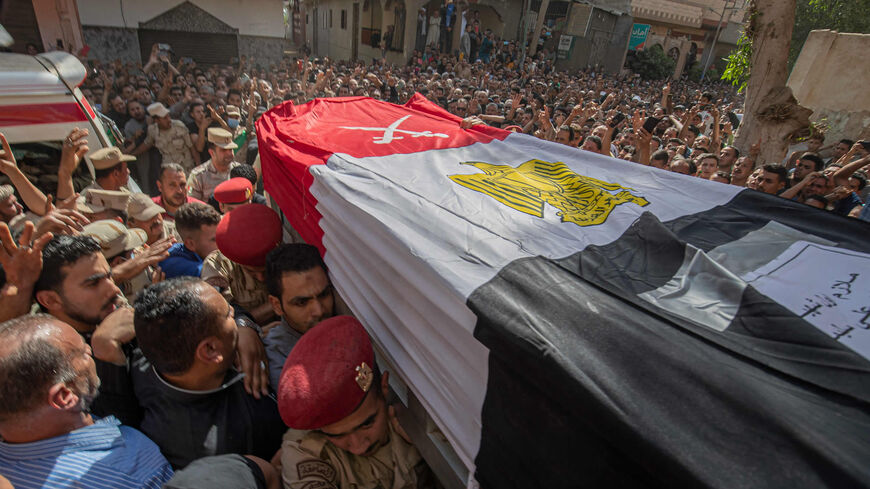 Mourners and soldiers carry the casket of Egyptian 1st Lt. Soleman Ali Soleman, one of 11 soldiers killed in an attack claimed by Wilayat Sinai, during his funeral at a mosque in the village of Jazirat al-Ahrar in Qalyoubiya province, Egypt, May 9, 2022. - Khaled Desouki/AFP via Getty Images

CAIRO — Fierce battles continue to rage between Egyptian army troops — aided by dozens of tribal fighters — and Islamic State-affiliated Wilayat Sinai in the Sinai Peninsula for control over a village close to the Suez Canal.

The battles started Aug. 10, soon after the IS militants overran Gilbana, a village close to the northwestern Sinai city of Bir al-Abd, which is part of the Suez Canal province of Ismailia.

They seized several vehicles, including a food truck that was on its way to the village, planted explosives along roads leading to the village and injured local residents, most of them farmers away from their fields.

Wilayat Sinai has been intensifying its operations, especially the planting of explosives, in different parts of Sinai for several weeks now.

In June, explosive devices planted by the group in the northeastern Sinai towns of Rafah and Sheikh Zuweid killed two tribal fighters and injured two others, along with an army conscript.

The Egyptian army has not released any statements about the battles going on in Gilbana.

However, the Sinai Tribes Union, the umbrella organization of Sinai tribes that assist the army in the fight against IS, published several videos in the past few days, including one on Aug. 15 that shows army helicopters bombing areas in Gilbana, and another on Aug. 17 that shows trucks full of its fighters heading toward the village to fight IS militants.

Sinai tribal leaders believe that the Gilbana battles can be decisive in the Egyptian army's attempts to put an end to the IS presence in Sinai.

"IS terrorists are all gathered in Gilbana now," Sheikh Ibrahim Elian, a tribal chief from Sinai, told Al-Monitor. "This will make it easy for the army and the tribal fighters to get rid of them once and for all."

The Egyptian army has managed to reduce Wilayat Sinai capabilities to a minimum in the past two years, having deployed tens of thousands of troops in Sinai, involved all army branches, including the air force, in its battles against the militants, and dried out the group's supply routes, including by cracking down on a network of smuggling tunnels on the border between Sinai and the Palestinian Gaza Strip.

This success has been manifested in a noticeable drop in IS operations against army troops and policemen in different parts of Sinai, especially its northeastern part.

IS last staged a major operation in Sinai in July 2020, when dozens of its militants attacked an army camp in the northwestern city of Bir al-Abd.

The attack was a clear signal that IS was trying to move its command center to northwestern Sinai, from the northeastern parts of the Egyptian territory where IS established strongholds in the cities of el-Arish and Rafah, close to Egypt's shared border with Israel and Gaza, specialists said.

"The army has succeeded in dealing painful blows to IS in its traditional strongholds in northern Sinai in the past period," Muneer Adeeb, an independent specialist in Islamist movements, told Al-Monitor. "IS dreams of controlling Sinai, but this is a dream that is not easy to be fulfilled."

Nevertheless, the terrorist group maintains a presence in northeastern Sinai, even if minimal.

It tries to make up for the quantitative disadvantages it has against the army and police that outnumber it in terms of troops and equipment by depending on explosive devices that sometimes cause casualties among army and police personnel and tribal fighters.

IS clusters are also present in different areas in northeastern Sinai, according to tribal chiefs.

The shift in IS operations to northwestern Sinai, from the northeastern part of the territory, is viewed by some military experts as a military victory against the terrorist group.

The army, they said, has succeeded in tightening the noose around the terrorists in Rafan, el-Arish and other northeastern Sinai cities.

"The army has succeeded in imposing its full control over these areas," retired army Gen. Hossam Suweilam told Al-Monitor. "But it is important to note that terrorism will continue to be present so long as its funding sources remain intact."

Several factors stand behind this success, including the ability of the Egyptian army to win Sinai tribes to its side in the war, observers said.

The Egyptian army also cracked down on a network of smuggling tunnels along Sinai's border with the Gaza Strip, thus depriving IS of supplies, including new Salafist jihadist recruits from the coastal Palestinian enclave.

Egypt's mending of fences with Hamas, the Palestinian faction that controls Gaza, has also contributed to improving security along Gaza's border with Sinai, preventing Gaza's Salafist jihadists — an avowed enemy of Hamas – from sneaking into Sinai and depriving IS of swelling its ranks by receiving new recruits from the Gaza Strip, observers said.

"Coordination between Egypt and Hamas has led to protecting the shared border between Sinai and Gaza in a great way," Adeeb said. "But it is important to note that this coordination has not eradicated terrorism altogether."

Local newspapers are completely silent on the battles going on in Gilbana village at present.

Nonetheless, the Sinai Tribes Union has published some videos of army troops and its fighters during the battles.

The union also published photos, showing raids by its fighters on IS hideouts and the seizure of explosive devices.

On Aug. 16, the union published a photo of the remains of Hamza Adel Mohamed al-Zamli (aka Abi Kathem al-Maqdissi), a senior IS Sinai leader who hails from the Gaza Strip.

The battles raging on in Gilbana are the closest to the Suez Canal to happen against IS since the terrorist group took root and started growing in Sinai in 2013.

The village, only 20 kilometers (12 miles) from the international maritime passageway, is mainly made up of expansive farmland.

On Aug. 15, local rights group Sinai Foundation for Human Rights quoted some villagers who said the IS militants were not in the village for just a brief period.

"It feels like a nightmare," the group quoted a female villager as saying. "These people are not coming here to stay for a day or two."

Meanwhile, military experts downplay worries that the battles in Gilbana can evolve into threats to navigation in the Suez Canal.

The waterway, they say, is heavily guarded, against attacks by terrorist groups.

"There cannot be any threats to navigation in the canal that is appropriately guarded by the Egyptian army," Suweilam said.