Egyptian-Chinese relations appear to be unshaken after an Egyptian lawyer filed a lawsuit against China for damages due to the coronavirus. 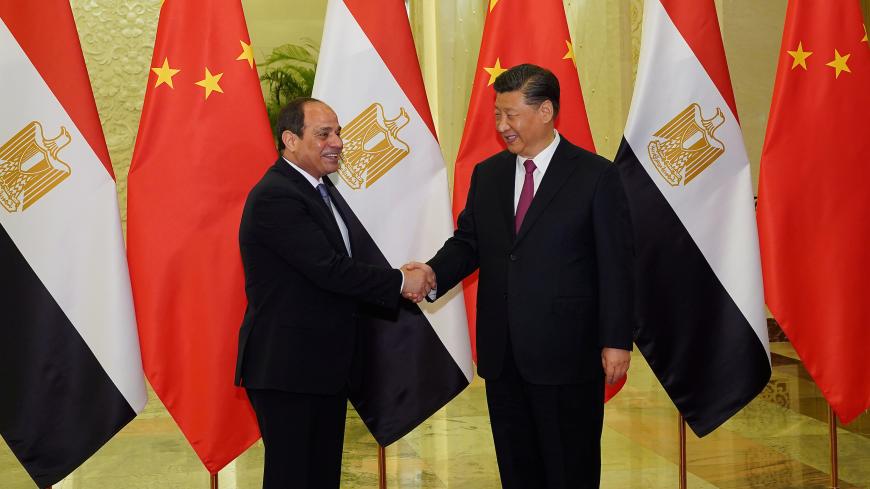 Chinese President Xi Jinping shakes hands with Egypt's President Abdel Fattah al-Sisi before a bilateral meeting of the Second Belt and Road Forum at the Great Hall of the People, in Beijing, China April 25, 2019. - Andrea Verdelli/Pool via REUTERS

Egyptian lawyer Mohamed Talaat is seeking $10 trillion in compensation from the Chinese government for damages sustained by Egypt as a result of the coronavirus outbreak. Earlier this month, Talaat sent the Chinese Embassy in Cairo a formal notice of the lawsuit he intends to file against the Chinese authorities for the harm caused to Egypt by what he called the "Chinese virus."

Announcing his plan to take China to the International Court of Justice in The Hague, Talaat said, "The coronavirus is a biological weapon that was developed in a Chinese lab."

"The US has filed a legal complaint against China over the coronavirus outbreak, so why can't Egypt do the same?" he asked, in reference to a $20 trillion lawsuit filed by American right-wing lawyer Larry Klayman and his advocacy group Freedom Watch March 19. Klayman also claims that the novel coronavirus was "designed by China" to "kill US citizens and other persons and entities in nations perceived to be enemies of China."

Researchers have since discredited the conspiracy theory, with studies suggesting that the virus originated in bats and jumped to humans via an intermediary species such as the pangolin.

Not surprisingly, Talaat's legal claim was met with cynicism from other lawyers. "The Bar Association has made light of my initiative," he complained in comments published in al-Naba newspaper. Furthermore, the International Court of Justice only entertains cases submitted by states, not individuals. And legal complaints can only be communicated through the applicant state's Ministry of Foreign Affairs, not embassies.

The Chinese ambassador to Egypt, Liao Liqiang, slammed the calls for compensation on Twitter April 10.

"Such calls by attention-seekers demanding that China pay compensation can only provoke sarcasm and mockery; they will not affect the traditional deep friendship between China and Egypt," he tweeted in Arabic.

"Any attempts to tarnish China's image and harm its interests will not succeed; China's cordial ties with Egypt are deep-rooted and historical. The governments and peoples of the two countries are diligently working together to defeat the novel coronavirus," he wrote in another tweet.

In a gesture of solidarity and support, China sent medical aid to Egypt April 16 to help contain the spread of the coronavirus. Liqiang said in a virtual press conference that the shipment of 20,000 N95 masks, 10,000 protective suits and 10,000 COVID-19 detection kits was the first of three batches, with a second shipment planned for April 21.

The medical aid from China comes in response to a similar goodwill gesture from Egypt. In early February, the Egyptian government sent 10 tons of medical supplies to China. Health Minister Hala Zayed flew to Beijing in early March to express solidarity with China in its fight against the coronavirus and to learn best practices from China. Zayed praised China's efforts to contain the spread of the virus because they helped avert a wider crisis.

Yet members of Egypt's Chinese community are reporting a surge in anti-China sentiment since the outbreak of the coronavirus. A video posted to social media in early March shows citizens harassing a Chinese man on a busy Cairo highway. "Corona, corona," someone shouts at the bewildered man, who, minutes earlier, had been stranded by his driver. The driver appears at the start of the video, covering his nose and mouth with tissues for fear of being infected by his passenger.

The driver was arrested March 11 for harassment, in what Ambassador Liqiang called "an isolated incident."

Cabinet spokesman Nader Saad also downplayed the incident. "This is by no means a phenomenon; such harassment of Chinese tourists is a rarity in Egypt. The driver has been jailed over the malpractice, and civil society members and youths have apologized to the Chinese man for the unfortunate mishap," he told Al-Monitor.

Commenting on the $10 trillion lawsuit against China, Saad said, "Egyptian law gives citizens the right to file legal complaints against any individual or entity. The government is not responsible for such actions nor can it interfere to prevent the lawyer from pursuing legal channels even if it does not see eye to eye with him on the matter."

But Chinese employees at a healing center in Cairo's upper-class residential district of Maadi complain they are targets for harassment.

"Before the outbreak of the pandemic, I felt at home in Cairo. People were friendly and welcoming," a masseuse told Al-Monitor. "Now, many here associate Asians with the coronavirus and are afraid we [the Chinese] may infect them. I can see the resentment, sometimes fear even, in people's eyes."

The healing center, which offers acupuncture and cupping and a range of other therapeutic services, has been closed since mid-March to prevent the spread of the virus.

Since mid-March, he has offered takeout and delivery services. Yet a rumor spread on social media that the Health Ministry was conducting checks on Chinese restaurants. This has only "exacerbated the already dire situation for Chinese restaurant owners," Chong said. "Even though it is untrue, customers have stayed away and my business has suffered significantly as a result."

Cairo has doubled its efforts in recent years to woo foreign investors, adopting new industrial licensing and investment laws that reduce red tape and offer investors protective measures and incentives. Chinese investments in Egypt are worth nearly $7 billion — and are set to double — and trade volume between the two countries reached nearly $14 billion in 2019. It is little wonder that Cairo is cozying up to its biggest trading partner. The strong economic and trade ties are a win-win for both countries.

President Abdel Fattah al-Sisi perceives China as a political and security superpower and believes that having China as an ally will boost his status internationally. China, meanwhile, sees Egypt as a gateway to the untapped markets of the Middle East and Africa.

The bulk of the Chinese investments are in energy and infrastructure projects, but Egypt is also relying on Chinese companies to build the Suez Canal Economic Zone, promoted on the project's official website as "a world class free zone and trade hub" along the banks of the strategic waterway. China's State Construction Engineering Corporation is also working with Egyptian contractors to build 20 skyscrapers, including Africa's tallest tower in the country's new administrative capital, set to be completed by mid-2022.

There is, however, a bone of contention in the otherwise trouble-free partnership between the two countries: China's meddling in the Nile River Basin. Chinese firms are not only helping build Ethiopia's Renaissance Dam, which Egypt fears will cut into its water supply, but China has also partially funded the dam's construction (contributing $1.8 billion out of the total $4.8 billion funds needed for the project). Cairo is hoping that diplomacy and goodwill gestures may help it win China's backing in its dispute with Ethiopia over Nile waters. It is perhaps to this end that the Egyptian authorities have detained dozens of Uighur Muslim students and deported them to China, where they have been arrested and charged with "spreading extremism."

Since relations between the two countries were elevated to a "comprehensive strategic partnership" in December 2014, Sisi has visited China no fewer than six times. His outreach to China is seen by analysts as a move toward diversifying foreign policy, but Sisi is also seeking to replicate China's transformation from a developing country to an economic powerhouse. And it appears that nothing — not even lawsuits against China or harassment of Chinese tourists — can undermine Chinese-Egyptian relations.