Cairo has taken several new measures to curb the spread of the COVID-19 pandemic, but many Egyptians are skeptical about the government's plans and fear the worst is yet to come. 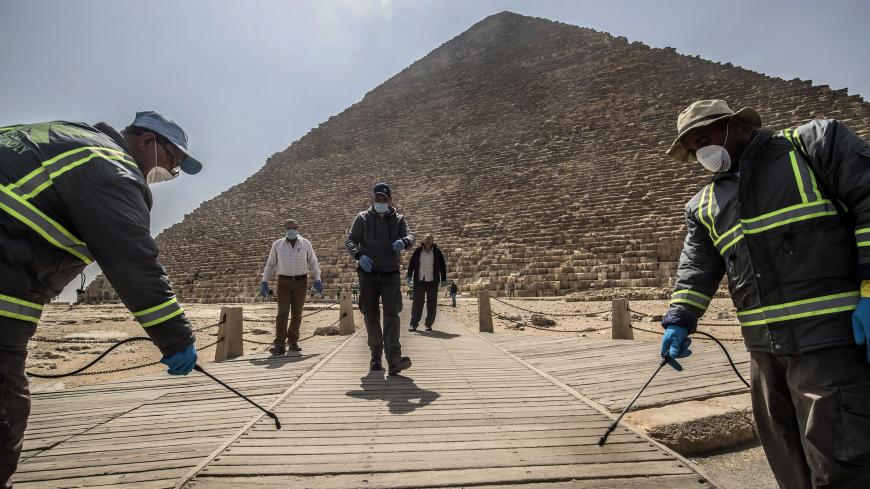 Egyptian municipal workers disinfect the Giza necropolis as protective a measure against the spread of the novel coronavirus, Giza, Egypt, March 25, 2020. - KHALED DESOUKI/AFP via Getty Images

Facing mounting criticism from Egyptian rights organizations and activists over its response to the COVID-19 pandemic, the Egyptian government has stepped up efforts to stem the spread of the virus. The authorities have announced new measures to contain it, including a nationwide curfew from 7 p.m. until 6 a.m. for two weeks effective March 25 and the suspension of all government services save for health care.

In a March 24 press conference broadcast live on national television, Prime Minister Mostafa Madbouly announced the two-week closure of all malls, gyms, sporting clubs, restaurants and cafes, but noted that delivery services would continue during non-curfew hours. He added that all shops except for supermarkets, bakeries and pharmacies would have to close at 5 p.m. on weekdays and remain closed throughout the weekend (Fridays and Saturdays). Public transportation will be halted during curfew hours over the same period. The decision applies to the Cairo metro, the main means of transportation for over 3.5 million commuters daily in the Greater Cairo region.

Punishment for flouting the curfew includes fines of 4,000 Egyptian pounds ($254) — a hefty sum for many Egyptians, as a third of the population lives below the poverty line.

“In addition to the fines, violators may also face jail terms,” warned cabinet spokesperson Nader Saad. Speaking in a March 24 telephone interview broadcast live on Shaabi FM, he said judges would decide on the severity of the punishment for offenders on a case-by-case basis. Schools and universities will remain closed for at least the next two weeks, he added.

Meanwhile, the Ministry of Religious Endowments and Egypt's Orthodox Christian Church have both released statements announcing that they would temporarily halt communal prayers, a move commended by many activists who had shared alarming pictures of congregations at mosques and churches in the past week.

With a total of 536 confirmed coronavirus cases in Egypt including 30 deaths as of Friday afternoon, and with the number of infections expected to rise, the government has intensified its efforts to stem the outbreak. In mid-March, Egypt suspended international flights to and from the country. The authorities also closed schools and universities, banned mass gatherings and shuttered movie theaters at that time.

The Ministry of Health has created a hotline for citizens to report suspected coronavirus cases. “We receive thousands of calls daily, mostly from worried citizens who ask about coronavirus symptoms and seek advice from our staff on where to go if they develop a fever,” said Dalia Nabil, who works at the Ministry of Health in preventive health and supervises the hotline. “They also ask about preventive measures that they can take to reduce the risk of infection,” she added.

“In some cases, such as with individuals who have been in contact with an infected person and had themselves developed worrying symptoms, we send an ambulance to bring them to the hospital in order to minimize contact with other people,” she told Al-Monitor.

Supporters have praised the government's initiatives. Atef Makhalif, a member of the parliament's human rights committee, described the precautionary measures as “unprecedented.”

“Never before have we seen Egyptians come together like this, the government and the people, to confront a threat of this magnitude,” he told Al-Monitor. “The government is working round the clock to counter this enormous challenge.”

The World Health Organization's representative in Egypt, John Jabbour, told CNN that “Egypt and Oman have the best monitoring systems in the region.”

Yet many Egyptians remain skeptical, with some critics accusing the government of a lack of transparency in dealing with the crisis. Before the imposition of the partial curfew, some complained about the authorities' leniency toward “irresponsible” citizens who have ignored the government's calls to stay home. Images of crowded marketplaces, wedding ceremonies, religious celebrations and packed mosques and churches were widely shared over social media with calls on the government to adopt stricter measures to force citizens into self-isolation.

At a March 22 meeting with a group of prominent Egyptian women for Egyptian Mother's Day, President Abdel Fattah al-Sisi insisted his government is handling the pandemic with full transparency. He urged citizens to abide by the government's regulations to limit the spread of the virus.

The meeting was Sisi's first public appearance in two weeks. His noticeable absence prompted some analysts to speculate he may have been quarantined after coming into contact with several high-ranking military officers who had tested positive for the virus.

While the allegation has not been confirmed, the Egyptian press has reported the deaths of two high-ranking military officers due to COVID-19. Hours after the news of their deaths broke, reports emerged that a third senior officer — Maj. Gen. Mahmoud Shahin — had also succumbed to the virus. The news came as a shock to the Egyptian public as an apparent media blackout had kept citizens in the dark about the officers' ailing health.

The new measures to slow the infection rate are Cairo's broadest yet since the outbreak of the pandemic and come on the heels of a rally in Alexandria in the early hours of March 24. Alexandrians were awakened by the marchers' echoing chants of “Allahu Akbar." The demonstrators called on citizens to pray for Egypt's safety. Some burned flags bearing images of the virus or its name. The rally sparked wide controversy on social media, with many observers lambasting the protesters as “reckless” and “ignorant.”

“Protesting in a large group for protection from a virus that is spread in large groups!” read a comment from one Egyptian Facebook user.

“We won't leave, coronavirus must leave!” wrote another, punning on the 2011 uprising slogan chanted by anti-government demonstrators in Tahrir Square.

Humor aside, much of the recent news from Egypt has been grim. At least 26 medical workers have reportedly been infected and Egypt's Medical Syndicate said it has received complaints from several public hospitals in Cairo and other provinces about a shortage in personal protective equipment including masks and sterilization tools, according to the Mada Masr news portal.

The government's plan to curb the spread of the virus has been met with mixed reactions on social media platforms. Some said the measures were “insufficient” and called for a complete lockdown to avert disaster. “Is the virus contagious only after 7 p.m.?” asked one sarcastic Facebook user. Others protested the decision, arguing that even a partial curfew would hurt the poor.

In a heart-wrenching video circulating on Twitter, a young Egyptian woman lashes out at officials for calling on people to stay home: “It’s easy for you to ask people to stay home, but then how do we eat? How do you expect people who rely on their daily wages to survive if they stay home? How do we feed our children?”

The woman's message sounds the alarm about the urgent need for the government to bolster and broaden social safety nets for the country's poorest and most vulnerable, already struggling to survive as a result of tough austerity measures introduced by the government in 2016.

The government has announced a number of economic measures to help businesses weather the storm, including the allocation of 100 billion Egyptian pounds (approximately $6.35 billion) of real estate financing and support for the tourism sector, hard hit by the pandemic. The Central Bank of Egypt has cut interest rates by 3% in a move intended to ease the burden on indebted companies. But the policies will do little to ease the pressure on Egypt's estimated 33 million poor and many are concerned about the grave implications of the crisis.

In a message on Twitter, Sisi expressed hope that Egyptians would abide by the new precautionary regulations “to ensure the safety of Egypt and the Egyptians."