The Ministry of Health has designated a special hotline for Egyptians isolated at home and in quarantine to offer psychological support during the coronavirus pandemic. 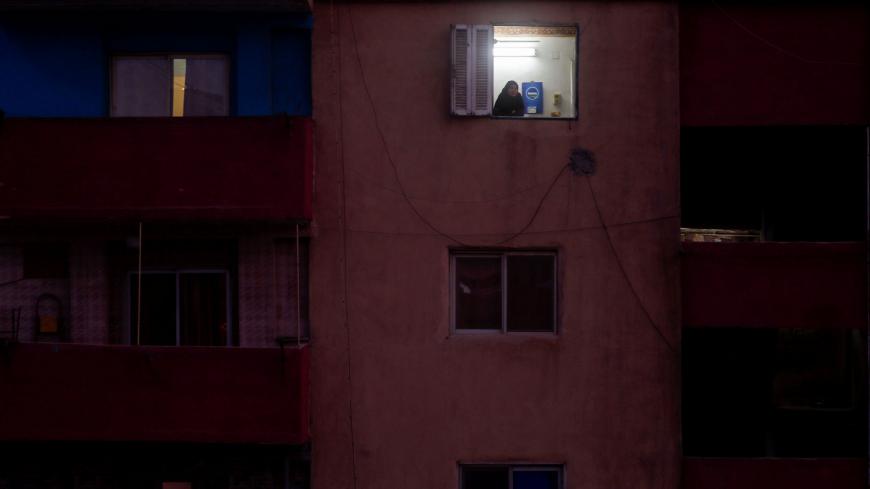 A woman looks from a window at the beginning of a nighttime curfew to contain the spread of coronavirus, Cairo, Egypt, March 26, 2020. - REUTERS/Amr Abdallah Dalsh

CAIRO — Egyptians in need of psychological support because of coronavirus repercussions now have hotlines they can call, provided by the Ministry of Health.

The ministry decided March 31 to allocate hotlines in light of the nighttime curfew imposed to confront the spread of the virus. Dr. Monan Abdel-Maksoud, secretary-general of the General Secretariat of Mental Health and Addiction Treatment with the Ministry of Health, said in a press statement that day that 150 mental health professionals received online training to provide support to coronavirus patients and their families, treatment teams in isolation hospitals and others.

Abdel-Maksoud said fear and anxiety caused by the spread of the coronavirus are normal during this period and must be overcome to avoid negative psychological effects, especially for children and the elderly. The statement further stressed the need for citizens to remain at home to protect themselves against the virus.

The partial curfew, from 7 p.m. until 6 a.m., began March 24 and appears to be taking a toll on people's moods and emotional well-being.

An Egyptian billionaire, the country's second-richest man, has threatened to commit suicide if the curfew is extended beyond April 8. Information Minister Osama Heikal said April 3 that, if necessary to contain the virus, a total curfew could be implemented.

People around the world are suffering from the effects of quarantines and curfews. In Egypt, the streets are empty and calm, especially during curfew hours. Some families are confining themselves in their homes even during non-curfew hours, for fear of catching the virus.

Sarah Sayed, seven months pregnant, was reassured when she was given leave from work. But she told Al-Monitor that staying home all the time is not something she is used to, and she feels constrained and bored. Fearing for the safety of her unborn baby and her 4-year-old daughter, she has been avoiding any contact with people. She was forced to stay in her parents' home to be away from her husband, who goes out to work every day.

Najwa Muhammed, 54, feels the same. She told Al-Monitor, “The feeling of being restrained at home is bad, especially because there is no specific date for the end of these health measures, which may be prolonged.” She added that the constant warnings about the virus posing a greater risk for elderly people makes shopping for household items and being around people major sources of constant fear.

Al-Monitor called the ministry’s hotline and a psychologist answered quickly. He offered several tips on how to deal with a state of permanent stress and anxiety, especially for children. He emphasized the need not to exaggerate when applying health instructions so as to keep from transmitting anxiety to children.

The psychologist recommended getting away from sources of rumors and not to constantly follow news about the epidemic throughout the day. “Specific moments should be allocated for this,” he said. He urged people to benefit from their time at home by taking part in their hobbies and getting closer to family members. He recommended breathing exercises to relieve stress or anxiety attacks.

Al-Monitor contacted Jamal Farwiz, a psychiatry professor at the Military Medical Academy. “Allocating a hotline to provide psychological support to citizens in light of the coronavirus crisis is a very positive step," he said, adding, "Psychological assistance is being provided for everyone to help people deal with the current circumstances while staying at home. It's also offered to people who have caught the virus and their families to improve their psychological state while receiving medical care."

He noted a general sense of fear and anxiety in society, which shouldn't be thought of as pathological anxiety. Farwiz said it's best to stop thinking of home quarantine negatively and instead see it as a positive protective measure. He further stressed the need to not leave except for necessities.

As of April 7, Egypt had reported more than 1,322 confirmed cases of the coronavirus.

Hala Mansour, a sociology professor at Ain Shams University in Cairo, told Al-Monitor that citizens had been committed to home confinement and the curfew in light of frequent news indicating a high number of infection cases. “But they gradually started going out again after getting used to such news,” she noted.

Mansour stressed the need for psychological support at this stage for those infected and those in quarantine in hospitals. “This support is beneficial and helps people heal faster. In general, people who are not affected do not require psychological support. It is, however, absolutely necessary to take the necessary precautions to avoid getting sick.”