Palestinian woman leads fight against coronavirus, while others fall victim to domestic violence

Women are taking the lead in the fight against the COVID-19 outbreak in the Palestinian territories, while at the same the virus has brought more violence and suffering to some women. 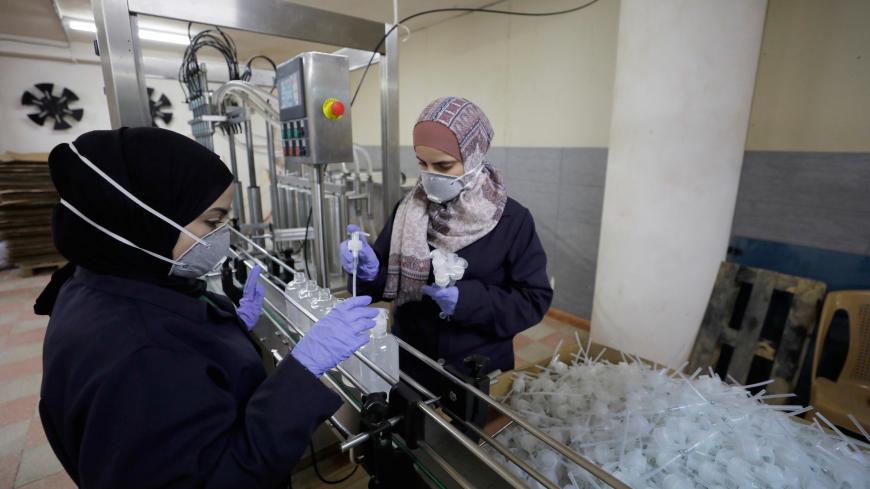 Palestinian women work in a sanitizer factory amid precautions against the coronavirus, in Hebron in the Israeli-occupied West Bank March 12, 2020. - REUTERS/Mussa Qawasma

RAMALLAH, West Bank — Aishya Nimr (known by her nickname Umm Iyad), 58, heads in the early morning to the headquarters of the local council of the village of Qira in Salfit governorate in the northern West Bank to follow up on the council’s emergency procedures as part of the efforts to stem the outbreak of the novel coronavirus.

Umm Iyad has been heading the village council since 2017 and with the virus outbreak, she also started leading the emergency committee formed to this effect.

Umm Iyad told Al-Monitor that she begins her workday by checking up on citizens in home quarantine in the village, whose number amounted to 21 at the beginning of the crisis but had dwindled to one at the time of this writing. She also is handling the issue of 144 of the village's workers in Israel. Most of the rest of the village’s population of 1,370 work in agriculture.

Umm Iyad also visits the checkpoints set up at the two entrances of the village to check up on the security officers before returning to the village council offices.

Umm Iyad is also currently working on a community initiative to cultivate 5 dunums of land and grow vegetables to achieve self-sufficiency for the village’s citizens. The plot of land was offered by a citizen to the people of the village.

On April 22, the first 2,500 seedlings arrived and were planted. “The project requires 18,000 seedlings. We already managed to get some and we are seeking to secure the rest,” she said.

Since the beginning of the virus outbreak and the announcement of a state of emergency by President Mahmoud Abbas on March 5, Umm Iyad managed to equip and turn three apartments and a kindergarten into a quarantine area for those who do not have a place to be confined in. She stressed that she is greatly supported by the council’s members and the townspeople.

This positive image of Palestinian women during a time of pandemic is only one side of the story. The other side is darker and more terrifying with the rising rates of domestic violence, especially against women during the lockdown.

Statistics from the Ministry of Social Development on April 21 showed that “social workers across the Palestinian governorates have been dealing with some 70 women who have been victims of domestic violence since the beginning of 2020 through April 10. Also, 48% of the [cases of] abused women were received during the lockdown period (from March 5 to April 10).”

Minister of Social Development Ahmed Majdalani told Al-Monitor, “Cases of domestic violence, be it physical or verbal abuse, and sexual assaults have increased during the confinement period.” He explained that the “economic and financial crisis also contributes in the increasing violence against women, not to mention the emotional stress resulting from the lockdown.”

Ministry statistics indicated that 40% of women have been subjected to emotional and mental abuse, and 31% to physical abuse. Other women also have suffered other forms of violence, such as restricted freedom, sexual harassment, financial abuse, rape, online bullying and forced marriage.

This has led 60% of the victims to flee their houses and 21% to attempt suicide, not to mention the violence’s negative impact such as physical and mental illnesses, fractures and pregnancy out of wedlock, according to the ministry.

Ministry Undersecretary Dawood al-Deek told Al-Monitor, “The ministry’s studies show that violence against women is likely to rise should the lockdown drag on.” He said, “The ministry’s teams are working on resolving disputes and cases of violence by intervening at people’s homes,” noting that the three shelter centers under the supervision of the ministry in the West Bank are open for battered women. “All precautionary and health measures will be applied for newcomers, most notably a 14-day quarantine period inside the shelter home,” Deek explained.

He added that the actual cases of violence against women is higher than the registered cases at the ministry, as some women turn to social society institutions, which in turn try to mediate to resolve family disputes with social workers. Deek said that since the beginning of 2020, social workers have been working with some 70 women who have been subjected to violence, with a little over a fifth of these referred to women's protection centers under the supervision of the ministry. Shelter centers received six women since the beginning of the coronavirus crisis through April 10.

According to its report, the ministry has also been offering psychological support and guidance to many of the affected women, in addition to other cash and in-kind assistance, emergency aid, medical insurance and economic empowerment, as well as child protection services for the children of violence victims.

The Minister of Women's Affairs, Amal Hamad, told Al-Monitor that the number of complaints that have been lodged with the concerned parties that deal with violence against women this month have spiked compared with the same month last year. “This prompted the ministry to adopt new mechanisms to resolve disputes within households,” she said.

Hamad said her ministry formed support committees in 200 local councils to immediately intervene with families at home, forming specialized committees made up of mental and social health experts. A hotline was also set up to receive complaints from battered and abused women.

An opinion poll conducted by the Arab World for Research and Development, whose results were published April 20, showed that expectations that violence against women will continue increased 53% compared with the last poll published March 31.

The research firm's director, Nader Said, told Al-Monitor that this alarming increase “is a dangerous indicator of societal changes, which must be highlighted and that solutions must be found for.”