In nationwide demonstrations over the last few days, Israeli women are demanding help with the spike violence against women during the COVID-19 crisis. 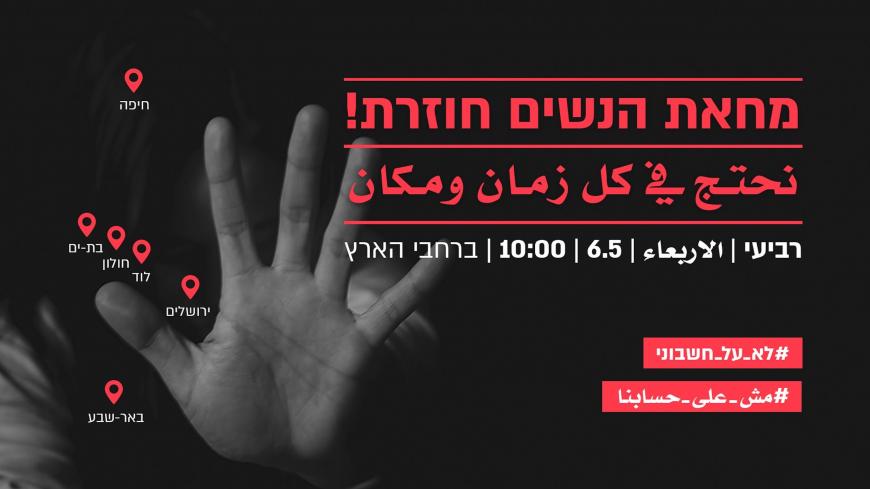 Women Taking Power Israel calls for nationwide protests May 6 in this image uploaded to Facebook.

Five women have been murdered in Israel since the start of the novel coronavirus outbreak, two of them at the end of April.

Figures collected by the Ministry of Welfare since the lockdown began about seven weeks ago show that there were four times as many incidents of violence against women than in the same period last year. In 2019, 13 women were killed in Israel by domestic violence. The past few weeks show a sharp rise in the prevalence of this tragic phenomenon.

Professionals in the field agree that the reason is the extended lockdown, which has forced people to remain at home. Living in such close proximity under tense conditions has had a pressure-cooker effect, increasing the likelihood of violence within the family. Helplines and women’s shelters have reported a rise in the number of women contacting them, but they also note that they are having a hard time providing an adequate response to everyone.

Just a few days ago, two women were murdered by their partners — Mastwell Alaza on April 28 and Tatiana Haikin on May 3. To make matters worse, in both cases, the men had been arrested in the past and even served time in prison for assaulting their partners. Nevertheless, the violence continued after their release as the authorities failed to protect the victims.

Alaza, 37, from Holon, was murdered by her husband after she ignored requests he made at dinnertime. Infuriated, he began to beat her. She tried to defend herself and flee the apartment, but he pulled a knife on her and stabbed her to death in front of their children. Making this tragedy even more infuriating, Alaza was living in a shelter for battered women until recently. She returned to live with her family only when the coronavirus lockdown started. She was hoping to find a more home-like environment, but in the end, she paid dearly for it. Once she arrived home, she was beaten daily until she was finally killed.

Haikin, 50, from Bat Yam, was also killed by her partner. He had already spent time in prison for assaulting her, but upon his release he ignored a restraining order and returned to live with her. She also suffered a brutal death.

This rise in violence against women has led to a wave of nationwide protests and demonstrations over the last few days. The biggest took place on May 6, when hundreds of women gathered in 17 cities across the country to protest the government’s failure to address the phenomenon. The demonstrations were led by women’s groups under the banner, “Not at my expense.” A Facebook page dedicated to the initiative says, “We are the invisible victims of the coronavirus,” and “Violence against women in Israel is reaching unimaginable proportions. Women across the country are paying with their blood.”

In one particularly moving show of solidarity by the “Sisters in Misery,” Jewish and Arab women stood side by side with masks covering their faces to protect themselves from the virus. They had gathered together to demand that the government wake up and enact emergency measures to help women at risk, remove them from their homes and place them in shelters for battered wives.

Naila Awad, the director of Women against Violence and one of the demonstration’s organizers, accuses the authorities of abandoning women. She says that women’s group appealed to the prime minister, the ministers of public security and welfare and the local Arab leadership as well as all members of the Knesset to warn them of the danger. “We let them know that we are caught in a pressure cooker, and it’s about to explode. Israel is abandoning women. It continues to marginalize them everywhere, without batting an eye.’’

On May 3, the Knesset’s Welfare Committee held an emergency meeting to discuss the rise in violence against women since the start of the pandemic. During its discussions, participants heard reports about two women who committed suicide after being subjected to violence during the lockdown. Both women were unable to convince the authorities to remove them from the home.

The chair of Israel’s Union of Social Workers, Inbal Hermoni, painted a grim picture for the Knesset committee about the rise in violence in the Bedouin community since the start of the lockdown. According to her, domestic violence is twice as common in this group as in the rest of the country. Hermoni explains that the women affected are constantly with their abusers and have no way to file their complaints.

The Ministry of Welfare is experimenting with housing abusive men who were removed from the home but have nowhere else to go because of the crisis in hotels and hostels across the country.

In Israel today, there is no such thing as compulsory mental health treatment or therapy for men who abuse their partners. While men can receive help and therapy from centers to prevent family violence, they make up only about a quarter of the people being helped by such facilities. All the rest are women and children.