More women are reporting abuse and domestic violence in Lebanon as the country's citizens remain stuck at home to stem the spread of the novel coronavirus. 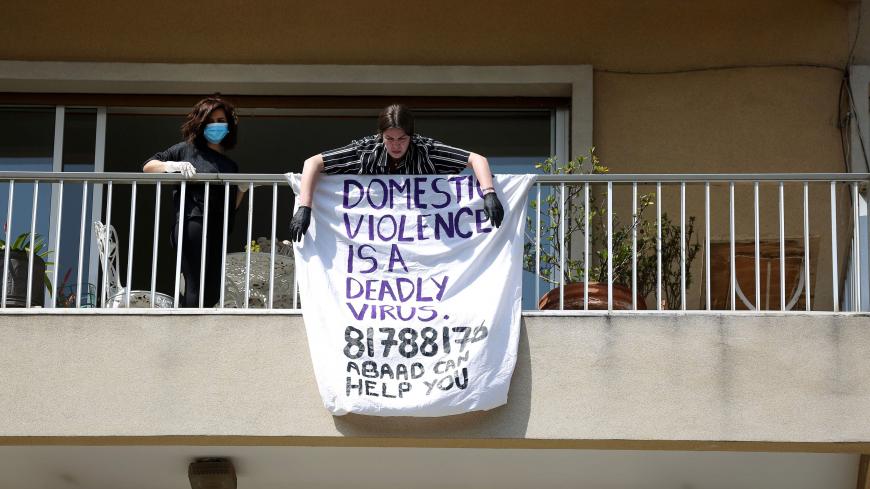 Residents hang a banner from their balcony promoting a hotline for victims of domestic violence, Beirut, Lebanon, April 16, 2020. - PATRICK BAZ/Abaad/AFP via Getty Images

BEIRUT — Aya, a pseudonym for a married Lebanese woman in her mid-20s with a little daughter, told Al-Monitor, “Ever since quarantine began, my body has been bruised. Is this the body of a woman leading a normal life? My husband beats me for the silliest reasons, sometimes for not cleaning the house well or for being on the phone too long.”

She explained, “He beat me even before the coronavirus broke out, but not as much as now. As he is not working at the moment and his patience is running out, as he claims, I have become his punching bag!”

Aya went on, “I thought a lot about separation, but I have no place to go. I even contemplated committing suicide, but who would take care of my daughter? I left my husband’s place once and went to my parents’ house a year ago. My mother told me that him beating me was better than being a drunkard or cheating on me! Sadly, this is how our society thinks.”

Aya is one of many women and girls who face domestic abuse in Lebanon from their husbands, fathers or family members. Domestic violence has surged since the Lebanese government imposed a mandatory quarantine to limit the coronavirus outbreak in the country.

Domestic violence affects not only women but also children, and it ranges from verbal and psychological to physical and even sexual abuse. Recent reports indicate that the surge in domestic violence under lockdown is not limited to Lebanon, but part of a wide global trend.

On April 17, a man shot his mother and sister dead in Jdita in the Bekaa Vally, according to a statement from the Lebanese army.

On April 4, a woman was stabbed in Bar Elias in the Bekaa, and her family accused the husband of abusing her. The woman remains in the hospital. Another man beat his five-year-old daughter to death in Tripoli in north Lebanon.

A source from the Internal Security Forces told Al-Monitor that calls to the domestic violence hotline increased by 110% in March 2020, with 97 complaints compared to 44 in March 2019. The source said, “Complaints were on the rise as of the beginning of 2020, the same time as the quarantine, and perhaps due to the difficult living conditions.”

Lebanon broke out in mass protests in October last year over deteriorating economic and financial conditions in the country. But the protests have largely stopped because of the lockdown imposed by the government to stem the spread of the virus.

The same source noted, “Complaints vary in their level of danger. Some women call asking for shelter and they are advised to go to local organizations specialized in fighting violence against women. Others ask for guidance on filing a complaint. In some cases, they ask for security assistance to leave the house, in which case a military car is sent to aid them. Some women tell us there is imminent danger to their lives, and we raid the house in that case. We deal with each situation on a case-by-case basis.”

Many complaints have been lodged with organizations that deal with violence against women, but many women dare not speak out for fear of their aggressors.

The National Commission for Lebanese Women was established in 1998 with the goal of achieving gender equality. With the cooperation of the Internal Security Forces, the commission launched a national campaign in early April to encourage women to report domestic violence, whether they experience or witness it.

The non-governmental Abaad organization, established in 2011 to fight for gender equality, called on people to stand on their balconies April 16 and hang sheets with the number of the domestic violence hotline to show solidarity and reassure battered women that help is available. The campaign was dubbed #LockDownNotLockUp.

Anani noted that during the lockdown, women tend to seek three things from the organization: advice and psychological support, financial support and shelter at an average of four to six requests per week. Abaad provides baskets of supplies for women who take advantage of the organization's services.

She noted, “The government must add the domestic violence issue to its emergency plan on the [coronavirus] situation. This should be on its list of priorities. Abused women, for instance, should be exempt from the cost of health and psychological treatment, and they should have a national rescue plan. The accommodation capacity of shelters should also be boosted, as there are only six shelters now, and three of them are Abaad’s.”

One woman who called Abaad said her husband abused her verbally and physically. She said, “I don’t sleep at all. I am stressed and terrified. He has become angrier during the lockdown. I tried to leave, but I have no place to go to. Each day, he shouts and screams, barely provides food, and he might hurt [my son and me].”

Kafa, a non-governmental organization established in 2005 to fight gender discrimination, expressed concern in a March report that domestic violence could increase in the coming weeks if the lockdown is extended and the economic situation continues to deteriorate.

Lawyer Lina Zgheib told Al-Monitor, “The 2014 domestic violence law that the Lebanese Parliament passed in 2014 promotes the rights of women and their safety and equality between men and women. However, it has a loophole in that it gives a limited definition of domestic violence and does not fully protect women. For instance, it does not criminalize or mention marital rape.”

Clinical psychologist Nabil Khoury told Al-Monitor, “A harmonious couple can face the difficulties and obstacles of life, including the coronavirus and economic crises. If the couple isn’t culturally and intellectually harmonious and the two people have to remain under one roof due to the lockdown, many problems arise.”