As sexual and domestic violence complaints mount, Lebanese women's rights activists fear that violence against women in the country may be rising as women grow emboldened to resist abuse. 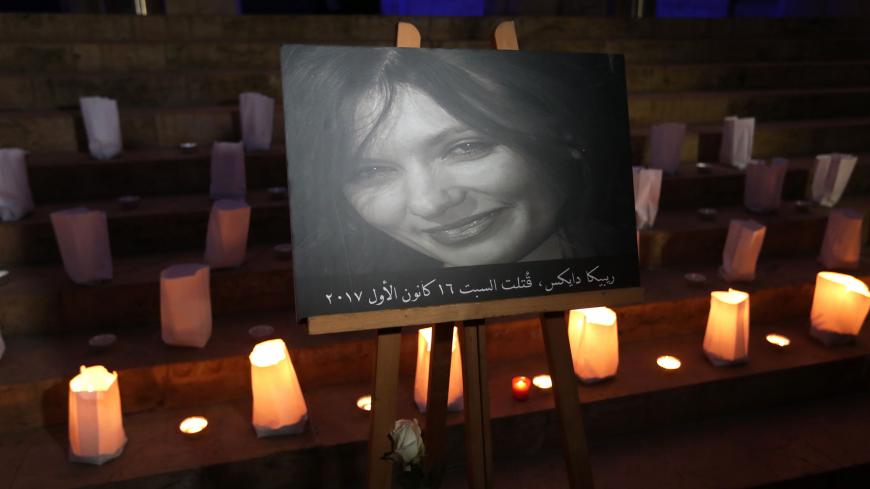 A portrait of British Embassy worker Rebecca Dykes seen during a candle vigil to raise awareness of violence against women and mourn the lives of four women, including Dykes, who were all killed in Lebanon in separate incidents over a single week, Beirut, Lebanon, Dec. 23, 2017. - ANWAR AMRO/AFP/Getty Images

Nada Bahlawan was shot and killed by her husband at dawn Jan. 22 in Beirut. The same day, a man stabbed his wife in south Lebanon after a dispute over doing the dishes. On Dec. 16, British diplomat Rebecca Dykes was raped and murdered.

Nine women were killed in December and January by their fiances or husbands. There seems to have been a rise since Dykes was killed, feminist activist Maya Ammar told Al-Monitor. She and others held a vigil in front of Beirut’s National Museum on Jan. 23.

“In the last week of December, four women were killed. The night we organized the vigil about violence against women, we learned about Malak Moukdad, who was stabbed to death by her husband. Two days later, a woman killed herself because she couldn’t handle the violence at home,” Ammar added.

On Jan. 6, Zarifa Z. was stoned to death and her body was found on a beach in south Lebanon five days later. Her husband admitted to having committed an honor killing. A woman and her baby were found dead on Jan. 12, killed by repeated blows to the head.

Ghida Anani, the director of ABAAD, a nongovernmental organization (NGO) that fights for gender equality, told Al-Monitor, “With the absence of national statistics on domestic violence in Lebanon and monitoring mechanisms, we cannot confirm for sure if domestic violence crimes are rising.”

She added, “What can be confirmed for certain is a rise in women’s awareness about reporting domestic violence incidents, seeking help outside their social and family spheres and disclosing [what happened to them], as the stigma around gender-based violence has been broken thanks to the persistent efforts of women’s movements and campaigns in the last decade.”

However, Minister of Women’s Affairs Jean Ogasapian told Al-Monitor, “The people working in specialized associations and NGOs say that at least 12 women die annually as a result of their husband’s violence.”

“It was not the first time that we've had no cases for two months and then five in a week,” Ammar said. “Because people can now see the situation is changing, women no longer accept violence and discrimination. There is some resistance and backlash from some men who want to prove they still have power in an extreme way.”

Women are seeking support from the ABAAD-affiliated Model Community Holistic Care Unit, which provides safe spaces for women in the north, Bekaa Valley, south, Beirut and Mount Lebanon provinces. The centers were established in partnership with the Ministry of Social Affairs. Based on that and on the number of women turning to these emergency safe houses, Anani observed that violence against women in 2017 seems to be changing in nature. There is more sexual violence reported than physical and psychological violence and murders are more common than in previous years. The civil society NGO Lebanon Support and the feminist organization Kafa (Enough) developed a map to display statistics on violence against women per year. In 2017, 12 women have been killed, five more than in 2016, most of them victims of their husband, ex-husband, fiance or boyfriend.

Law 293 was adopted in April 2014 to address domestic violence, but several organizations have criticized it for being incomplete. Human Rights Watch said after the law passed that it “has serious flaws and the parliament should consider amendments to fully protect women from domestic violence.” The law defines domestic violence very narrowly, doesn’t criminalize marital rape except if physical violence can be proven. Protection orders are a difficult and lengthy process to obtain.

“According to recent NGO reports on the Lebanese judicial system, the number of unofficial documented cases of women killed as a result of family violence crimes since Law 293 was passed reached 40, and the number of official protection orders issued to date exceeds 500,” Ogasapian said. The data shows that a growing number of women know they can be protected and don’t hesitate to ask for help.

“The work done by the judges is very encouraging since the law passed, they answer to these women with efficiency,” Kafa media and communication officer Diala Haidar told Al-Monitor. “We have been campaigning in the media and social networks for years and now women are becoming more aware. But the media shouldn’t hesitate to call these crimes femicides and should stop being apologetic toward the killer, like we see sometimes.”

Kafa has been collaborating with the Ministry of Justice to amend Law 293 with a draft proposition that was accepted by the government in August 2017. They are now waiting for the vote by Lebanese parliament. “In light of all these recent crimes, we hope the vote will be pushed forward,” Haidar said. The draft amendments will improve the implementation of the law, for example with a faster process for a protective order, stricter penalties and immediate custody rights for the mother in cases of domestic violence.

The Ministry of Women also started to develop an action plan for gender equality. “We are in the process of developing a national strategy on gender-based violence,” Ogasapian said. “It will be developed with an action plan and a monitoring process and be submitted for implementation with the relevant stakeholders.”

He added, “We are conducting a study on the economic cost of gender-based violence in Lebanon. It will result in the development of policies to prevent violence against women.”

Ogasapian insisted that the ministry is taking the issue of women’s rights very seriously, with seven draft laws processed in a year. “Three draft laws were approved by the council of ministers and now sent to the parliament for approval: one against sexual harassment, one granting paternity leave and another for equal privileges in Social Security funds. We are also supporting all the amendments proposed to Law 293.”

Even if the draft amendments are passed and applied quickly, some fear the Lebanese justice system is too slow to prosecute these crimes fast enough for the victims' families. “Roula Yaacoub's murderer still hasn’t faced a judge since 2013,” Haidar pointed out. “This needs to change.”