Women's rights activists say that abolishing Article 522 of the Lebanese penal code is only one step toward protecting women from sexual abuse and violence, as more laws need to be amended. 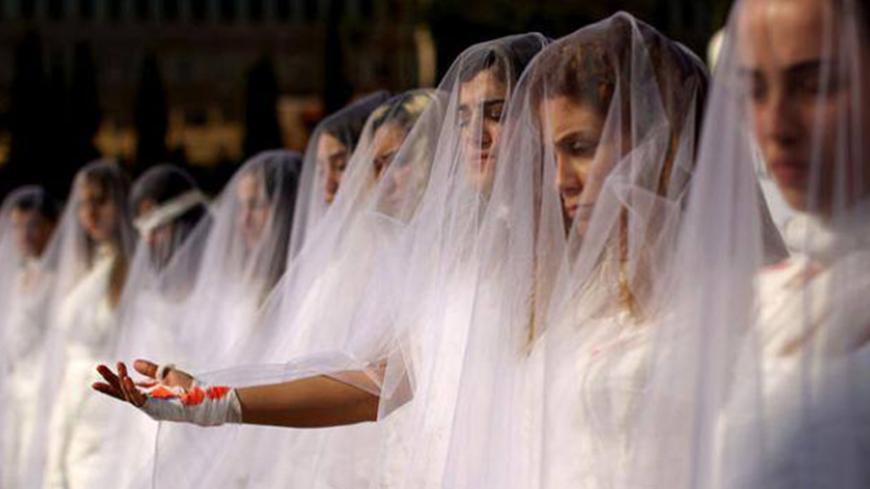 Women take part in a silent protest to press for the abolition of penal code Article 522 in Beirut, Dec. 6, 2016. - Facebook/shbpp

The Lebanese parliament’s Administration and Justice Committee agreed Dec. 7 to abolish Article 522 of the penal code, which allows rapists to avoid prosecution if they marry their victims. The committee is currently discussing a draft law that will be presented later on to parliament, and it is considering amending articles 503-522 about misdemeanors and honor violations, by adding penalties and forcing stricter punishments.

Civil society and feminist organizations have been asking for the abolition of Article 522 of the penal code, nicknamed the “rape law,” for years. The first step taken by Lebanese lawmakers not only invalidates it but also improves the law for women and against rape in general. This was made possible by a very strong advocacy campaign led by the nongovernmental organization ABAAD, which gathered data and statistics on public opinion in Lebanon about that law and talked with lawmakers.

For example, only 1% of the Lebanese knew about this law, according to a 2016 survey by ABAAD. “Article 522 is from the French mandate,” Soulayma Mardam-Bey, the communications officer for ABAAD, told Al-Monitor.

“It provides that in the event of a regular marriage between the perpetrator of a rape and his victim, all proceedings against him shall be suspended and, if conviction is pronounced, the execution of the sentence shall also be suspended. We consider that this article is a violation of human rights and questions women's and girls' rights to dignity. Through this campaign, we want the repeal of Article 522, to emphasize that rape is a crime and as such must be punished, and to insist on the fact that it is the right of every woman to refuse to marry her rapist and that it is necessary to put an end to the stigmatization. Some women are actually forced by their family to marry their rapist for a question of honor,” Mardam-Bey explained. Although no statistics can be found on how many women are affected in the country, around three women per week reported sexual abuse in 2016, according to the Internal Security Forces.

Lebanese Forces parliament member Elie Keyrouz presented the new draft law. “I have asked for the law to be taken away because I consider that it aims directly [at] the Lebanese woman, as in her human value, pride and the safety of her physical, mental and emotional state,” Keyrouz told Al-Monitor.

Keyrouz said the article in question is unsuitable for Lebanon, noting that other Arab countries had repealed similar statutes. "Article 522 has been part of the Lebanese laws for 70 years; the time has come to get rid of it and empower women to be able to defend themselves,” Keyrouz added. Egypt repealed Article 291 in 1999, while Morocco repealed Article 475 in 2014, two years after a 16-year-old girl killed herself after being forced to marry her rapist.

In 2016, 1,976 young women benefited from the Women and Girls Safe Spaces set up by ABAAD in 2015, which provides psychosocial activities, follow-up and psychological support, legal advice and representation in court, and emergency shelter for women fleeing violence or high-risk situations. Of these 1,976, ABAAD cannot provide information on how many married their rapists. “The subject is extremely sensitive,” Mardam-Bey insisted.

“Between the pain of rape, forced marriage and taboos related to sexuality, few women dare to express themselves clearly on this subject. Female victims of violence, whether under Article 522 or not, suffer from feelings of inferiority and rejection. They lose self-confidence, feel abandoned and isolated, and suffer a sense of exclusion and stigmatization. If there are certain psychological predispositions, this can lead to psychological decompensation such as depression, suicidal behavior, etc.,” she added.

For these reasons, Al-Monitor could not meet any woman who had been forced to marry her rapist, as not to affect her healing process.

For Mardam-Bey, this legal step is part of “cumulative victories, which will enable us one day to achieve legal equality between the male and female citizens in Lebanon.” This step comes after the adoption of the domestic violence law in April 2014 that guarantees more protection for women and children from violence in a household. But organizations still ask for this law to be changed to improve protection for women, as well as a regulation against early marriage and the right of women to pass their nationality on to their children.

The parliament has now to confirm the Administration and Justice Committee's decision for Article 522 to be legally repealed. “It's a process that could lead for this decision to be mitigated,” Maya Ammar, the media officer for the nongovernmental organization Kafa, told Al-Monitor. “We have to wait and see carefully what is going to happen at the parliament.”