The Qawem platform receives more than 300 assistance requests a day from women and girls who have been subjected to sexual extortion. 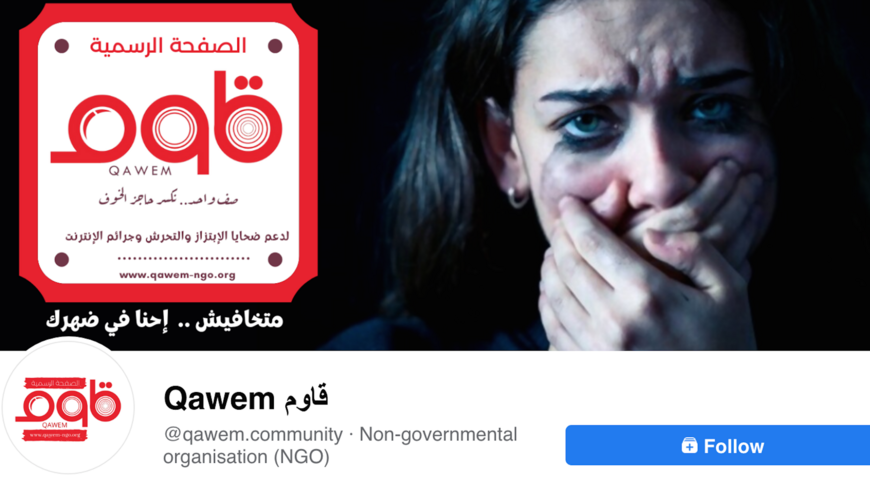 CAIRO — Statistics on violence and crimes against women released on Aug. 17 by the nongovernmental organization Edraak Foundation for Development and Equality indicated that only six cases of sexual extortion were reported in the second quarter of 2021.

Although this figure suggests that very few Egyptian women are victims of this crime, the reality is very different, according to Mohammed al-Yamani, the administrator and director of a platform called Qawem, which provides protection and support for women and girls against sexual violence and extortion.

Sexual extortion involves the use of sexually explicit or suggestive content such as photos, videos and messages to extort money or to coerce the victim into sex.

Yamani created a Facebook page called Qawem (Arabic for “Resist”) in June 2020 to help victims of sexual extortion. As of August, the page has more than 490,000 followers.

“I used to assist victims of sextortion through my personal Facebook page. I decided to create Qawem after the suicide of a teenager, whose friends reached out for me after she had been threatened with sextortion; but unfortunately, I could not help her. I was angry because of the teenager’s suicide and anger encouraged me to establish Qawem to fight extorters,” Yamani said.

Commenting on Qawem’s role, he said, “The platform directs each victim to the best possible solution based on her case. A team of 20 female volunteers receives the cases and assistance requests through the page around the clock.”

He added, “The team is trained to provide psychological support and advice for the victims to deal with the extorter and defend their legal rights. The team also gathers all data and evidence, which are sent to a team of 300 volunteers trained on negotiating with the extorters to get them to stop the extortion and return the content to the victims.”

Al-Monitor viewed some screenshots of conversations between the Qawem team and survivors, whose identities the team (Qawem) hid to maintain confidentiality and protect their privacy and safety. Recalling typical cases, Yamani said the team managed to negotiate one extorter to return a young woman's sensitive content. She thanked them, saying she could now take her final university exams and “walk in the street with my head high and unafraid.”

The second victim recounted that she was sextorted by someone close to her after he won her trust and convinced her to send sexually explicit content that he later used to extort her.

Yamani said Qawem has been able to help all the women and girls who asked for assistance in one way or another. He explained there are various means available in addition to negotiation, such as providing psychological support to the victims and families to help them file complaints against the extorters because many families are reluctant to report these crimes out of shame or stigmatization.

Lawyer Hassan Shilbaya told Al-Monitor that there are laws against all kinds of crimes of violence or extortion, including sexual extortion online.

Shilbaya added that the community has a role to play in ending violence and sextortion against women, saying, “The community needs to cooperate with the state apparatus to end this phenomenon and Qawem is a good example of this cooperation.”

Under Article 327 of Egypt’s Penal Code, threatening to divulge information "outraging one's honor, accompanied with a demand or instruction, shall be punished with imprisonment.”

Article 25 and Article 26 of Egypt’s Anti-Cyber and Information Technology Crimes law stipulate that violations of personal privacy and data is punishable by six years in prison and a fine ranging from 5,000 to 100,000 Egyptian pounds ($318 to $6,357).

Yamani agreed with Shilbaya, saying that the legal system can deter extorters and end this phenomenon if people are aware of it and willing to take legal action. He said there is a need to raise awareness of this legal recourse in schools, universities and workplaces, he added.

“Many victims fear reporting these crimes, considering them scandals, though the investigations are kept fully confidential by the state apparatus, which are making the best effort to end the phenomena of sextortion. Some victims also fear legal accountability for the photos or videos used,” though they are not accountable for any crime in such cases according to the Egyptian laws, he explained.

“Most alarmingly, 70% of the cases we helped resolve ended by simply making the extorter aware that what he was doing was a crime. Many extorters are not aware that what they are doing is an outright crime that could cost them several years in prison.”

Yamani and his team are working to turn Qawem into a civil foundation licensed by the Ministry of Social Solidarity, through a legal process that may require months. They are also working on a website and an application to facilitate outreach and contacts with victims.