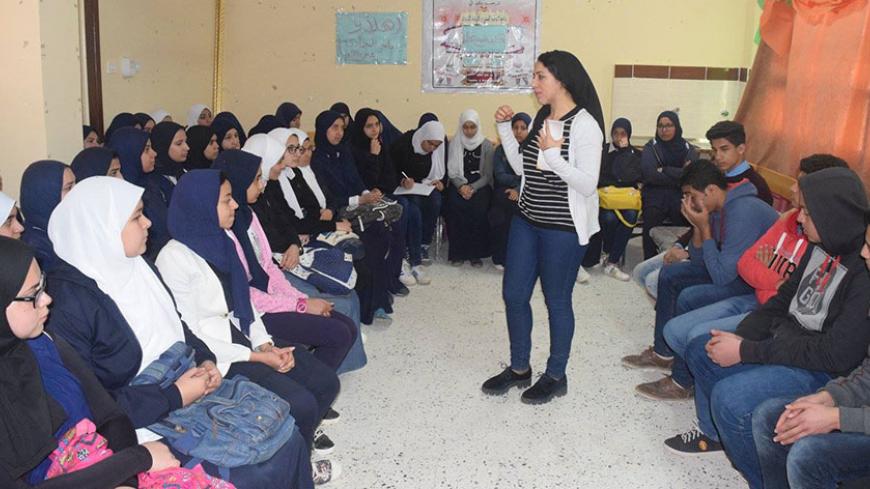 Hadia Abdul Fattah, the founder of the initiative "We will not remain silent on sexual harassment," leads a a workshop in an image uploaded March 23, 2017. - Facebook/domiat.anti.harassment 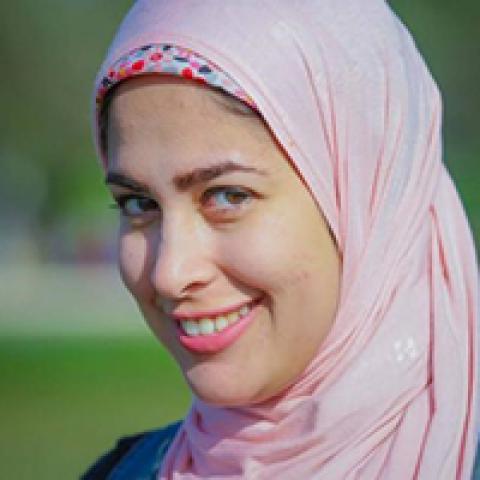 CAIRO — In a recently leaked audio recording that went viral on social media, Cairo University media professor Yaseen Lasheen allegedly is heard sexually harassing an anonymous student and trying to blackmail her. The case is not the first accusation against Lasheen, who was already under investigation by the university for other reasons, and it brings the subject of sexual harassment in Egypt's educational institutions to the public's attention once again.

Lasheen has denied all allegations against him.

The Aug. 4 leak prompted Hadia Abdul Fattah, a women’s activist and founder of the Egyptian initiative “We will not remain silent on sexual harassment," to call upon Egyptian women to share their stories through the hashtag “I_was_harassed by_my_teacher” on their Facebook pages.

She launched the initiative in June 2016, calling for combating sexual harassment and encouraging girls to speak up through workshops and awareness campaigns. Abdul Fattah said she was first harassed when she was in fifth grade. She told Al-Monitor that she decided to launch the hashtag last year to expose harassing professors, who use their position to do whatever they want.

She also blames parents partly for their daughters’ hardships. “Parents do not let their daughters speak up about harassment for fear of scandal, teaching them since early childhood to keep these matters a secret and not to talk about them,” she said.

Abdul Fattah describes the Egyptian penal code as “faulty” because it fails to provide adequate protection against sexual harassment. She believes university policies to combat sexual harassment are “ineffective,” as victims are required to provide proof, such as text messages, Facebook chats or an eyewitness.

“Most of the time, girls cannot provide any proof or evidence and if they manage to make an audio recording, it is not admissible" in courts because it is illegal to record someone without a public prosecutor's permission, she said.

Abdul Fattah called for a unified law to fight all forms of violence against women, encouraging all victims to report sexual harassment.

Former Egyptian President Adly Mansour issued a law in 2014 amending the penal code to expand the definition of sexual harassment and increase the punishment for those found guilty. The law calls for at least six months in prison and/or a fine of 3,000-5,000 Egyptian pounds ($167-$279).

In her story, Fatima, a pseudonym, said her university professor failed her because she rejected his sexual advances.

In response to the leaked audio recording, Cairo University's media school issued a statement Aug. 9 stressing that it does not tolerate any behavior that might prejudice the legal framework or moral norms of the university.

In an Aug. 6 television statement, Cairo University President Mohamed Othman al-Khesht said the case has been referred to the prosecutor's office and if Lasheen is found guilty, he will be sanctioned.

This was also confirmed by Ghada Ali, the deputy director of the university's anti-harassment unit, who told Al-Monitor, “Although the victim — the owner of the leaked audio recording — did not file an official complaint against the university professor, we referred the case to the public prosecutor along with previous accusations against him, as he allegedly accepted gifts and bribes from students [to pass his courses]. He was suspended from work in April and has been under investigation since then."

Commenting on reports that any lawsuit to this effect will be dropped because the recording is not legal proof, Ali said, “Audio recordings are no longer considered evidence, as per a decision by the public prosecution in 2012. But we cannot turn a deaf ear to such incidents occurring on campus. We need more evidence such as a text messages or eyewitnesses to support the statements of the victim.”

Ali noted that since the anti-harassment unit was launched three years ago, it has received at least 30 complaints. “Many measures were taken in this regard. Accused members of the university’s administrative body were deprived of promotion. We are very careful in dealing with proven harassment cases as this could harm the reputation of the university,” she said.

Commenting on whether the number of complaints reflects the extent of sexual harassment against women, Ali said, “Maybe it does not reflect the actual reality of harassment on the ground, but it is at least an indicator of awareness within the university, which was the first to establish a unit to combat sexual harassment.”

She added, “We provide female students with psychological and legal support and guarantee complete confidentiality in the reported cases. Yet young women were raised in a society promoting the culture of shame and therefore they tend to be afraid of speaking up for fear of a scandal. We are working on changing this mindset by raising awareness through relevant publications, training courses and other events."

The leaked audio recording is not the first of its kind in Egypt’s universities; dozens of decisions have been issued by the boards of various universities in recent years regarding cases of harassment.

A 2013 study conducted by the Institute of National Planning and financed by UN Women revealed that the rate of sexual harassment incidents in educational institutions in Egypt stood at 27.3% in 2013.

The Central Agency for Public Mobilization and Statistics said in its 2015 report, titled "The Economic Cost of Gender-Based Violence Survey," that about 16,000 Egyptian women 18 years and older were reported to have suffered harassment on campuses of Egyptian educational institutions.

Meanwhile, Entissar al-Saeed, the director of the Cairo Foundation for Development and Law, told Al-Monitor that professors who harass female students must be punished, and their punishment will help deter others so universities can remain a platform for science and culture.

Saeed called on female students to report harassment incidents, asserting that all civil society organizations will support them. "When they keep silent, the harassed young women are silencing the voices of other women who might muster the courage to speak up in the future,” she said.