How feminist groups are taking on post-revolution Egypt

Egyptian activists have been establishing groups and campaigns to raise awareness and fight sexual harassment since the revolutions erupted in Egypt. 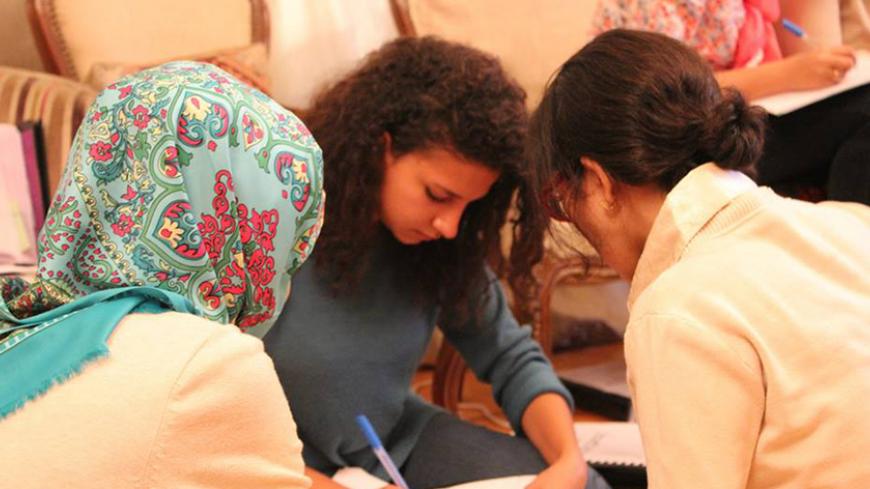 A group of women take part in a workshop organized by Nazra, an Egyptian feminist organization that works to support female activists in their fight against sexual harassment and for gender equality, Nov. 11, 2013. - Facebook.com/Nazra for Feminist Studies

In 2012, international media talked about collective rapes targeting women in the protests in Tahrir Square for the first time. In reaction, several civil groups, such as Tahrir Bodyguard, OpAntiSH and Basma, were created to protect women and establish actions to prevent rape during the protests. Three years later, they had to change their way of action, from emergency to sustainability, with more or less success.

The Egyptian revolution, from 2011 to 2014, seems to have brought together and strengthened civil initiatives against sexual harassment and for gender equality. “The feminist group called Nazra exists since 2005, and was working mainly on helping women to represent themselves in the 2010 parliamentary elections. But it became more active in 2011 as women started to be more involved in the public sphere,” Mahy Hassan, who is in charge of the Women Human Rights Defender Program in Nazra, told Al-Monitor.

“So we started a program based on human rights, gender and feminism, as well as coordinating with other anti-harassment groups to provide medical and legal assistance to the women who have been raped during protests,” she said.

Nazra activists documented around 500 sexual assaults and rapes — which were kept anonymous — in downtown Cairo between 2012 and 2014, and initiated a “feminist school” in 2013 and a 10-day workshop for the public and activists to learn about feminism, gender, stereotypes and violence.

“All of this was made possible because more people got involved in these issues during the revolution,” Hassan said. She added, “We had a bigger team and started more programs, and I don't feel that motivation has decreased since then.”

One of the groups created in 2012 that Nazra was coordinating with is OpAntiSH, Operation Anti-Sexual Harassment/Assault. In November 2012, a group of young people — both politicized internationals and Egyptians who participated in the revolution — started activities of direct intervention to get victims of aggression out of the crowd at Tahrir Square.

“We would take them [women] to safe places close to the square thanks to friends making their apartment available to us, and bring them to their friends or family, and sometimes to the hospital if necessary,” Leslie Piquemal, in charge of logistics at OpAntiSH, told Al-Monitor.

Piquemal added, “Some women tried to file complaints at police stations in 2013, but no trial was successful. The police is not trained to deal with this kind of situation, so most victims don't even try.”

With the end of the protests a few weeks after Abdel Fattah al-Sisi’s electoral victory in June 2014, the group didn't need to intervene in protests anymore, so it became gradually inactive.

“It was hard to keep in touch with all the volunteers. Around 300 people participated [in our activities] for two years, and the 2013 policies restricting the registration of associations to avoid the creation of Muslim Brotherhood organizations made it very hard for us to gather. In 2014, a lot of people got arrested, not only Muslim Brotherhood [members], and activists were just exhausted. The police came back to Tahrir Square [after Sisi’s election]; there was a lot of violence and clashes in the streets, so it was impossible to keep going,” Piquemal said.

With new security threats and the breathlessness of the revolution in Egypt, the activists never got to move to new kinds of activities. She added, “We got together in a time of emergency, and our friends were getting raped. But after working so hard for two years, I guess it became too hard to convert ourselves to an awareness group; we were not specialized in that matter.”

Launched at the same time as OpAntiSH and Tahrir Bodyguard, Basma also started out as an emergency action group to protect women in crowds, but managed to evolve with around 10 permanent members working full time to develop new and sustainable activities of anti-harassment and female political representation.

“We started reading and analyzing gender and social issues to help create a safe space for everyone,” Nihal Saad Zaghloul, one of the founders of Basma, told Al-Monitor.

She said, “Revolution makes you feel you want to do more to change this unfair system; we channeled our anger for a positive change. Of course some lost motivation so we separated from 40 people in the process, but we still have many volunteers we work with."

The group also works with the government through the Ministry of Youth, which gathered feminist organizations to organize a clear plan to fight the issue, “but it was not really efficient,” Mohanad Sangary, Basma’s communications officer, told Al-Monitor.

“We also kept patrolling in the metro and in the streets, but it's more of a way of approaching and sensitizing people to the issue than fixing it," he said. He added, "For now, we don't want to expand at a big level because it is not sustainable, so we make calculated moves."

Slow but steady, the Basma organization tries to be more efficient “through baby steps, because we think that education to gender-biased issues is the only way for a long-term solution,” Zaghloul insisted.

The focus these groups had on sexual harassment seems to have pushed younger people to involve themselves in different ways to change the social system, such as the Students' Scientific Society, Cairo’s local branch of the International Federation of Medical Students' Association. Through Cairo’s medical university campus at Cairo University, students established an anti-sexual harassment unit supervised by the president of the university in 2015.

“The aim of our project was to raise awareness about the types of sexual harassment, what is harassment and how to report an incident,” Nourane Aref Khoweiled, the local officer of sexual and reproductive health at Cairo University, told Al-Monitor.

“On campus, we are trying to cover all aspects of the topic and announcing that we are here to help students report any incident and assure that the university will carry out an investigation and take adequate actions, while reassuring victims that the process is confidential, even if the harassers are their professors,” Khoweiled said.

Before launching the campaign, the unit received special training with HarassMap, which encourages people to report cases of harassment in the streets through mobile applications and a hotline, therefore building a map showing areas with different rates of incidents and then training people in this area to fight against harassment.

“Throughout our training session, we concluded that it’s really hard to know what is the actual cause of such a disturbing phenomenon, but it’s unacceptable and inexcusable under any circumstances,” Khoweiled insisted. She added, “And whatever the reason, we should take action and help limit it.”

As young people like Khoweiled started their own initiatives and leftist feminist organizations developed their own actions, the future seems brighter for Egyptian women. A law against harassment was even launched in June 2014, but it is still too soon to determine the effect it will have on a long-term perspective.