Sexual assaults on women, including around Tahrir Square, are on the rise, but women are organizing to fight back, reports Sarah el-Sirgany from Cairo. 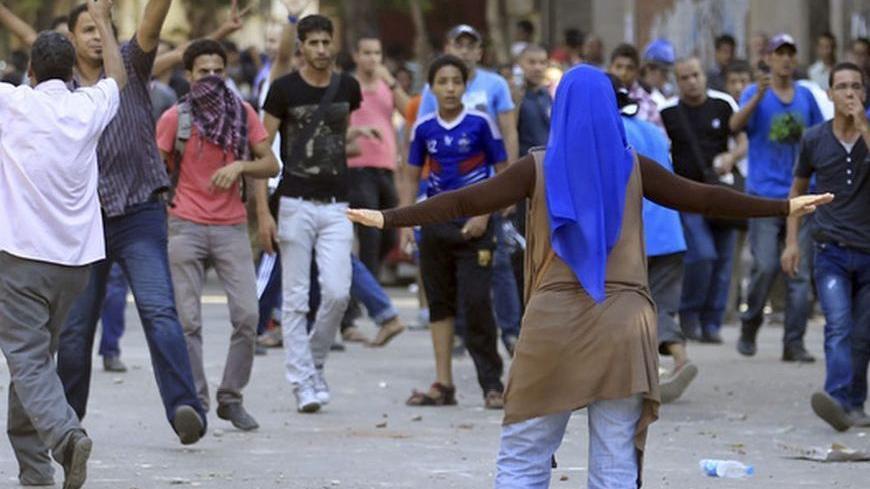 A woman stands in front of protesters during clashes between supporters and opponents of the Muslim Brotherhood and President Mohamed Mursi in Tahrir square in Cairo October 12, 2012.

Cairo — In the crowd, a group of men surround a woman. They close in on her, with hands groping every inch of her body, stripping her of her clothes and raping her with their fingers. The unstoppable frenzy of invading hands intensifies as the mob grows in size.

Similar accounts of group assaults during major demonstrations and clashes have been on the rise. It’s nothing new to Egypt, but seems now to be centralized in and around Tahrir Square, at least in reported cases over the past 21 months. The tactic has been employed by the state against female activists starting in May 2005. Some classify it as a strictly social phenomenon when it takes place during holiday celebrations, an occurence that has been reported regularly since 2006.

The end result is the same, though: The iconic square is increasingly viewed as unsafe for women.

It’s a form of punishment for revolutionaries, according to Dalia Abdel Hameed, gender and women’s rights officer at the Egyptian Initiative for Personal Rights (EIPR). She said, “The easiest way to punish women in this country is through sexuality. In a culture that blames the victim, women start to believe that they shouldn’t go to the square.”

Last month, groups fighting sexual harassment and other independent activists called volunteers to unite and organize individual efforts in fighting the mob assaults on women. The aim is to provide a “safe square for everyone,” as Operation Anti-Sexual Harassment writes on the T-shirts worn by its volunteers.

Members of the recently formed group say they’ve seen indications that at least some of these assaults are planned.

“We are not discounting daily sexual harassment or mob mentality,” said Reem Labib, one of the key activists behind the initiative. But the timing of the attacks (simultaneously between 7 p.m. and 12 a.m.), the relentlessness of the harassers — who insist on continuing their assault despite violent intervention — and the patterns detected in their movements all indicate organized activity.

Victims’ and rescuers’ testimonials reflect evidence of coordination. “One of them went down to take off my shoes during the attack so [others] could take my pants off,” one victim told me. One rescuer said he saw the assailants switch between beating and groping the woman, to get her to protect her face rather than push their hands off her body.

The top indicator of organized behavior is the weapons involved. Several rescuers said in some cases, they were faced with knives the minute they intervened.

The group addresses both types of assaults: teenagers taking advantage of the crowd — the “opportunity harassers” that are easily scared away, as Labib said — and others who are organized and politically motivated. Its aim is to eliminate the factors hampering women’s participation in street action. The group’s approach prioritizes women’s physical safety and psychological well-being.

Activists brainstormed together on the most effective methods to do that. In a meeting on Nov. 29, the eve of a "million-man march" on Tahrir, they shared these findings with dozens of volunteers at the EIPR office. Some of the guidelines were circulated online.

Their approach is rooted in an understanding of Tahrir Square and observations of crowd movement, previous mob assaults and intervention experiences.

Individual rescue efforts relied on using force to disperse crowds. A group of former victims and rescuers came up with a calmer approach to make intervention easier and less traumatizing to the women. The avoidance of violence helps to diffuse the crowd before the tipping point at which “the group gets bigger and mob mentality takes over,” said Labib. They also want to avoid the state of confusion in which rescuers hit each other and some assailants pretend to protect the woman.

Volunteers learned how to keep from attracting harassers and passive onlookers. They were instructed not to use violence except if needed in self defense. They learned how to push their way through the crowd to reach the woman and form a human cordon around her — and most importantly, how to deal with the victim herself.

Don’t touch her unless she reaches out; give her space and keep telling her your name, the written instructions say.

Female participation is key in this group, not just in offering first aid or emotional support, but in engagement with the harassers.

“The solution is not just for men to defend us. We, too, have to participate,” said Labib. “I believe it’s a women’s fight.”

Last June, Labib herself was assaulted by a mob. It was seeing a familiar face reaching out in the crowd that made it less painful. The sight of a woman among frenetic men usually has the same effect on the victim.

Female rescuers who push through the crowd are often harassed and could face the same fate as the victims they are trying to pull out. “Going into this knowing [what you’ll face] gives you certain shield,” Labib said.

“The entire revolution is a dangerous experience. You can’t stop doing something just because it’s dangerous,” said Abdel-Hameed, who is also part of the initiative, explaining that women’s presence has repeatedly proven to calm down the chaotic crowd.

Other groups prefer to work with men-only volunteers. They use force to break through and disperse the harassers, and regard the participation of female rescuers as potentially obstructive. Mahmoud Othman, a volunteer with the newly formed group Tahrir Bodyguards, said he would be worried about his fellow female rescuer rather than focusing on reaching the victim.

This worst-case scenario is what happened with film director and volunteer Aida El-Khashef on Nov. 30. She fought through groping hands to reach a woman trapped inside. She recalled the relief on the victim’s face when she saw her.

“I reached out to hold her hand and comforted her,” El-Khashef said. She managed to steer the woman out, but was immediately pulled back by the men. It took another group, led by a female friend brandishing a taser, to rescue her.

Three days later, El-Kashef addressed the second meeting of volunteers with advice to women on what to do and what to wear during rescue missions.

In a later interview, El-Kashef echoed a view shared by numerous female activists. “I can take shotgun pellets and live ammunition rather than live through this again.”

On that Friday, the presence of volunteers sporting anti-harassment T-shirts reportedly reduced individual harassment and mob assaults in some problem spots. It also left some volunteers in tears after failing to rescue some women. In their next meeting on Monday, their numbers more than tripled.

Sarah El Sirgany is a Cairo-based independent journalist. She contributes to Al-Akhbar in Lebanon and CNN, among other regional and international publications and networks. Follow her on twitter: @Ssirgany.